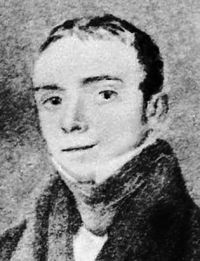 Let my name burn through all dark history,
Over the waves of time...

The doctor and poet Thomas Lovell Beddoes, who committed suicide in 1849, was famous for his obsession with death. He published very little during his own lifetime, but his posthumously published plays and poems contain some amazingly morbid material, which express his grim vision of the world as a single vast necropolis in which Death is the only God. It's good stuff. If you like that kind of thing.

Thou art so silent, lady; and I utter
Shadows of words...

Some of them would make good foundations for D&D scenarios.

1: Earth Keeps A Dead World's City In Her Heart

I followed once a fleet and mighty serpent
Into a cavern in a mountain’s side;
And, wading many lakes, descending gulphs,
At last I reached the ruins of a city,
Built not like ours but of another world,
As if the aged earth had loved in youth
The mightiest city of a perished planet,
And kept the image of it in her heart,
So dream-like, shadowy, and spectral was it.
Nought seemed alive there, and the bony dead
Were of another world the skeletons.
The mammoth, ribbed like to an arched cathedral,
Lay there, and ruins of great creatures else
More like a shipwrecked fleet, too vast they seemed
For all the life that is to animate:
And vegetable rocks, tall sculptured palms,
Pines grown, not hewn, in stone; and giant ferns,
Whose earthquake-shaken leaves bore graves for nests.

(From 'The Subterranean City'.)

2: The Planets Were Shipwrecked. Worms Ate The Sun.

Like some great, ruinous dream of broken worlds
Tumbling through heaven, or Tartarus’ panting jaws
Open above the sun. Sky was there none,
Nor earth, nor water: but confusion strange;
Mountainous ribs and adamantine limbs
Of bursten worlds, and brazen pinions vast
Of planets ship-wrecked; many a wrinkled sun
Ate to the core by worms, with lightnings crushed;
And drossy bolts, melting like noonday snow.
Old towers of heaven were there, and fragments bright
Of the cerulean battlements, o’erthrown
When the gods struggled for the throne of light;
And ‘mid them all a living mystery,
A shapeless image, or a vision wrapt
In clouds, and guessed at by its fearful shade;
Most like a ghost of the eternal flame,
An indistinct and unembodied horror
Which prophecies have told of...

Listen, lord.
Time was when Death was young and pitiful,
Though callous now by use: and then there dwelt,
In the thin world above, a beauteous Arab,
Unmated yet and boyish. To his couch
At night, which shone so starry through the boughs,
A pale flower-breathed nymph with dewy hair
Would often come, but all her love was silent;
And ne’er by day-light could he gaze upon her,
For ray by ray, as morning came, she paled,
And like a snow of air dissolv’d i’ th’ light,
Leaving behind a stalk with lilies hung,
Round which her womanish graces had assembled.

So did the early love-time of his with delight: but when, compelled at length,
He left the wilds and woods for riotous camps
And cities full of men, he saw no more,
Tho’ prayed and wept for, his old bed-time vision,
The pale dissolving maiden. He would wander
Sleepless about the waste, benighted fields,
Asking the speechless shadows of his thoughts
“Who shared my couch? Who was my love? Where is she?”

Thus passing through a grassy burial-ground,
Wherein a new-dug grave gaped wide for food,
“Who was she?” cried he, and the earthy mouth
Did move its nettle-bearded lips together,
And said “‘Twas I—I, Death: behold our child!”
The wanderer looked, and on the lap of the pit
A young child slept as at a mother’s breast.
He raised it and he reared it. From that infant
My race, the death-begotten, draw their blood:
Our prayer for the diseased works more than medicine;
Our blessings oft secure grey hairs and happy
To new-born infants; and, in case of need,
The dead and gone are re-begotten by us,
And motherlessly born to second life.

Be merry, ye rich fiends! Piety’s dead,
And the world left a legacy to you.
Under the green-sod are your coffins packed,
So thick they break each other. The days come
When scarce a lover, for his maiden’s hair,
Can pluck a stalk whose rose draws not its hue
Out of a hate-killed heart. Nature’s polluted,
There’s man in every secret corner of her,
Doing damned wicked deeds. Thou art old, world,
A hoary atheistic murderous star:
I wish that thou would’st die, or could’st be slain,
Hell-hearted bastard of the sun.
O that the twenty coming years were over!
Then should I be at rest, where ruined arches
Shut out the troublesome unghostly day...

(Anyone who wants much, much more in the same vein should take a look here!)
Posted by Joseph Manola at 14:19

Email ThisBlogThis!Share to TwitterShare to FacebookShare to Pinterest
Labels: Shut up about poetry already, Victorian weirdness