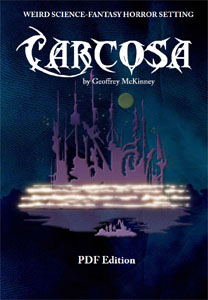 I know it's been out for years, but I've only just got around to reading Geoffrey McKinney's Carcosa. I remembered it being somewhat controversial when it came out, so I was braced for something fairly horrible, but as usual I needn't have bothered. Yes, it contains descriptions of evil magic ceremonies in which the horrible ritual requirements are actually spelled out rather than covered up with some kind of vague mumbling about 'unspeakable horrors': conjuring this god requires you to disembowel this many children, binding that one requires you to rape and murder that kind of virgin, and so on. But the language is all factual, and the result is that the rituals form a kind of cook-book of atrocity: do this and this and this and you'll get such-and-such a result. It's not presented salaciously, and the most obvious use for this material is as a crib-sheet to help heroic PCs foil the rituals of crazy sorcerers: 'He's only drowned three kids so far! If we can save the fourth one, then the god will eat him rather than obey him when it arrives!'

That said, yes, the material involved in many of these rituals is sufficiently horrible that I'd be unlikely to use it in any game I actually ran. But speaking as someone who spends quite a lot of time reading and thinking about real and fictional atrocities - I have to, it's my job - I actually appreciate McKinney's specificity. I know that the point of the old 'Unimaginable tortures! Unspeakable cruelties!' routine is to allow each individual reader to imagine whatever they're comfortable with imagining, and nothing more; but it also contributes to a mystification of acts of evil and violence which they really don't deserve. There's nothing mystical about extreme violence, and while it might often be hard to understand why people do such things to one another, it's usually pretty straightforward to understand the acts themselves: human bodies are made out of meat, and there's only so many ways to damage one. A sorcerer who commits unspeakable horrors upon his victims has done something pretty damn impressive; but one who just ties six guys to stakes and disembowels them doesn't get to partake of the same spurious grandeur. He's not a mystic. He's just a butcher.

(Incidentally, this is why one part of Death Frost Doom I didn't really go for was the idea that simply reading the book which describes all the horrible things the cult had done to its victims had the power to dramatically and permanently affect the minds of its readers. I've read plenty of atrocity catalogues myself, and I can attest that they don't drive you mad; they just leave you feeling numb and sad and sick and, in an odd way, slightly bored. Like I say, there's only so many ways that human beings can hurt each other, so one needs to expect a lot of repetition.)

Anyway. In case you don't know already, Carcosa describes itself as 'a weird science-fantasy horror setting'. It's set on a distant planet in the Hyades Cluster, where human tribes scavenge amongst the ruins of fallen, pre-human civilisations, and it does a great job of evoking the mood of its setting; everything is ruined and broken and ancient and probably incomprehensible to human minds. The humans of Carcosa aren't dwarves standing on the shoulders of giants; they're dwarves who have built themselves crude homes inside a dead giant's ribcage, and occasionally wonder how on earth they're supposed to open that hundred-foot-high door over there. Oh, and occasionally a particularly evil and crazy dwarf will murder all the others in an attempt to exert magical control over the dead giant's now-feral housecat. It usually doesn't go very well.

However, despite the doomy nature of its setting, and the fact that most people in Carcosa - PCs very much included - are going to live pretty horrible lives, the setting didn't feel deprotagonising to me. I think this is mostly because the world it describes has been wrecked so very, very thoroughly: all the highly advanced evil races who once kept humans as slaves and test subjects are dead, and the inhuman creatures who remain are largely of the 'mindless blob monster' variety. If a group of PCs ever managed to scrape together a decent-sized army and a sufficient quantity of salvaged Space Alien technology, they'd be a match for anything in the setting - except the Space Aliens themselves, I guess, but if they'd had any interest in conquering Carcosa they'd have done it millennia ago. Even many of the Great Old Ones, judging by the stats provided, are essentially paper tigers, hardly worth all the trouble necessary to summon or bind them: if some fruitcake summons, say, the Fetor of the Depths, then a formation of 100 archers will be able to kill it in a single volley as long as they have the sense to stay out of range of its stink attack. (A mere forty would suffice to kill the Foul Putrescence, which rather makes me wonder why anyone would bother going through all the rigmarole and sacrifices necessary to summon and bind the thing: anyone with that kind of resources would be better off just building themselves an army.) I'd never describe Carcosa as 'hopeful' or 'optimistic', and the default assumption is clearly that PCs will wander around for a bit, witness various strange and horrible things in the course of their travels through their ruined world, and then die at the hands of some robot, monster, or band of savages: if anyone ever used the rules provided - which I really hope they don't, because rolling dice to find out which dice to roll is just madness - then such doom is more-or-less guaranteed, as the extremely high randomness means that sooner or later each PC is likely to get splattered pretty much whatever they do. But while the setting is bleak, it's certainly not hopeless; and if one did want to run a 'from the ashes' style campaign in which the PCs unite the warring tribes of Carcosan humanity and exterminate all the stupid blob-monsters, there's not a whole lot in the setting as written to stop them. And because the cruelty and degradation of the Carcosans is clearly a response to their horrible situation, rather than just because they're all deeply horrible people for no adequately-explained reason (as in, say, some of Rafael Chandler's work), it's possible to believe that, one day, all this squalor and savagery could be left behind. Maybe your PCs will be the ones who help their species to turn the corner...

Realistically, I'm never going to run a game set in McKinney's Carcosa. Even if I did, I don't think that the interminable hex descriptions which make up no less than one hundred pages of the book would be all that much use to me: there are a few gems in there, but there's also a great deal which was clearly assembled via random tables, and it shows. But there are enough evocative fragments strewn through the book for me to feel that it was worth the princely sum of £6.71 which I paid to get the pdf version, and some of this stuff - the mummified sorcerers of the radioactive deserts, for example, or the general set-up of a ruined city inhabited by feral tribes of bizarrely-coloured humans, genetically colour-coded so that their ancient snake-man masters could tell at a glance who would be suitable for sacrifice in which rituals - is definitely going to turn up in one of my games at some point.

Probably not in Against the Wicked City, though.
Posted by Joseph Manola at 16:24