Monsters from Central Asian Mythology 7: Storm-Worms of the Cold Desert

This isn't really mythology, as such: many Mongolians sincerely believe in the existence of large, red, burrowing worms which live beneath the Gobi Desert. When they surface they are best left alone, because they have not one but two formidable natural defence mechanisms: not only can they spray a stream of highly acidic, poisonous fluid from their mouths, but their bodies also carry a powerful electrical charge, powerful enough to instantly kill anyone who touches one. None of the expeditions which have gone in search of the Mongolian Death Worm have ever found one, and I think it's safe to say that it probably doesn't really exist, at least in the spectacular form described by local folklore. It does make for good RPG monster fodder, though.

In its 'authentic' form, the Death Worm isn't really proactive enough to be useful. At best it's a kind of trap encounter: go too near the horrible worm and get your face melted off. The obvious route to take would be to imitate Dune, and make them into enormous mega-monsters; but then you're just doing a Dune pastiche, and any connection to Central Asia has rather been left behind. But maybe there's space for something viable somewhere inbetween...?

So: out in the cold deserts on the edge of the steppes, where the sand dunes glisten with frost by night, the wild Storm-Worms dwell. They are huge, solitary beasts, three feet wide and almost twenty feet long when fully grown, and they spend most of their lives burrowing far beneath the surface, deep in the guts of the earth: but in the brief rainy season, when the storms come sweeping over the desert and the rains pour down onto the sands, the Storm-Worms come surging to the surface. Churning through the soaking desert, they crash and writhe, their enormous bodies crackling with electricity as they sport in the brief rain; human and animal alike know to avoid them, as the worms can sense movement through the vibrations in the sand, and will direct withering sprays of acidic spittle at anything that gets too close. For those few hardy souls who risk travelling through the cold desert during storm season, the greatest danger is of a worm surfacing directly below you, as the creature will lash out in a panic with both its acidic spray and its electrified body at anything nearby: the native inhabitants of the region know how to spot the distinctive swelling of the sands which precedes their appearance, and know that seeing it is a warning to start riding away as fast as you possibly can.

Very occasionally, however, some of the nomads of the cold desert will deliberately seek out the Storm-Worms when the rainclouds come. Wearing thick suits of insulating felt, they will spur their horses as close to a worm as they dare while it revels in the rain, before throwing lassos around its neck; they then wheel their horses and pull away in different directions, so that the lines pull taut and the worm is pinned down right in the middle, unable to turn its head and spit acid at its captors. They then drag it back into a pre-prepared enclosure at some distance from the encampment of their clan, where one man, the bravest and most skillful of all, must then run up behind it on foot and tie a thick felt blanket around the worm's heaving body, knowing that a single touch of his skin against its electrified flesh could easily mean instant death. A saddle is then strapped on over the blanket; and when the beast is needed, a rider leaps astride it to steer the worm by means of ropes and goads. The Storm-Worms are too unintelligent to train, and all their riders can really do is point them in the desired direction and aim their heads at people whom they would like to suffer an agonising acid-based death; but even this is enough to make them a valuable asset in times of war, and cold desert clans who fear being attacked by larger or stronger groups will sometimes try to obtain a Storm-Worm or two in the hope of evening the odds...


Anyone touching a Storm-Worm, or hitting one with a natural attack or metal weapon in melee, will take 1d8 electricity damage unless they are completely insulated. Their electrical charge is biologically generated, and dissipates shortly after death. Their digestive systems contain very large quantities of powerfully acidic toxic fluid, which can be harvested from their corpses after death, although this is very dangerous work: anyone who doesn't know exactly what they're doing is likely to get their hands melted off in the process! 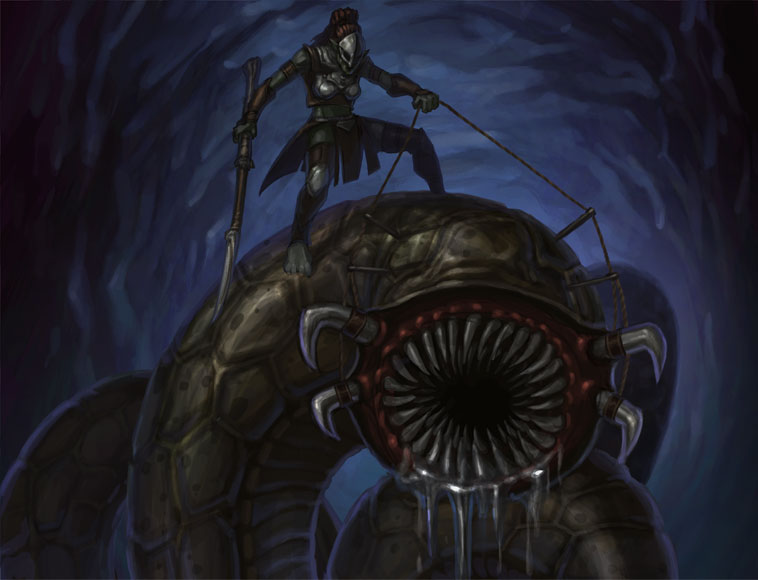