Denizens of the Wicked City 10: Clockwork beasts (AKA 'My new character will be DOCTOR CLOCKTOPUS!')

Not all of the Brass Folk are built in humanoid shape, although most are. But sometimes someone installs a Brass Man brain in a different body: the body of a Bronze Horse, for example, or the body of a Mechanical Messenger Monkey, creating a clockwork robot with human-level intelligence housed inside a non-human body. Even weirder custom jobs are possible: mechanical dogs, mechanical octopi, mechanical insects... whatever you can tinker up, really. The more conservative Brass Folk disapprove of such experimentation, insisting that the Cogwheel Sage gave them human shapes for a reason, and that each new generation should imitate her prototypes as closely as possible; but many others, especially those whose association with the Steel Aspirants has given them a rather freewheeling approach to radical body modification, take a more liberal attitude. If a given Brass Man or Woman decides they wants their 'child' to be a giant mechanical frog, what business is that of anyone else?

So here are the rules for playing them.

All Clockwork Beasts have the following traits: 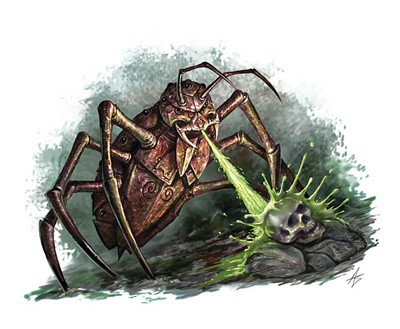 Clockwork octopi have the following additional traits:
Posted by Joseph Manola at 15:39