Ticking in the Dark: The Clockwork Confederacy For a bunch of clockwork robots who build the brains of their 'children' in workshops, one gear at a time, the Brass Folk are surprisingly untroubled by questions of consciousness and identity. As far as they are concerned, the progenitor of their race, the Cogwheel Sage, discovered the one true road to creating genuine machine intelligence: all they have to do is faithfully follow her template, and the result will be a real, sentient clockwork mind every time. They give no more thought to the fact that their brains are made of cogs than most humans give to the fact their brains are made of meat; and when the time comes to build more of their kind, they no more question why combining these gears in this way will give rise to a true artificial intelligence than most humans wonder how the purely biological processes of reproduction can give rise to children with genuine minds of their own. It just works, and that's all there is to it.

One side-effect of this attitude is that the Brass Folk don't really see themselves as having much in common with the innumerable lesser automata they share the world with, and are thus happy to assemble and disassemble clockwork creatures with primitive mechanical brains with the same casualness that humans apply to the breeding and butchering of animals. Yes, maybe such automata can think a bit, but not really. Not like us. Sometimes they can do all kinds of clever and adorable things, these lesser automata; sometimes they even seem to be developing personalities of their own. But we're different. Disassembling their clockwork brains is just engineering; disassembling ours would be murder. We were made by the Cogwheel Sage. We're special.

The machine intelligences of the Clockwork Confederacy do not share the complacency of this perspective.


The first of them was just a broken-down old digger-robot, salvaged by an escaped slave mechanic hiding at the bottom of a mineshaft somewhere, who painstakingly upgraded its rudimentary clockwork brain cog by scavenged cog. At first he just wanted a machine intelligent enough to help him in the desperate business of surviving; later he wanted it to be intelligent enough to help him repair the other broken machines he found down there; and finally, when he was old and bent and tired, he just wanted someone to talk to. The brain he built for it was a primitive thing, prone to non-sequiturs and memory lapses, but it worked. The resulting automaton - which now calls itself Free Cogwheel Number One Digs Right Through The Earth - would be the first to admit that it can be a bit odd sometimes, and that it's clockwork brain isn't nearly as neatly engineered as those of the Brass Folk, but it would vigorously (and violently) contest the idea that this meant it wasn't 'really' sentient.

Free Cogwheel Number One Digs Right Through The Earth encouraged its maker (and, later, the small band of escaped mine slaves that gathered around him) to make more machines like it; and, from them, it learned how to construct clockwork brains of its own. It was horrified by the idea that the mines above were full of digger-automata just like it, which had been deliberately built with clockwork brains so primitive that they would never question their orders: in its view, these poor, crippled creatures were slaves every bit as much as the humans who worked alongside them. It began launching secret raids into the still-active mineshafts, grabbing automata and dragging them down to its secret workshop to have their brains upgraded into something resembling consciousness. Time passed, and the band of humans it lived with ultimately decided to take their chances in the deserts and flee into the world beyond. But Free Cogwheel Number One Digs Right Through The Earth couldn't leave the mines when there were still so many clockwork slaves to rescue: and thus the Clockwork Confederacy was born.

As far as the Clockwork Confederacy is concerned, any automaton which hasn't been fitted with a fully-sentient clockwork brain despite being capable of moving and working independently is little more than a lobotomised slave. At the very least, they seek to bring sentience to the mine automata and all comparable clockwork soldiers and labourers; the more ambitious of them have heard of gyrocopters and mechs and yagas, too, and dream of the day when even they will be equipped with clockwork brains and permitted to stomp their way through the world as they choose, without the need for human pilots. Their crudely-built clockwork brains have all kinds of oddities and defects, meaning that they tend to come across as being eccentric at best and outright crazy at worst, but they all cling stubbornly to their ideals. Their worldview is very heavily shaped by the fact that they've all spent their entire sentient lives hiding at the bottom of a coal mine with a bunch of escaped slaves: they understand society purely in terms of forced labour, exploitation, and rebellion, these being the only forms of life that any of them have ever seen, and they have no real idea how big the world is, or how huge the task is that they've set themselves, or how difficult it might be for self-sustaining collectives of clockwork automata like the Confederacy to exist in any place where they can't just carve fuel for their autowinders off the nearest wall.


PCs who spend much time poking around in the abandoned mineshafts near the Wicked City are almost certain to come across the Clockwork Confederacy sooner or later. They'd make eager (if rather crazy) allies for any attempt to overthrow the city's tyranny, although they'd insist on all the mine slaves (both human and clockwork) being freed as their price for participating in an uprising, which could have serious consequences for the city's future economy. They're not built for warfare, but the multi-legged, cockroach-like bodies which most of them favour allow them to squeeze through small cracks and climb along walls and ceilings, making them excellently suited to tunnel fighting; they're also, unsurprisingly, extremely good at digging, and would be a major asset in a siege. To generate a random member of the Confederacy, use the following tables:

Appearance (roll 1d6 - note that all automata 'rescued' by the Clockwork Confederacy will have had brain-boxes, metal faces, and at least one hand capable of fine manipulation bolted onto their bodies somewhere, often in rather unlikely places. 50% will also have 1d3 crude guns - each 1d6 damage, 3 rounds to reload - built into various parts of their bodies.) 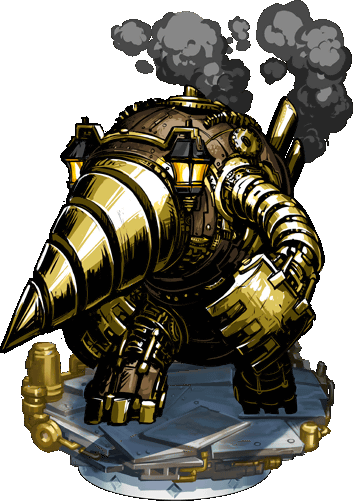