This came up in response to my recent post on mapping generic OSR-land. When I drew the map, I covered it with cults until I started running out of map-space to put them in. Gus L's comment, on the associated G+ thread? 'Needs more cults.'

Why do we love cults and cultists so much? There are at least ten really obvious reasons:
Cultists, in other words, are easy to build D&D adventures around... maybe too easy. They're a narrative shortcut, a way to explain why the otherwise extremely unlikely combination of elements which constitute a generic D&D scenario should exist in the same place at the same time. But the shortcut only works if you assume the existence of a very odd bunch of people, namely the kind of people willing to behave like cultists in D&D adventures. Why, exactly, is Patricia the Priestess willing to sit in a dark room for twenty-four hours a day, on the off-chance some intruders wander in for her to stab with a sacrificial dagger? Because she's a cultist. OK. But why is she a cultist? What can possibly have happened to her to make her decide that signing her soul away to Skull-Fang the Planet-Fucker would be a good idea?

A lot of adventures gloss over this stuff, and clearly expect the PCs to find it unremarkable that some random cult leader was able to round up ten, or twenty, or a hundred people from the surrounding community who were so impressionable or crazy or desperate that they were willing to act as his personal cultist army. And I'd buy that if the cult activities were a bit less extreme: if all that most of the cultists were expected to do was wear big robes, chant creepy prayers, and maybe intimidate people who persisted in asking awkward questions about exactly what happens at the old standing stones on the night of the new moon. But most D&D cults are hardcore, and expect their cultists to demonstrate fanatical loyalty even when their own lives and/or souls are on the line. Where is your average dark magician supposed to find dozens or hundreds of people like that?

(Lovecraft himself isn't very helpful on this topic, because - like many people in the late nineteenth and early twentieth centuries - he saw socially deviant behaviour like crime and cultishness as being basically genetic. If you have the wrong heritage, then you'll just naturally gravitate towards worshiping giant tentacle monsters. It's probably fairly obvious why that's a line of explanation I'm reluctant to make too much use of, though...)

I've often found myself thinking about this as I read D&D adventures, and Warhammer adventures and, perhaps above all, Call of Cthulhu adventures. Who are these people? Why do they do these things? Call of Cthulhu had a standard way of dodging this question, in the form of its concept of 'cultist-level insanity': Cthulhu Mythos cultists had Sanity scores of 0, indicating that their minds had been so shredded by exposure to supernatural forces that acting like cultists was now the only thing they were capable of. But that always struck me as a bit of a cop-out answer, especially as they often didn't seem all that mad in other respects: no delusional or irrational behaviour, just a rewrite of their life-goals to read 'summon Cthulhu at all costs'. 'They're all mind-controlled or possessed' is even more of a cop-out: at that point you're not really dealing with people, just with zombies who happen to still be technically alive. In fact, mind-controlled cultists come closer to the original zombie myths of Haiti than any modern-day undead shambler. If they're not mindless drones, though, then why do they do all this D&D cultist stuff? Brainwashing? Fear? Drugs? Desperation? Greed? Are they upholding an old family tradition? Do they think the ends justify the means? Do they have some kind of value-system so bizarre that they believe what they're doing is actually a good thing? Are they just hopelessly devoted to their leader, driven by the deluded conviction that if they just kill one more person, then their sexy, charismatic Dark Master will finally give them the attention and recognition they deserve? Whatever it is, it must be something pretty powerful, or they wouldn't be sitting in an underground temple someplace waiting for the PCs to break in and kill them all.

Regular readers of this blog will already have guessed where I'm going with this. Cultists who are cultists because they're cultists are narratively convenient, but they're also kinda boring: they can't be bribed or intimidated or reasoned with, so the only way to deal with them is through yet another commando raid on yet another evil temple. But if the cult leader has to rely on more mundane means to keep his followers in line, then the PCs can disrupt or exploit them: they can steal the drugs he has them hooked on, or engineer a situation that will shatter his illusion of omnipotence, or offer his desperate followers some kind of hope for the future that doesn't involve feeding people to demons.

I understand that sometimes the whole reason you're using cultists in your adventure is precisely because you want antagonists who are basically human zombies - foes who have organisation and intelligence and whatnot, but who will never say or think anything other than 'Die, infidel, in the name of the Planet-Fucker!' But if you're not, you can still get all the advantages listed above while still making them into actual people - with the added advantage of helping to differentiate each cult from the last one. A personality cult built around an charismatic leader and his adoring devotees is going to be very different from a conspiracy of ambitious, amoral individuals who worship demons as a get-rich-quick scheme, and is open to very different kinds of solutions, whereas yet another bunch of robe-wearing, dagger-waving lunatics is only going to be differentiated from the last lot by the exact kind of magic and monsters they have in their inevitable Evil Temple.

In my current Team Tsathogga game, the PCs basically are cult leaders, and it's been fascinating for me to watch the various schemes they use to impose and shore up their made-up religious authority. There's some good drama right there. Might as well use it, right? 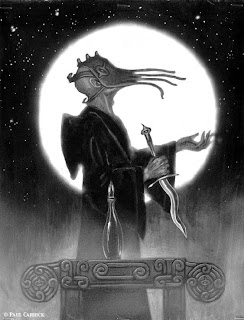