You've probably all seen those maps of Generic Fantasy Land. This one was made years ago;  more recently James Hutchings posted two similar ones over on his Teleleli blog. You might also have seen this post over on Throne of Salt,  which took a whole bunch of OSR settings (including mine!) and squished them all together into a single hexmap - which is also, incidentally, pretty much how I built the game setting for my current Team Tsathogga campaign.

Reading these two posts in close succession made me think about what the OSR-fantasy version of those maps would look like. The OSR, after all, has its distinctive preoccupations and areas of focus: a lot less Generic Fantasy Kingdoms, and a lot more crashed spaceships and mutant snakemen. We have our own fads and fashions - islands and whaling seems to be in this season - and one doesn't need to read very widely in the OSR blogosphere to start seeing the same motifs surfacing over and over again. (There seems to be no limit to our collective fixation with cults and cannibals, for a start.) So I idly opened Hexographer, and an hour later, I came up with this... 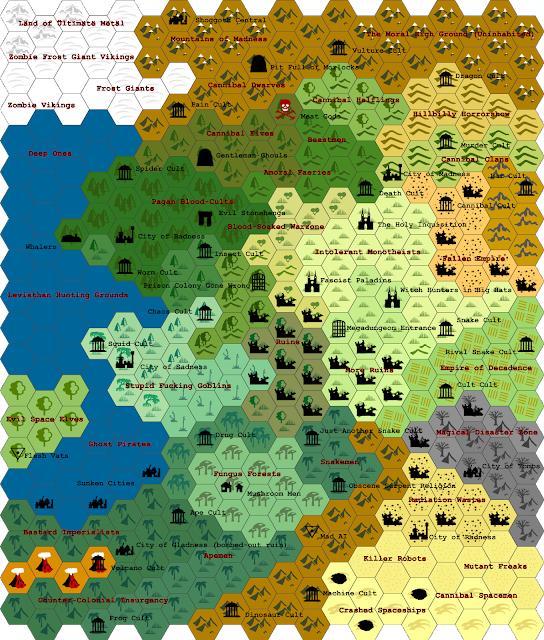