I'm back. So here's a review of another product I backed on kickstarter a while ago: the DCC adventure module Sky Ov Crimson Flame by Thorin Thompson, who writes the Owl Knight Publishing blog. I backed it because $5 for a 60-page adventure seemed a pretty good deal, and because I'd enjoyed Thorin Thompson's Shudder Mountain actual plays. I liked it, and I certainly feel I got my money's worth from it, but it prompted me to engage in yet more brooding over the role of horror in RPGs. So that's what this post is mostly going to be about. 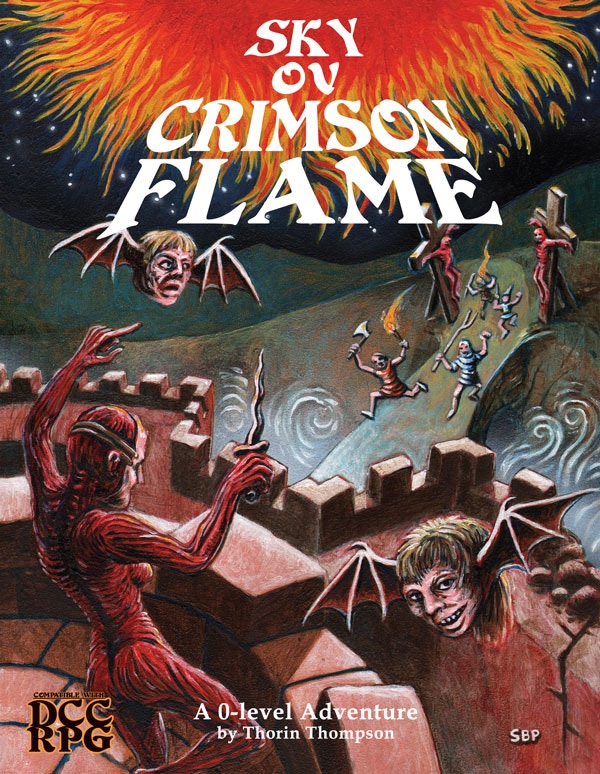 Sky Ov Crimson Flame is a DCC 0-level character funnel, plus a wilderness mini-campaign suitable for those characters who survive the carnage and graduate to 1st level. The initial pitch is very simple: the PCs are villagers, loads of people from their village (especially children) have been vanishing in the night, and a mysterious red star has risen which local legends associate with a nearby ruined keep, so the party heads off into the forest to see if the stolen villagers are being held captive within it. What's really going on is that a local girl went to the keep, found a magic dagger, got possessed by the spirit of the necromancer who created it, and started kidnapping other villagers, using the dagger's power to magically brainwash them into a cult with whose aid she hoped to summon the necromancer's spirit back to the world. PCs turn up, fight the cult and its monstrous creations, and then have to try to disrupt the ritual before the necromancer can return. Pretty standard D&D stuff, right?

What sets this adventure apart from many others with similar-ish plots is the sheer level of violence and body horror involved. The dagger doesn't brainwash people through some kind of generic magic aura: it brainwashes them by being used to flay them alive. (The girl who found it started the ball rolling by using it to flay herself.) The cultists are all flayed men, kept impossibly alive in their horrific situation by the dagger's magic, and wearing masks made from severed human faces. Some villagers were able to resist the brainwashing, and refused to join the cult... but they'd still been fucking flayed, so now they wander around the woods, mad with pain and horror, attacking people at random and begging for death. The corpses of crucified villagers are nailed to the walls of the keep: as the party approach their faces tear vertically in half, forming wings of flesh which then flap upwards carrying their skulls and spinal columns with them, creating 'head bats' which try to impale people with their spines. Some of the kidnapped children have been beheaded, and wing-like flaps of skin have been sewn to their severed heads to turn them into 'cherub head-bats' which fly around biting people. The rest of the children have been merged together into a giant floating ball of faces, limbs, and flesh, the 'cherub fusion'. The keep is roamed by a heap of flayed-off flesh which sneaks up on people and then engulfs them, swallowing them up inside itself and secreting acidic fluids until they're melted away into slurry. There's a 'shambling flesh mass' which grabs people with its entrails. The big ritual involves a whole bunch of impaled corpses and lots and lots and lots of blood. And those are just some of the highlights.

It's not quite clear to me what one is supposed to do with horror and violence on this scale. Are the PCs - who, remember, are just normal 0-level characters, not hardened adventurers - supposed to react naturalistically to being attacked by their flayed neighbours wearing the severed faces of their closest friends as masks, or to being bitten by the flying, decapitated head of their own eight-year-old niece? Surely not: the adventure clearly expects the response to seeing all these splatter-monsters to be 'roll for initiative', rather than 'suffer a total nervous breakdown' or 'run screaming into the night'. The adventure uses horror, but it's not really about horror: the text doesn't dwell upon the horrific nature of the situations it describes, and presents being assaulted by your own friends and family, flayed alive and begging for death as they claw at your flesh with bloody talons of exposed bone, as though it was functionally equivalent to any other bout of D&D zombie-whacking. The art, likewise, plays down the awfulness of the scenes it depicts: the emphasis is on semi-comic grotesquerie, rather than Junji Ito style visual shocks. But if it's not about the horrificness of horror, then what's it there for?

Part of the answer is probably implicit in the module's nature as a character funnel. 0-level funnels, by their very nature, have something of a slasher-movie feel to them; you create this whole bunch of largely-interchangeable characters, with only the most minor of distinguishing characteristics, and then get to see them slaughtered wholesale as they stumble through situations for which they are desperately ill-prepared. Finding out how your PCs are going to die is half the fun; and, just like a slasher movie, watching them get killed in some particularly grotesque or improbable fashion can be just as entertaining as watching them succeed against the odds. In most funnels, the PCs are the squishy bits in a hard and threatening world; but Sky ov Crimson Flame projects this same air of gory farce out onto the entire adventure, presenting a whole setting in which the main thing that human bodies do is come messily apart. Run in a different spirit, this could be a truly nightmarish horror adventure - but it would be so nightmarish that most groups probably wouldn't enjoy it very much, so knockabout splatter-horror-comedy is probably much more likely to lead to people actually having fun. And because the adventure doesn't really make use of the horribleness of its horror content, you could dial down the awfulness substantially if you wanted to: replace the flayed men with regular zombies, the severed heads with flying skulls, and so on. Just go with what you think your group would actually enjoy.

Anyway - splatter aside, this is a pretty solid adventure. It's a bit too they-attack-on-sight-and-fight-to-the-death for me, but the keep is excellently suited to killing off large numbers of 0-level characters in memorably horrible ways, which is surely the main thing that a character funnel location needs to accomplish. My favourite part of the module is actually the bonus material, 'Blights ov the Eastern Forest', which presents the surrounding area in a format suitable for low-level sandbox play: an awful blighted woodland full of weird, twisted creatures, dotted with sad, haunted remnants of the chivalric kingdom which once ruled these lands. (In keeping with the module's overall themes, though, even they seem to have been kinda awful.) It's very imaginative, atmospheric stuff - accursed ghosts, creepy monsters, rivers of blood - and even though the module assumes that the main way that the PCs will interact with all this stuff is by hacking it to death, some very minor rewrites would turn it into something much more amenable to less combat-centred play than the keep in the main adventure. Plus, you get to meet the Gummi Bears! (Admittedly, they're reimagined as ancient alien slime monsters, but what did you expect?)

If the pdf still cost $5, I would recommend this without hesitation; but as it costs $10, I think you'd have to want both a splatter-filled horror-dungeon and a weird creepy wood full of ghosts and mutants in order to justify the cost. I'm currently hoarding my income to pay my son's crippling nursery fees, though, so I may have a rather warped perspective.

You can get it on drivethru here.
Posted by Joseph Manola at 15:32 2 comments: