The Hexcrawl of Hexcrawls: an Epic (for Trojan Points) 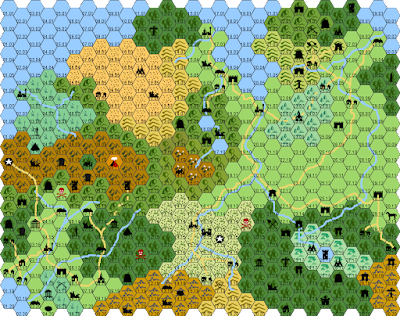 Back in March, Trojan Points set me a challenge in the comments to this post: to put all the good encounters from several different Pathfinder adventure paths onto a single, nation-sized hexmap. 'Can you distil 4000 pages to 20 something?', he asked. I replied:


I've just opened up Hexographer and played around with combining all my hexcrawls into a single map, and then adding the necessary geography for my three non-hexcrawl condensations, and it *almost* works. All it's missing is some kind of big central power in the middle of the map, to be the nation which is currently occupying Westcrown, notionally in charge of the Sundered Kingdoms, able to task the PCs with clearing the forests in Kingmaker, and so on. (Neither Magnimar nor Korvosa really fits the bill.) Condensing one more AP should do the trick.

Last month I wrote a condensation of Iron Gods, and after a bit of reflection I concluded that the Technic League made as good a 'central power' as any other. So I plugged the geography from Iron Gods into my map from March, copy-pasted all the text from my condensations and hexcrawls into a single document, rekeyed them to the new, combined map, and modified them to remove all the implicit and explicit time limits, in order to make them friendlier to hexcrawl-style play. I can't claim to have distilled 4000 pages into 20, but I did get 3500 pages and a 70-hour computer game into 47.

It's a very rough and ready job. The Great Machine material has been rescaled from 10-mile hexes to 6-mile hexes, meaning that everything is improbably tiny and close together. The areas that were written as hexcrawls (the south-western, north-eastern, and south-eastern corners of the map) have things going on in almost every hex, whereas the other areas have large blank spaces. The areas that weren't written as hexcrawls usually have enormously greater amounts of stuff going on in each location: the worst offender is the city of Westcrown, which has an entire adventure path's worth of content crammed into a single hex. If I was doing this from the ground up I'd have extensively rewritten all the material to sprawl more, so as to cover the territory more evenly, while also reformatting the whole thing and adding hyperlinks to make it much more user-friendly - but that sounds like a lot of work. Maybe Trojan Points would like to do it.

Anyway. I've done it now. If you've ever wanted to randomly wander between a whole bunch of different adventure paths, then this is your chance. You can download the damn thing here:


Rise of the Curse of the Council of the Shadow of the Cult of the Crimson Runelords of the Sundered Thrones of the God-Thieves of the Great Kingmaker’s Machine-Kingdoms: A Hexcrawl

From the Diaries of Mr Alfred Tennyson, 1848

This blog's been a bit quiet because the Team Tsathogga campaign is on hold for the summer, and I'm trying to finish a book on poetry and insanity in the early nineteenth century, which is currently absorbing most of my mental energy.

Occasionally, however, I chance across something that looks potentially gameable.


These are all real extracts from Tennyson’s journal, written during a trip to Cornwall he made in the summer of 1848. Maybe it’s just his choice of words and imagery, but I can’t help the feeling that there’s some kind of Call of Cthulhu adventure going on in the background. Something to do with caves and slimes, sea-birds and shipwrecks, weird fossils and ruined castles, Arthurian relics and isolated seaside towns.

I wish I knew who the ‘Ethiopian serenaders’ were on July 19th.