You know what makes for good drama? Unequal power relations!
You know what makes for even better drama? Power relations that are not what they appear to be!
Next time you introduce two NPCs, make clear that one of them is higher status than the other. This can be obvious (noble and servant, employer and employee, lord and villein, officer and soldier, teacher and student) or more subtle (two members of the same guild, community, regiment, or family, one of whom is just slightly senior to the other), but it's something that they're both acutely aware of, and it inflects every interaction between the two of them.
Then roll 1d20 on this table to find out what the relationship between them really is! 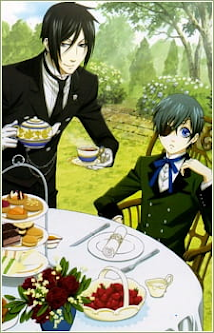 Desert Monsters from the City of Spires

A few monsters who have turned up in my current campaign. I think my PCs have figured all these guys out well enough for me to safely list them here.

Smoke giants are artificial guardians created by a long-fallen civilisation. In their dormant state, they just look like a thick covering of soot, coating everything in the room they guard. When they are disturbed, however, the soot flies up into the air and rapidly coheres into an ogre-sized humanoid monster, jet-black from head to foot. The giant furiously attacks anything that enters its protected area. If reduced to less than half HP, or if the trespassers depart, it explodes apart into a cloud of choking black smoke, which gradually settles to the ground as thick black soot. In smoke/soot form it recovers 1 HP per round until fully healed, at which point it will cohere back into humanoid form if the trespassers are still present. If reduced to 0 HP it explodes into smoke and does not recohere.

If a dormant smoke giant can be collected into a container while in soot form without triggering it, then the resulting container can be used as a missile weapon: the moment it is opened, the giant will explode out of it to attack anyone nearby. Smoke giants are sometimes found still lying dormant inside their original storage crates.

(Once my PCs worked these guys out, they dealt with them by building an improvised suction pump attached to a hose, which they used to suck up the soot a little at a time from outside the giant's trigger radius. Then they mixed the soot with clay and baked it into bricks, effectively imprisoning the giant. The smoke giant's attempts to reform itself from inside the bricks makes them vibrate violently whenever anyone approaches, allowing them to function as an intruder alarm system.) 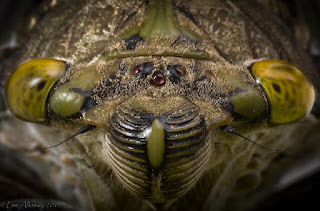 These awful famine-spirits look like shadowy humanoid locusts. They are only semi-corporeal and take half damage from non-magical attacks. Anyone struck by their claws is filled with terrible weakness, as though they hadn't eaten for days, and loses 1d6 strength - this strength returns at the rate of one point for each decent meal they eat. Anyone falling to Strength 0 is reduced to an emaciated corpse, apparently the victim of months of starvation.

Locust spirits are only semi-intelligent, and can usually be found as servitors to more powerful spirits or dark magicians. 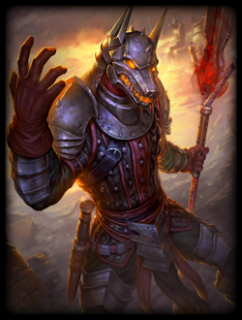 In jackal or warrior form, they have long, lashing razor-sharp tongues, with which they can attempt to open the arteries of one opponent per round in melee combat. Unless their target is wearing armour on their neck, wrists, and thighs, they must save each round or else be cut, bleeding out for 1d6 damage per round. Spending a full round bandaging the wound allows for a new save to stop the damage. Any healing magic stops the bleeding instantly.

Jackal Knights register as magical to Detect Magic, and casting Dispel Magic on a Jackal Knight in dust-devil form will force it to resume one of its corporeal forms. 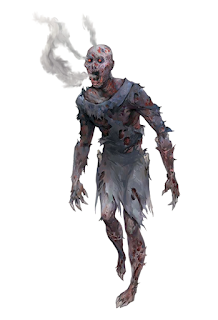 This one was adapted from a Pathfinder monster. Created from the dehydrated corpses of unfortunates who perished in the wastes, these zombies resemble dried-out desert mummies aside from the candle-like flames that flicker inside their hollow eye-sockets. By day they slumber beneath the desert sands, quiescent unless disturbed, but by night they wander the in search of prey, their eye-flames visible from afar off in the darkness of the desert night. If they hit anyone in melee, their target must save or be grabbed and pulled in close enough for the zombie to exhale its dessicating breath all over its victim, causing an additional 1d8 damage in spontaneous dehydration.

The flames in their eye-sockets serve as their eyes: immersion in sand cannot extinguish them, but immersion in water can. A zombie whose eye-flames are extinguished is effectively blind, and will simply wander randomly. If it is still animate by the following dawn, the flames in its eye-sockets reignite the moment the sun comes over the horizon.