Remember the Buryat version of the King Gesar epic? In it, all kinds of evil beasts are sent into the world by the evil spirits born from the corpse of the dead sky-monster, Atai Ulaan. The first ones are rats with brass muzzles. The next ones are ravens with iron beaks and claws:


From the very beginning of the east,
In an ugly land,
In a meagre country,
In a place withered and dried by grief,
By three marshy rivers,
In a place of slippery slopes,
A dwelling place of demons and evil spirits,
A scorching hot land,
A dark and sunless country,
A place dry and devoid of plants,
Two ravens came flying,
Cawing and croaking.
They hovered over the face of Bukhe Beligte,
They planned to blind him by pecking out his eyes.
The baby Bukhe Beligte lay in the cradle gathering his strength,
He quickly grabbed the wings of the two black ravens.
“What kinds of devils are you,
Flying about the wide world,
With beaks and talons made of iron?!”

If one wanted to go full-on science fantasy with this, it would be easy to imagine Atai Ulaan as some kind of immense bio-mechanical construct - a space station, an aerial warbase, whatever - which, after it crashes, continues to churn out cyborg monsters and unleash them onto the surrounding world. (Maybe its malfunctioning programming leads it to grab local lifeforms, like giant rats or ravens, and replace random chunks of their bodies with cybernetic prosthetics.) Given that ATWC doesn't go quite that far, though, I'm going to keep them, like the Brass-Snouts, as weird monsters of uncertain origin, possibly created by some long vanished civilization out on the steppes. They're bigger than normal ravens, with a six-foot wingspan, and they weigh as much as a small child; their beaks and claws are made from black iron, and are as sharp as knives. Like all ravens they are primarily scavengers, but their size and their fearsome natural weaponry makes them much braver than their mundane cousins, and a flock of ironclaw ravens will not willingly yield up their carrion even to a pack of wolves. Their talons can slice flesh to ribbons, and their beaks can stab a man to the heart. 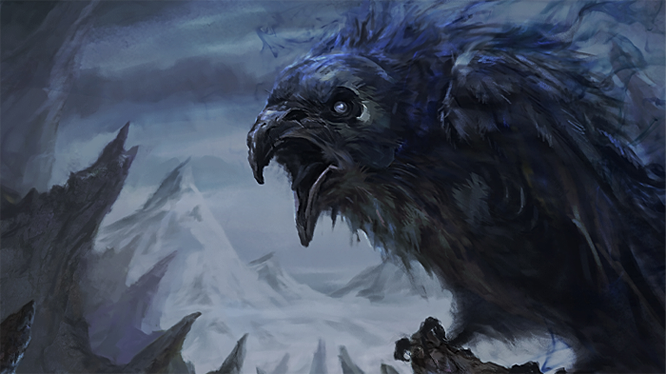 Well: if that were all, they'd just be another hazard of the steppes and the taiga, like the wolves and the tigers and the bears. But the ironclaws are clever: not quite in the same way as humans are clever, or even in the way that the Wise Folk are, but with a weird, cold, avian intelligence all of their own. They communicate with one another across immense distances, and when they spot an opportunity to create a true carrion feast - a drover's bridge that could be sabotaged, for example, sending a whole herd of cattle tumbling to their deaths where the ironclaws can devour them, or a warning sign that can be stolen, leading horses and riders into dangers from which they might never escape - then entire flocks of them will descend in great flapping clouds, slicing through ropes, pulling away markers, and even killing witnesses if necessary. The worst of them make common cause with outcast bands of robbers, outlaws, and scavengers, in which the ravens provide the aerial scouting and the humans provide the opposable thumbs. In such pairings, it is not at all clear who has domesticated who.

Ironclaw meat is rank and foul-tasting, but the ravens are widely hunted: their talons make excellent knives and bladed tools, and their beaks need only be mounted onto handles to become cruelly effective punch-daggers. Many a nomad tribe, with no access to iron ore or forges, relies upon the hunting of ironclaws almost exclusively to provide them with the metal implements they need. The price for such hunting is high, however; the ironclaws mark such tribes out as their enemies, and their members exist in a state of continual low-level hostilities with the vicious birds, never daring to let their children out of their sight for fear some knife-clawed bird will descend upon them and mutilate them out of revenge before flying away.

Ironclaw ravens have an instinctive affection for members of the Unkindness, and will happily become their henchmen if offered the chance.

Ironclaw ravens have an instinctive knack for slicing open arteries and stabbing vital organs. If one rolls a 6 for damage, then it has hit an artery or impaled something vital, inflicting an extra 1d6 damage on the target.
Posted by Joseph Manola at 14:45