The sable gold of the taiga: adventures in the early modern fur trade

To everyone except the indigenous peoples who actually lived there, early modern Siberia was about as uninviting as places got: a vast and pathless wilderness of bogs, forests, and tundra which stretched away endlessly to the east of the Ural mountains. For the Russians of the period, the nightmarish months-long journey over the Urals and into the taiga, replete with opportunities for being mauled by bears, mutilated by frostbite, or wandering the forests in circles until you starved to death, was made worthwhile by just one thing - a small, furry thing, about two feet long. The sable.

Being smooth, lustrous, and absurdly difficult to get hold of, high-quality Siberian sable furs commanded extremely high prices among the nobility of Persia, China, and Europe. In the Middle Ages, being unable to access Siberia themselves, the Russians had to trade for them with Komi middlemen in the Kingdom of Perm; but the last prince of Perm was deposed by the Russians in 1505, the Russian conquest of the Sibir Khanate from 1580-98 removed the last rival power in the region, and in 1597 the Russian explorer Artemy Babinov charted a new path over the Ural Mountains that allowed much more direct access to Siberia. Over the years that followed, Russian labourers hacked their way through the taiga, gradually changing the Babinov Route from a line on a map into a physical reality on the ground: a road, dotted with Russian forts, along which Russian hunters and fur traders could travel directly into the sable-rich Siberian forests of the east.

The seventeenth-century Siberian fur trade strikes me as being extremely fruitful terrain for gaming, partly because of its many similarities with another setting which almost all players are already going to be familiar with: the American Old West. In each case you have a rising power (Russia / America) pushing beyond its traditional borders to the (east / west) and into new territory, in search of a highly valuable, highly portable luxury good (furs / gold). In each case, obtaining this resource is extremely hazardous: the terrain is hostile and borderline impassable in places, and new infrastructure (roads / railways) are required to open it up for economic exploitation. In each case, there's an indigenous population (native Siberian / native American) who are less than thrilled about all these weird white people turning up in their territories with their guns and their bibles and their interesting new infectious diseases, leading to the construction of a network of forts manned by highly mobile cavalry forces (Cossacks / US cavalry) who are capable of inflicting reprisals on any native groups that step out of line.


It's often been remarked that, in many ways, D&D really resembles a Western much more than it resembles medieval Europe. Small communities separated by vast wildernesses; dangerous landscapes roamed by large predators; high levels of tolerance for 'adventurers' and similar social misfits; central authority weak or distant, and probably represented only by the occasional Keep on the Borderlands: all this sounds a lot more like the Old West than, say, thirteenth-century France. In many ways, early modern Siberia (or a fantasy analogue thereof) provides a happy medium between the two. PCs can try their hand at fur trapping, or fur stealing, or hire on as guards to protect someone else's fur stash from raiders or opportunist thieves; they can get mixed up in the regular bouts of violence between the indigenous peoples and the Cossacks who are trying to extort valuable furs out of them at gunpoint; they can map out new paths through the taiga and sell them to the tsar for a fortune; they can get sentenced to convict labour building a road through some godforsaken forest somewhere and have to work out how to escape without getting eaten by bears. Just resist the temptation to replace either the Russians or the indigenous Siberians with non-human races and you should be fine.

The big difference between this and the Old West is the reduced sense of inevitability. The whole mythology of the Western is pervaded by an awareness that the Old West is only ever a transitional moment in history; at the end of the story the cowboy rides west, into the sunset, and in his wake come the railroads and the banks and the lawmen and the big mining companies, turning the mythic Frontier into just another chunk of America. Manifest Destiny marches on: the outlaws or the Apaches can win individual battles, but ultimately they cannot win the war. (I've never studied the actual history, so I've no idea to what extent this is just self-congratulatory fantasy masquerading as historical inevitability, but it's certainly how it's usually presented in the fiction.) But the situation in seventeenth-century Siberia was rather less one-sided: early modern Russia was a ramshackle autocracy rather than a modern industrial state, and its priority was to extract valuable resources from Siberia, not to settle and absorb it. If your PCs decide to ally with a local tribe and stand up to Russian pressure, then if they can make enough of a nuisance of themselves the Cossacks will probably just give up and ride a few hundred miles on in search of someone easier to intimidate. They're adventurers hoping to get rich quick (just like your PCs!), not ideologues out to Tame The Wilderness And Make It Safe For Civilization. One look at a Siberian bog would be enough to convince anyone that that was a terrible idea.


In ATWC, the fur trade is still in its earliest stages. The taiga is gradually being penetrated by strange men from the west, with big beards and big mustaches and really, really big guns. They come in search of furs, and they build forts and roads in lands where no-one has ever built anything more permanent than a yurt before. They make great quest-givers, great trading partners, and great enemies - if I ever did an ATWC monster manual, then 'hairy foreigners with guns' would definitely be one of the entries - but their roads are narrow, and the taiga is immense. For now, at least, they are a curiosity rather than an existential threat.

But they have big plans, and big maps, and they say that their day will come. 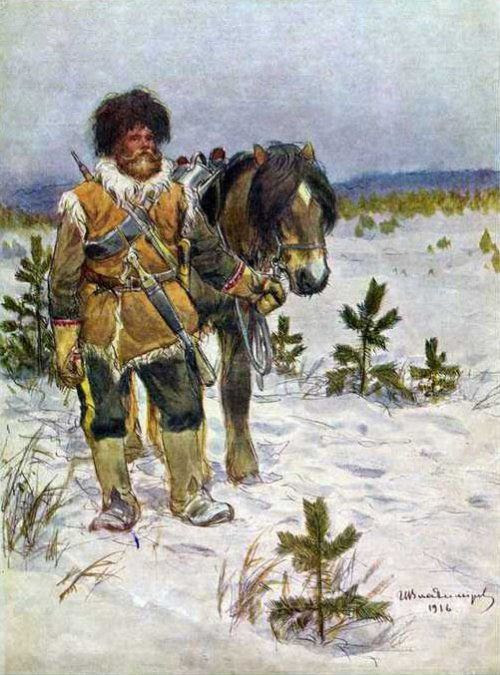