So, um, this is going to be one of my sillier classes. Derek Holland asked me to write a B/X MacGyver class. I've never seen any MacGyver, but I knew the general idea, and Derek gave me a brief: an engineer class which tinkered its way out of situations using devices cobbled together on the spot, rather than relying on a portfolio of prior inventions. So here it is.

Note that, by its very nature, this class requires the GM to be very lenient when it comes to accepting what can be built out of what. The question of exactly how the PC turns a heap of bones and leaves into a fully functional hot air balloon simply by hammering at them for a few minutes is really best not looked into too closely...

Also note that, with the exception of their stronghold (see below), all the devices built by the Tinker have a strictly limited lifespan. When it comes to building things that actually last for more than a few hours, their ability is no greater than that of any other talented engineer of the appropriate tech level. 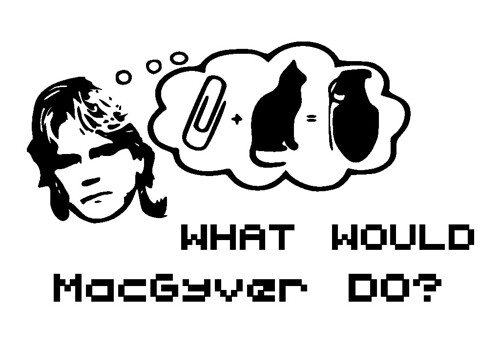 Weapons and armour: As per thief, but you are also proficient with any improvised weapons or armour you create yourself (see below).

XP per level: As magic-user.

Mechanical Aptitude: You have the same ability to pick locks and find or remove traps as a thief of equal level.

Scavenger: You can't build your devices without a suitable heap of bits and pieces - fragments of metal, scraps of cloth, bits of wood and bone, whatever - to build them out of. Luckily, you have an uncanny knack for finding random bits of junk wherever you go. By searching for 10 minutes and spending 1 point of inspiration, you can always find enough stuff to build the thing you want, unless it would be obviously and entirely impossible for you to do so. 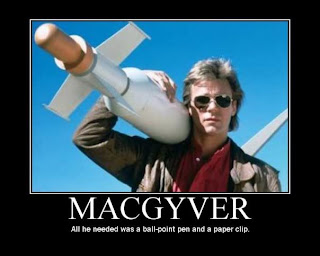 Improvise Armour: You can cobble together any old random junk into weirdly effective improvised armour. 1 inspiration and 1 minute's work grants a +1 AC bonus to you or one other person; this may be increased to any extent, but the cost in time and inspiration doubles for each extra point of AC. (So granting someone +3 AC would cost 4 inspiration and take 4 minutes.) The resulting armour will fall apart after a number of hours equal to your level.

Improvise Tools: You may spend 1 inspiration and 5 minutes to cobble together nearby junk into a crude but effective version of any normal tool: a lockpick, a snorkel, a water clock, and so on. (At the GM's option, this may also allow you to cobble together things like magnets and small electrical generators.) If your toolkit is taken away from you, you can use this ability to tinker up replacement tools out of sticks and stones. The resulting tools will function for 10 minutes of use per level before falling apart.

Improvise Chemicals: You may spend 10 minutes to convert some totally innocuous-looking nearby substances into either slippery stuff, a phosphorescent fluid, a powerful explosive, a powerful corrosive, or a poisonous gas. You also create a fragile container to store it, which will break if thrown, trodden on, etc. Effects are as follows:

The chemicals you create will decay and become inert after 1 hour per level.

Build Artillery: You may spend 5 inspiration and 10 minutes to turn a random heap of junk into a crude but effective man-portable catapault, ballista, cannon, mortar, or similar device. Its target must save or take 2d6 damage: you may increase its damage by spending 5 inspiration for each additional 1d6, so a cannon which inflicts 4d6 damage costs 15 inspiration, and so on. You can also upgrade it to an area effect by spending additional inspiration equal to the desired blast radius in feet. The resulting weapon can be fired once per level before it breaks; it will also fall apart after a maximum of 1 hour per level if it has not already done so. If your artillery is used by anyone other than you, each shot taken counts as two shots towards its maximum limit.

By spending an extra 5 inspiration, you may give your artillery an automated firing mechanism, which will trigger either after a certain length of time (e.g. 'ten minutes after I set the timer') or when a connected tripwire or pressure plate is triggered. Once the automated artillery is triggered, it will fire once per round at whatever it's currently pointing at until it falls apart.

Note that artillery may also be used for non-combat purposes, such as launching grappling hooks across chasms, throwing halflings over walls, breaking down doors, and so on. Just ask your GM how many 'damage dice' worth of artillery power the effect you want would require!

Build Decoy: You may build wheeled decoys (normally human-sized, although you can choose to make them smaller), which you can use as trap-springers, distractions, or even improvised cover. An unpowered decoy which has to be physically pushed from place to place costs 2 inspiration; a wind-up decoy (can run for up to 1 minute per level) costs 4 inspiration, and a motorised decoy (can run for 10 minutes per level) costs 8 inspiration. The decoy has AC 5 and 2 HP per level. Note that you may use decoys as delivery systems for chemicals or automated artillery (see above). If not otherwise destroyed, decoys fall apart after 1 hour per level.

Build Transportation: You may turn a random heap of junk into a crude but effective vehicle. Different vehicles cost different amounts of inspiration, as follows:

Emergency Construction: If you're in a real hurry, you can scavenge for parts or build devices at double normal speed by increasing their inspiration cost by 50%. Round up any fractions.

Scrapheap Stronghold: Upon reaching 10th level, you may build a stronghold. Doing this requires 1d6 months work, at the end of which you will, by mysterious means, have built yourself a castle-sized stronghold guarded by a number of 0-level men-at-arms equal to your total inspiration pool. Upon close inspection, both the castle and the guards will turn out to be built out of sticks, duct tape, bits of corrugated iron, and similar unlikely objects, but they function just like a normal fort guarded by normal men. If your men-at-arms are killed, they can be replaced at a rate of 1 per day of work spent rebuilding them. If a year ever goes by in which you do not devote at least one full week to maintaining and repairing your stronghold, both fort and men collapse into heaps of scrap.