The long haul: time and distance in D&D

This post grew out of Bardaree Bryant's recent comment on one of my old posts, in which she asked about ways of communicating enormously long-distance travel in play - aside from 'OK, you ride for a hundred days, so hang on while I make a hundred random encounter checks', which obviously isn't very satisfactory. In my reply to Bardaree, I suggested that you could do it by simply emphasising the sheer amount of time involved in travelling long distances on foot or on horseback. And that got me thinking about the role that long duration might play in D&D, as well...

In many D&D games, neither long distances nor long durations come up very much at all. A lot of D&D scenarios follow the model from Keep on the Borderlands, where the Keep and the Caves of Chaos are only a couple of miles apart; Undermountain in the Forgotten Realms later went even further by having the dungeon directly under the starting tavern, meaning that the journey time between Home Base and Mythic Underworld wasn't hours or days, but minutes. But what if it's further? What if it's much further? What if the journey to 'the dungeon' is more like a band of sixteenth-century Spanish adventurers setting out for El Dorado than a gang of graverobbers deciding to break into a mausoleum in the churchyard down the road? Or consider something like the Lewis and Clark expedition of 1804-6, which spent eighteen months travelling from St Louis to the Pacific, five months on the Pacific coast waiting out the winter, and six months on the return journey - a round trip of almost two and a half years, even though they had much better equipment and navigational techniques than would have been available in the Middle Ages. What if the journey to the dungeon and back looks like that?


Many readers of this blog will probably be familiar with the old Pendragon RPG, in which the PCs are knights in Arthurian Britain. One of Pendragon's many innovations was the idea that the PCs aren't off adventuring 24/7: instead, adventuring is seasonal, something you do in the summer when the weather is warm and riding around in the woods all day isn't too much of a pain in the arse. A Pendragon party will ride off to slay a dragon or rescue a maiden or whatever, and then they'll come home, and that'll be their adventure for the year done: it's followed by a 'Winter Phase', where you get to roll a bunch of dice to find out whether you catch the plague and whether your wife dies in childbirth and how many children you have left by springtime, and then summer comes around and you round up your mates and go for another adventure. One adventure + one winter phase = one year, and over the course of a long campaign PCs are thus expected to age from brash young warriors in their late teens to grizzled veterans in their 30s or 40s. Play long enough and you might even end up playing as the children or grandchildren of your original characters.

Now, Pendragon uses this model because its PCs are plugged into a specific social structure, rather than just being the rootless freebooters so common in D&D. They can't adventure all day, every day: they have manors to run, peasants to oppress, lords to serve, lands to guard, and so on. But I think a variant on it could easily be used to model 'long-distance D&D': if there are a thousand miles of wilderness between you and the dungeon, then one expedition per year is probably the most you're going to be able to manage. You set out in spring; you reach your destination and have your adventure in summer; you trek back through the autumn; and winter is spent sheltering from bad weather and gathering plans and supplies for next year's expedition. 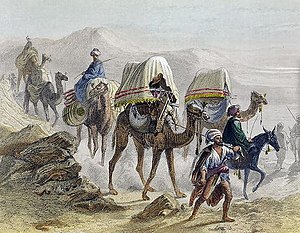 This 'annual adventure' model wouldn't be suitable for all campaigns, and would fit much more easily into a setting where the geography is on a North American or Central Asian scale rather than yet another Merrie Olde Englande knock-off, but I think that it has certain attractions. It gives a more plausible explanation for how the PCs have had time to recover from all their horrible injuries. It makes their increasing power level more believable. (I've never been a fan of the way D&D characters often go from raw beginners to mighty wizards and warriors within just a few months of game time.) It emphasises just how much wealth they've acquired: not just enough to pay their tavern bills for a few weeks, but enough to live off for months at a time and still pay for the supplies of the next expedition. It gives them a reason to build connections with (and invest resources in) their communities, because for much of the year those communities will be their actual homes, rather than just places they drop into briefly to heal and restock before heading back out to the adventure site. And if your group happens to be interested in dealing with Pendragon-esque issues relating to ageing and family and whatnot, then it opens up a space for them, too. PCs who go adventuring once a year can watch their children grow up. PCs who go adventuring once a day are unlikely to live long enough to have any children in the first place.

In practise, this would mean dividing the role traditionally played by 'town' into two. The place that the PCs retreat to at the end of a day's dungeoneering is just 'base camp', which is probably still just a few miles from the dungeon; but the place where they go to resupply, sell loot, hire new followers, and so on is their distant 'home port', so far away that going there and back means adding one year (or more!) to your PC's age on their character sheet. PCs would be aware that their adventuring career was likely to span years or decades rather than weeks or months, simply because of the amount of long-distance travel involved, and would thus have an incentive to engage in the kind of long-term activities which tend to seem pointless in many D&D games: getting married, having or adopting children, investing in businesses or property, training apprentices, founding new religions, starting political movements, and so on. The equivalent of the Winter Phase would be discovering after each adventure how all your long-term projects had developed in your absence, and establishing the direction you wanted then to take next. This would also neatly avoid having the game eaten by the minutiae of running a magical academy / political party / insane conspiracy / whatever: when your PC spends three-quarters of every year on the road, she has to delegate its day-to-day running to her NPC minions, instead.


By the same token, this structure would mean that the GM was free to make use of long-term situations: not just the 'immediate massive crisis' that is D&D's normal bread and butter, but slowly-simmering issues that might take years and years of game time to finally boil over. That lunatic preaching in the town square might just look like a bit of local colour the first time you see him, but eight years later he and his cult might have taken over half the city. (And, again, all these long absences provide the time needed for major changes to take place. 'When you finally set eyes upon your home city after eighteen months on the road, you can tell at once that it has changed dramatically since your departure...') You could explore plotlines that D&D campaigns usually don't have time for, like the rise and fall of entire governments or religions; you could even take the Pendragon model and start the campaign at the beginning of a new king's reign, allowing the actions of the PCs and the consequences of their adventures to shape whether his era turns out to be one of prosperity or disaster. Most D&D PCs are too anarchic to act as some monarch's Lancelot - but they're pretty well-suited to be their Drake or Magellan, with all the positive and negative consequences that can stem from that.

All this is still just a thought experiment at this stage, and while I do make frequent use of extended time gaps in the D&D games I run, I haven't yet tried building the regular lapse of years into the structure of the game itself. I think the idea might have some potential, though. If nothing else, it lets those enormous blank spaces on the map become meaningful again, if only because of all the things that have the time to happen elsewhere while you slog through them on the way to what you naively believe to be the 'real' adventure...