Before its fall - back when it still had a name - the Wicked City was the jewel of the Great Road. None of the other oasis kingdoms could compete with its wealth or its splendour. Caravans thronged the roads that led to it. Almost a million people called it home.

Feeding a city of that size was a serious undertaking. Some of its food was brought to it by the caravans, imported from neighbouring kingdoms in exchange for the manufactured goods in which the city's artificers excelled; but most of it was grown locally, in the vast network of irrigated fields which surrounded the city. Every river for a hundred miles was tapped by networks of irrigation channels which carried their water far from their natural courses, making land fertile which would otherwise have been arid; and every stream which once trailed off into the desert was rerouted by the patient labour of the people, their waters channelled back into the fields, instead. A thousand wells were sunk deep into the ground to tap the waters of the oasis. Great underground aqueducts were dug through the earth to carry the water where it was needed most. The city's irrigation systems were accounted one of the wonders of the world.


As the city fell into wickedness and ruin, and its population declined, the vast infrastructure of its canals and aqueducts sank into decay. Today the productivity of its farmlands is less than a third of what it was at their height; the intricate system of shared labour by which the irrigation system was once maintained has now disintegrated almost entirely, and it is only preserved from complete collapse by the work-gangs of slaves and water-powered automata which are dispatched by the city's government at irregular intervals to carry out particularly urgent repairs. As the channels dry up, the people of many outlying villages have reverted to subsistence farming, or simply abandoned their homes in the face of accelerating desertification. The subterranean aqueduct system has become infested with pig-men, who burrowed into them from God knows where years ago, and entire sections of it are now effectively no-go areas. Rusting chunks of water-pumping machinery litter the countryside. Out on the borders, where the cultivated land fades into the desert and the authority of the city's government is especially tenuous, roving bandit gangs have converted a number of dried-out wells into makeshift oubliettes.

In their current state, the hinterlands of the Wicked City resemble a kind of crazy patchwork. A collapsed irrigation channel can lead to the development of a few square miles of desert, surrounded on all sides by fertile and productive farmland; similarly, a still-functional well can keep a patch of land in cultivation when everything around it has collapsed back into arid dust. When roaming through the surrounding countryside, the state of any given area can be determined by rolling 1d10: 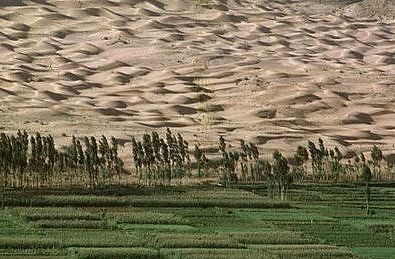 1: Productive farmland. One of the lucky areas where the old maintenance system still more-or-less functions, with everyone taking turns to repair and maintain the irrigation channels on a system which seems nightmarishly complex to outsiders, but which seems as natural as breathing to the locals . The area produces a large surplus of agricultural produce, which is sold in the markets of the Wicked City to feed what remains of its population.

2: Recently repaired. The work gangs recently passed through here in a flurry of activity, and for now the aqueducts and irrigation channels are working again and the land is fertile and fruitful; but the arrangements put in place to maintain them are desperately inadequate, and it's obvious that the works will simply have to be repeated in a few years time.

3: Repairs in progress. This area is currently a hive of activity, with chain-gangs of sweating slaves clearing and repairing irrigation channels under the watchful eyes of their pitiless Blood Man overseers. Huge clanking clockwork automata chew through the earth wherever heavy digging work is required; and whenever the mainspring of one of the machines is almost unwound, it stomps off through the fields to dip its water-wheels in the nearest body of running water, gradually powering itself up again. A handful of engineers and bureaucrats are overseeing the work from a hastily-erected pavilion, worrying about how to get the repairs completed on-time and on-budget; security is provided by a detachment of the King's Men, who mostly view this assignment as an opportunity to engage in petty extortion among the villagers. Everything's very chaotic, and enterprising PCs could probably liberate a few slaves and ride off on a hijacked digging machine before anyone realised something had gone wrong...

4: Marginal farmland. The irrigation infrastructure out here is in a very poor state of repair, but enough water gets through that the locals are able to eke out harvests from the soil, and on good years sometimes even manage to raise a surplus to export to the Wicked City. Opportunistic bands of the King's Men occasionally ride through the area, checking if times are good enough for the people to have something worth stealing.

5: Subsistence farmers. The few wells and irrigation channels that still work out here are barely sufficient for the few remaining farmers to raise enough food to feed themselves. All the people who worked the poorer fields have long since fled, and even those who live on what was once the best land now supplement their harvests with hunting and scavenging in order to keep their families fed. Everyone here is so miserably poor that the King's Men never bother to come out here, and as a result that there's a one in four chance that each half-abandoned village is currently inhabited by 1d6 wanted criminals and/or political dissidents, hiding out here from the authorities.

6: Abandoned villages. The irrigation channels have collapsed, and this area has reverted to desert, crisscrossed with dried-out canals and abandoned farmhouses sinking into ruin. Each settlement has a one in three chance of having someone hiding within it. (Roll 1d4: 1 = crazy old hermit, 2 = impoverished scavengers, 3 = wanted criminals, 4 = band of pig-men.)

7: Bandit camp. Abandoned by most of its former inhabitants, this mostly-desertified area has become the home of a gang of bandits, who raid nearby roads and villages and stash their treasures and victims at the bottoms of dried-out wells. Roll 1d4 to determine the nature of the band: 1 = former farmers, starving and desperate, 2 = opportunistic bandits from the desert roads, 3 = criminal gang from the slums of the Wicked City, 4 = Brigands of the Noonday Dark.

8: Pig-man infestation. This area of farmland was once supplied with water by underground aqueducts, but now the aqueduct network has become infested with pig-men and all the human inhabitants of the area have fled. The pig-men mostly live underground, filling their slowly-collapsing aqueducts with filth, but make regular scavenging trips to the surface.

9: Rusted machinery. This was once a major pumping station, redirecting huge volumes of water for agricultural purposes; but now the farmland is desert, the villages are abandoned, and the pumps lie rusting within buildings half-fallen into ruins. Masses of broken heavy machinery and unstable walkways over huge, empty reservoirs make this a very unsafe place to move around, and thus potentially a very good place to lure someone for an ambush. There's a one in three chance that a band of scavengers live here, looting the old machines for components that can be sold in the Wicked City.

10: Underground aqueducts. A major system of underground canals once brought water to this region; today they are mostly dry and empty, a now-purposeless network of tunnels that runs for miles in every direction. Occasional bands of pig-men, nests of brass-snout rats, and miscellaneous tunnel-dwelling crazies mean that they're not exactly safe, but if properly mapped out they would provide a great way of secretly traversing the area. There is a one in three chance that, if the tunnels are followed for long enough, they will eventually lead into the Maze beneath the Wicked City itself.