The Mouth of Darkness There is a saying among the slaves that the Wicked City is a beast with three mouths, all of them insatiably hungry for human lives. Its first mouth, which is full of water, is the city's irrigation network, upon which slaves labour endlessly in the pitiless sun, digging channels and aqueducts to bring water to the fields. Its second mouth, which is full of fire, is the foundry district, in which scorched and ragged work-gangs toil amid choking smoke to feed the flames of the city's industries. But worst of all is the third mouth, which is full of darkness: the coal mines beyond the city, where luckless multitudes sweat and perish beneath the earth, far from the holy light of the sun. Better to die by fire or by water than to endure the living burial of labour in the mines.

The Wicked City stands just thirty miles from some of the richest coal mines in the known world. It is because of these mines that clockworking technology and heavy industry first flourished in the city, and continue to do so even now that it is in its current ruinous condition: fuel is so very, very cheap, there, so cheap that its makes industrialists in other nations grind their teeth in envy, and prompts them to secretly wonder whether relocating their furnaces to an unholy police state in the middle of the desert might actually be worthwhile after all. Trains of camels and donkeys march in an endless rotation through the three-day round trip from city to mine and back again, bringing load after load of coal to feed the city's ravenous demand for fuel. And at the bottom of it all are the mine slaves, labouring down in the darkness, hacking coal from the coalface and dreaming their secret dreams of freedom and revenge. The Ministry of Industry would very much like the city's mines to function as a simple machine, in which slaves are fed in, coal is brought out, and as little thought as possible is given to what happens in the middle. Indeed, they would very much like to replace the slaves with simple machines, as clockwork automata who only know how to dig would obviously be far less troublesome to manage. But the logistical challenges involved have so far defeated them: their clockwork miners keep falling down holes, or blithely continuing to mine while their tunnels collapse around them, and the costs of keeping all that delicate clockwork machinery repaired and maintained in the inaccessible, rough-and-tumble mineshaft environment resulted in an unacceptable decrease in their profit margins. Clockwork diggers are still used in the mines, and in great numbers, but the complete replacement of human miners has proven impractical, or at least unprofitable: and so the slaves keep coming, and the Mouth of Darkness continues to devour its human prey.

High-intensity mining has been carried out in these hills for over a hundred years. As a result, the entire area is now riddled with worked-out mineshafts, most of which are just boarded up and forgotten about; the more remote of these have become hideouts for gangs of bandits, escaped slaves, and malfunctioning clockwork automata. Some escaped slaves with knowledge of clockworking have even upgraded the broken automata they scavenge with rough-and-ready machine intelligences, giving rise to a weird 'clockwork confederacy' of upgraded automata who lurk in the very deepest of the abandoned shafts, cutting coal from the walls to feed their autowinders and occasionally launching raids on mine teams with the objective of snatching any robotic diggers they may be using and 'liberating' them by upgrading their clockwork brains into sentience. New shafts are constantly mining their way accidentally into the sides of old ones, creating new opportunities for slave escapes, raids, and rebellions. The overseers who command the work gangs maintain order through sheer brutality, and are hated bitterly for it. Day after day, the mine slaves look for only two things: opportunities to escape, and opportunities to 'accidentally' maim their overseers in the most extravagant ways possible.

Coal isn't valuable enough to be worth stealing except in enormous quantities, so PCs who come to the mines are probably doing so because they're looking to start a slave rebellion, or to make contact with slaves who have already escaped. (Then again, 'you're a gang of slaves working down a coal-mine when suddenly you mine your way into an old, abandoned shaft, and have maybe ten minutes to make a run for it before your overseer realises you're gone' might not be a bad way to start a campaign...) Going into a working mine would obviously be a terrible idea - there are guards and overseers everywhere - so they'll need to navigate by stealth through the abandoned tunnel networks, instead. Quick scenarios can be created using the following table: 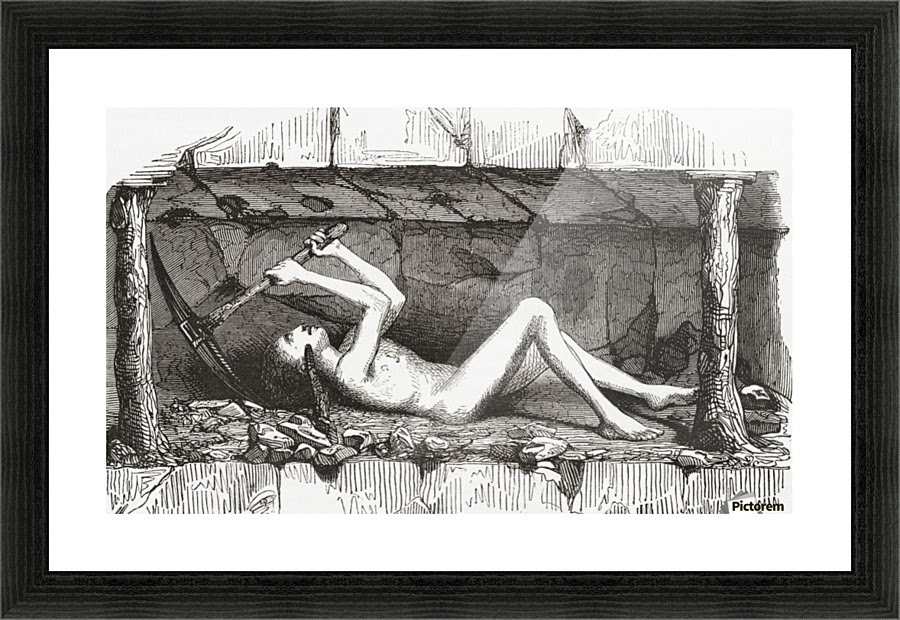