Dragon Warriors: You Can Never Go Back

I first came across the Dragon Warriors books as paperbacks, in 1991 or thereabouts. I think that I initially mistook them for Fighting Fantasy style gamebooks, which were released in the same format, and were very popular at the time. I swapped books 1 and 2 from a friend - in exchange for Deathtrap Dungeon and Trial of Champions, if I recall correctly - and later borrowed books 3, 4, and 6 from a local library. I never did get hold of book 5.

Dragon Warriors blew the doors off my tiny little mind.


I'd read Fighting Fantasy and Tolkien and Eddings and Brooks and far more Dragonlance novels than can possibly have been healthy for any one human being, and from them I'd absorbed the basic premises of generic high fantasy, but I'd never seen anything like Dragon Warriors before. Its dark, fearful, cobwebbed world of superstitious villagers, guttering torchlight, dripping forests, barrow mounds, and shadows on the mist immediately seized hold of my imagination, and has never really let go. That D&D5 module I wrote the other month? With all the fog and the curses and the creepy pagan idols? Pure Dragon Warriors.

I was used to thinking of goblins as disposable sword-fodder and slapstick comic relief: Dragon Warriors gave me goblins as wicked fey who came creeping out under the cover of dusk, wielding swords made from icicles and nets of spider-silk. Boggarts who danced along the moon-beams. Two-headed trolls that gibbered to themselves as they loped across the moors at twilight. Amoral, soulless elves who cast no reflection in mirrors. Wights who came drifting from their barrow-mounds, cold and pale and sad, to slay their victims and sow their corpses in the earth. Kings slumbering in hidden chambers beneath the forest. Knights placing the fingerbones of saints in the pommels of their swords to grant them power over evil. Skeletons clawing their way out of their own graves, furious at being buried in unconsecrated soil. I'd never read anything like it, and its distinctive, atmospheric blend of modern fantasy and medieval folklore absolutely enchanted me. When I finally read TSR's Ravenloft stuff, some years later, it seemed like pretty small beer by comparison.

A while back, the publishers of the new version of Dragon Warriors, Serpent King Games, put their core rulebook up on Drivethru as a Pay What You Want product, so I picked it up. The rules and the setting were the same, but the effect was completely different. The old black and white art had been replaced with more generic fantasy illustrations. The rules for the monsters were the same, but the monster descriptions had been cut to the bone, with no mentions of goblins making swords out of icicles, or pazuzus posing as 'forsaken lazars', or any of the other details which had so captured my imagination all those years before. The new sample adventure was... well, it was alright. But it didn't compare very well to the old ones.

(A brief aside on first encounters: in the original Dragon Warriors sample adventure, the first combat encounter is with a band of warriors who step out of a tapestry to defend the complex the PCs are trying to enter. When killed they merge back into the tapestry, on which they now appear as corpses. The tapestry is highly flammable, and burning or otherwise destroying it kills all the warriors instantly. It's weird, it's medieval, and it rewards PCs for thinking rather than just hacking. In the new one, the first encounter is with a bunch of feral dogs who attack for no reason and fight to the death. It's the sort of 'tutorial' fight scene I'd expect from a video game rather than an RPG.) 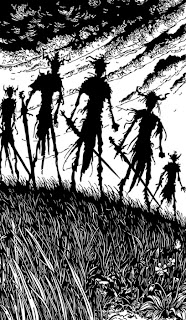 I should make clear, here, that large chunks of the new Dragon Warriors book is copied verbatim from the old ones, including all the wonderful magic items. (I've never really cared whether one of my PCs found a wand of magic missiles or not, but woe betide the NPC who stands between them and ownership of a Ring of Red Ruin!) And there is a separately-published bestiary book, which may well contain all the original monster descriptions. Overall, though, reading the new version of Dragon Warriors made me realise just how much of the effect of an RPG is communicated not through facts - these are the rules for armour, this is how many hits it takes to kill a goblin, and so on - but style. The feel of the Dragon Warriors world, its distinctive claustrophobic folk-horror vibe, was never really reflected in its rules: instead, it was communicated through the language, the illustrations, the sample adventures. Whenever the new version keeps the facts but changes the style, most of the value gets lost along the way. Those throwaway lines of description in the original monsters section have influenced me more than any set of rules or mechanics ever could.

I strongly suspect that half the RPG edition wars one sees being fought on the internet only pretend to be about factual changes to rules and settings, and are actually mostly about changes to the style in which they are presented. I don't say that to be dismissive: I actually think that style is at least as important a part of RPG writing as game or setting design, and quite possibly more so. (Any setting can be made boring if it gets described in a boring enough way, after all!) One of the strengths of a lot of current OSR stuff is that it foregrounds art and prose style in a way that is now much rarer in the works produced by, say, Paizo or Wizards of the Coast. The distinctive styles cultivated by individual OSR creators won't necessarily appeal to everyone, and may indeed alienate more people than they attract. But when they win, they win big. They win people over the way Dragon Warriors won me over in 1991.

Anyway. Despite everything I've said here, the new edition of Dragon Warriors is still well worth a look to anyone who's not already familiar with the game, and it's still PWYW. You can get it here. I just wish they'd been able to keep the original art...