While I was writing my condensation of Iron Gods I was listening to some music, and one of the songs that came up on my playlist was 'London Calling' by the Clash. Noting the similarities between the material I was writing about and the imagery of the song, it occurred to me that, in many cases, it would actually be pretty straightforward to use song lyrics as encounter tables. Just pick something where the imagery matches the appropriate mood and setting, roll a dice, and use that line number as the basis for your encounter. Choruses could either be ignored after the first repetition, or kept in to ensure that some results were more likely than others.

Here's a quick 1d20 post-apocalyptic random encounter table using the lyrics of 'London Calling'. I reckon you could roll on it at least three or four times before most groups realised that you were just running them through the lyrics of a Clash song... 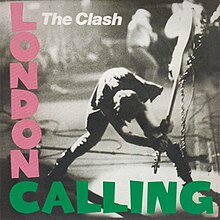 1: London Calling. A pylon of rusted steel and crumbling concrete leans in the middle of the woods, a speaker sagging from its top. At random intervals the speaker blares into life, emitting bursts of stirring patriotic music and reassuring announcements from men with RP accents insisting that the situation is under control and order will soon be restored. KEEP CALM AND CARRY ON has been stencilled onto the trunk of a nearby tree in red paint. Two skeletons sprawl beneath it, rusty revolvers jammed between each other's jaws, obviously participants in a suicide pact.

2: The Faraway Towns. An isolated settlement. Locals eye you warily, suspicious of anyone they don't already know. The shops shut at 5pm sharp and most of the shelves are empty because of 'the shortages'. Half of the houses are boarded up and abandoned, and there seems to be virtually no-one here below the age of thirty. No-one wants to talk about what is happening in the world outside.

3: War is Declared. A burned-out truck by the side of the road. A skeleton lolls at the wheel. Its trailer is, by some miracle, still largely intact. Within are bales of yellowing newspapers, tied with fraying twine, the front page of each copy bearing the same one-syllable headline: WAR!

4: Battle Come Down. First, the rattle of distant gunfire. Then, quite suddenly, the woods are swarming with bands of ragged, wild-eyed men wearing the tattered remnants of military uniforms, fleeing from cover to cover while firing poorly-aimed bursts of bullets in one another's directions. What, if anything, they are fighting about is deeply unclear. If captured they refuse to disclose anything other than their names, ranks, and serial numbers, and will escape at the first opportunity.

5: Calling to the Underworld: A gigantic pit in the ground, seemingly bottomless, surrounded by rusting excavation equipment. A thick coil of electrical wires emerges from a bank of nearby machines and squirms down into the darkness. From far below can be heard the distant echo of recorded voices, speaking on a loop in a language that resembles no human tongue.

6: Come out of the Cupboard, you Boys and Girls. A house in the woods, seemingly deserted although obviously recently inhabited. Two adult human corpses lie in an upstairs bedroom, clearly dead for years. A careful search will reveal five children of various ages hiding in a downstairs cupboard. They speak an odd dialect, barely comprehensible to anyone other than themselves, and become frantic with fear and rage if separated.

7: The Truncheon Thing. It stumbles through the woods, growling and hooting, all black leather and shiny rubber, a fetishist's dream or nightmare come to life. 'RETURN TO YOUR HOMES!', it howls, in a voice like a klaxon, hefting its weighted truncheon. 'THIS AREA IS UNDER MARTIAL LAW!' Then the beatings begin. It does not move like a human, but it bleeds rich red blood if wounded. It whimpers when it dies.

8: The Ice Age is Coming. The temperature drops. The wind dusts your faces with a swirl of unseasonable snow. From somewhere above you comes the cawing of migrating birds. You have perhaps a week before the ice comes. Make the most of it.

9: Meltdown Expected. Sirens wail mournfully in the distance. In an overgrown ruin in the forests, warning lights flash and flicker across the control panels of rusted machines. A long, long countdown is approaching its conclusion. In a concrete chamber beneath the earth, barely-contained energy roars and snarls like a caged beast. Soon it will be free.

10: The Wheat is Growing Thin. A still-functional farm hidden behind a screen of trees. Hunger-bitten labourers tend the meagre wheat-crop that grows from the blighted earth. At the forest's edge, someone has erected a crude wooden altar, atop which stands a figure of hacked wood representing a pregnant woman with the spreading horns of a stag. The grain of the wood is stained with recent blood.

11: Engines Stop Running. A ragged man stands by a stalled car, kicking it and cursing, virtually weeping with frustration. Within sit a family of pale children, gaunt and hollow-eyed and hopeless, surveying the trees outside with expressions of dull resignation. Safety is far away and night is coming. On the dashboard lies a faded map, depicting these lands as they once were in the almost-unimaginable days before the war.

12: I Have No Fear. An affable giant of a man strolls through the woods, here, cracking nuts and singing old marching songs, a pack and a shotgun slung across his broad and muscular back. For a loaf of bread and a swig of gin he will tell you stories of dead zones and battlefields, of bombed-out cities and miracles of technology hidden in lost bunkers buried beneath the earth. His arms and legs are densely packed with crude tattoos recording the names of his dead comrades. He has lost everyone and everything and now he has nothing left to fear.

13: London is Drowning. Huge bomb-craters, filled with floodwater, mark the place which was once a city. Leaning wrecks of concrete and steel girders protrude from the lake in a dozen places. On the crater's edge a handful of survivors still live, shoring up homes which constantly threaten to slide into the water. They live by catching the strange fish that swim among the ruins, and by selling the treasures of dead men that they cut from their swollen bellies.

14: I Live By the River. A house on stilts by a swollen stream. A rowboat lies beneath a patched tarpaulin, and the boatman sits on his raised porch, a hunting rifle across his knees, wary and mistrustful of strangers. There is no other way across the river, and he charges whatever he thinks he can get away with. In a kitchen that stinks of smoked fish lurks his wife, tired and resentful, mechanically gutting the day's catch and dreaming green dreams of liberty.

15: The Imitation Zone. Several acres of land enclosed by a rusting chain-link fence. Inside, everything is fake: plastic grass rustles around fibreglass trees, and styrofoam boulders prop up plywood houses, half-rotted by the rain. Within the houses stand life-sized mannequins, posed in attitudes expressive of distress. In the basement, a cage with cardboard-and-tinfoil bars has been torn open from the inside. Tracks leads off into the woods outside.

16: You Can Go It Alone. A young man with a body like a tensed spring lurks in the trees, watching you with the eyes of a predatory animal. If he ever knew a language then he has forgotten it. He wears a ragged khaki jacket and a pair of old boots, battered and indestructible. He can be coaxed from his hiding-place with offerings of food, but always retreats back into the woods to eat in solitude. On his left bicep is an ambiguous blue mark that might once have been a regimental tattoo.

17: The Zombies of Death. They were hit by so many different forms of experimental weaponry that it is unclear what animates them. Is it the radiation they glow with? The weird shards of unidentifiable metal embedded in their flesh? The cold, bluish fluids that now course through their veins instead of blood? Their breath smells of distant chemical battlefields. They are still holding out somewhere between the hills and the river, maintaining a ragged perimeter, waiting for orders that will never come.

18: The One With the Yellowy Eyes. A warbeast prowls the woods here, so warped and maimed that it is hard to guess what kind of animal it might once have been before all the modifications and the scars. Rusting staples connect bulging masses of artificial muscle. Off-yellow eyes state balefully out over a mouth full of mismatched fangs. The people fear it. It has forgotten how to die.

19: I Was There Too. On a crumbling wall in the woods, once part of some bombed-out building, someone has daubed a vast, vivid mural in brightly-coloured paint. In the background, cities burn and topple beneath a sky of flames: in the foreground, armies clash in a swirl of mutual butchery, their blood soaking the earth. In one corner stands a tiny, terrified figure, staring out at the viewer with wide and traumatised eyes. Beneath it someone has painted, in a shaking hand, the words: I was there.

20: I Saw You Running Out. Through the trees, a young woman can be glimpsed running flat out. Her camouflage jacket is several sizes too big for her, and her face and hair are streaked with someone else's blood. A makeshift pack is slung across her back, and a service revolver glints dully in her hand. She has seen you, but she shows no signs of slowing down or stopping. From far away, but getting rapidly closer, something large and implacable can be heard crashing through the forest in pursuit.
Posted by Joseph Manola at 14:39