Bringing Down the Hammer part 8: Companion, Renegade Crowns, Lure of the Liche Lord

This book describes itself as 'A Warhammer Fantasy Roleplay Miscellany', and that's pretty accurate. Probably the easiest way to summarise its contents is by listing its chapters:

Overall, the book feels like it adds up to less than the sum of its parts. Tobaro and a few of the new monsters are the only things that stuck with me.


When I first looked through this book, I thought it was nothing special. Instructions on designing a small sandbox setting in the Border Princes. Lots of tables to roll on to help populate your sandbox. Discussion of how ambitious PCs might rise from common sell-swords to take over their own micro-state, and of how to run 'domain-level' games involving the management of petty kingdoms, and handling relations with their equally petty neighbours. Nothing I hadn't seen before on dozens of OSR blogs, right?

But then I stopped myself, and thought: this was published in 2006. How many people were playing like that back in 2006, in the waning days of the D&D 3.5 era, with D&D 4th edition just around the corner? Well, if this book is anything to go by, apparently David Chart was. Renegade Crowns prefigures a huge amount of what would, over the next decade, go on to become OSR orthodoxy: sandbox settings populated via random tables, a grubby and inglorious world of petty kingdoms and robber barons, a tone of relentless grimness made palatable by ample use of black comedy, and an assumption that the PCs will be amoral freebooters trying to murder their way up the rungs of the feudal system rather than gallant champions of all that is right and good. If you're reading this blog, then this book probably has little or nothing to teach you, because you'll have learned it all years ago from other OSR bloggers. But even though David, as far as I can tell, has no connections with the modern OSR movement, I rather feel that he deserves some kind of honourary OSR status for writing it, back in the days when almost everyone else was busy arguing about exactly which combination of feats would allow their Illumian Swordsage Bloodstorm Blade to generate the maximum average damage output per round. 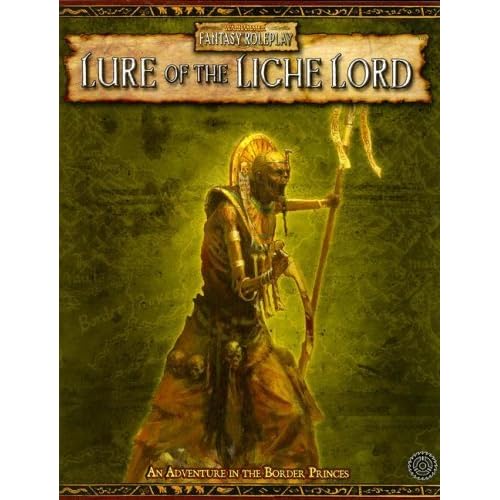 Despite the name, this adventure has nothing to do with the first edition Terror of the Lichemaster adventure. Instead it describes an area of the Border Princes, and the giant inverted pyramid full of undead buried beneath it. Like Karak Azgal, it's basically a giant dungeon plus some information about the situation on the surface. Unlike Karak Azgal, the situation on the surface is actually very dynamic, with a whole bunch of feuding factions, and the dungeon beneath is fully mapped and described over the course of sixty-three pages. The whole set-up is very open, which is refreshing after the clumsy railroading of some of the earlier adventures: but fundamentally it is what it is, and what it is is a seven-level Egyptian-themed dungeon full of traps and undead. If you happen to be in the market for one of those then by all means try this one, though as with Karak Azgal I rather feel that all this dungeon-crawling doesn't really play to WFRP's strengths.
Posted by Joseph Manola at 13:40