Who knoweth not of Paladin Girl?

Paladin Girl has become a cliche of modern fantasy art. She always looks the same. A young, slender woman in plate mail armour (often improbably form-fitting), no helmet, straight hair usually worn long and loose, conventionally-attractive face. On horseback, she might have a spear or lance. On foot, she usually carries a sword.
Paladin Girl is a fairly straightforward combination of traditional masculine and feminine signifiers. Her weapons and armour convey traditionally masculine power and 'hardness'; her face, hair, and figure convey traditionally feminine 'softness' and prettiness. The optimistic reading would be that strength and heroism are compatible with femininity. The pessimistic reading would be that women only get to be powerful as long as their strength remains compatible with conventional standards of female beauty. Either way, she is clearly associated with a particularly chaste and non-threatening form of sex appeal, with her armoured body symbolising her guarded sexuality. Unsurprisingly, she mostly turns up in works targeted at predominantly male audiences.
I became curious about where this image came from, and did a little digging. Here's what I came up with.

One obvious source is Joan of Arc. A sketch from her own time depicts her like this - 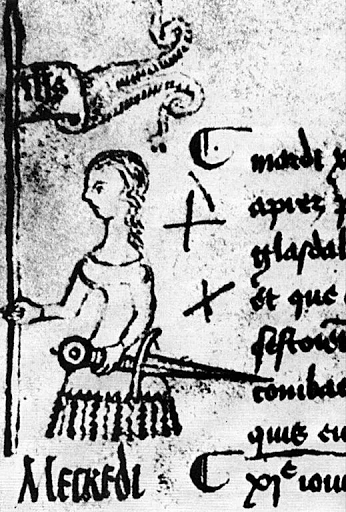 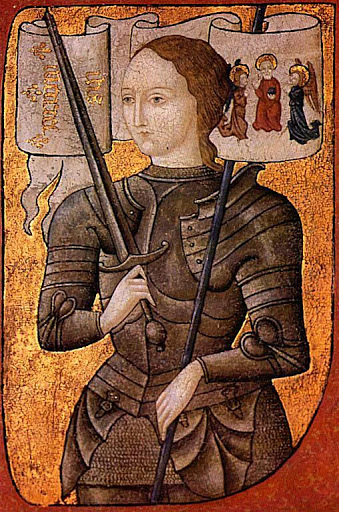 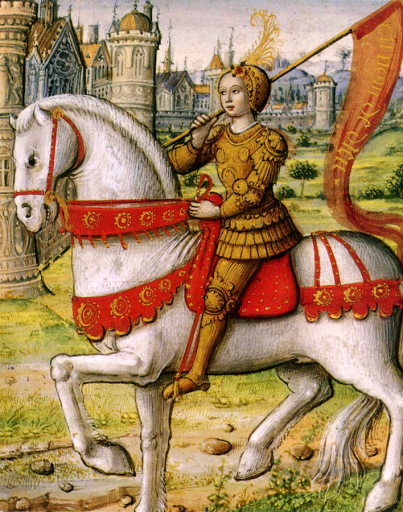 Then there's Bradamante and Clorinda, the original 'female knight' characters, who appear in Arisoto's Orlando Furioso (1532) and Tasso's Gerusalemme Liberata (1581), respectively. Around 1600 they were being depicted like this:

This, in turn, is not dissimilar to the way Joan of Arc was being depicted in the early seventeenth century:
So 'attractive female knight in armour' is clearly not a foreign concept in Renaissance art. But the armour looks like real armour, and there's little sign yet of the extravagant hairstyles that are so much a part of contemporary Paladin Girl imagery. Reubens shows Joan with long hair, but that's because she's literally letting her hair down. In battle she's obviously going to be covered beneath the black helmet on the ground beside her, relying on her plumed crest rather than her bare head to ensure she stays visible in combat.
Like most of modern fantasy iconography, Paladin Girl derives much more from nineteenth-century art than from anything actually medieval. As late as 1856, Delacroix was still painting Clorinda pretty much in the Renaissance style - 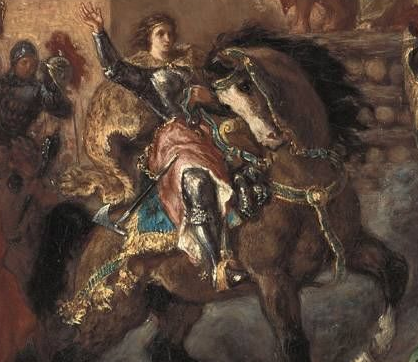 But three years later he also painted this image, of Ermina, also from Gerusalemme Liberata : 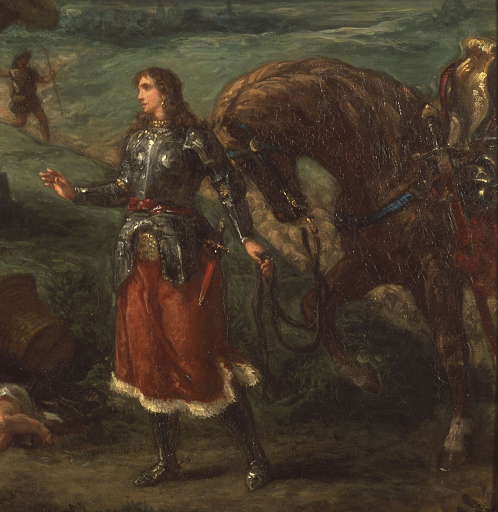 Classic Paladin Girl, right? Except the whole point of this image is that Ermina isn't a female knight: she's a princess disguised as a knight. (More specifically she's disguised as Clorinda, whose armour she's 'borrowed'.) Thus the long hair and the skirt: this is less wargear than cosplay. Clorinda, who's the real deal, wears full armour, has a more practical haircut, and carries a rather unfeminine bearded axe.
The real shift comes with the Pre-Raphaelites, whose chocolate-box medievalism lies at the root of most modern fantasy art. Here's Millais 1865 painting of Joan of Arc: 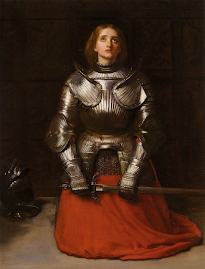 We're getting very close, now; and Walter Crane's Britomart, from his 1895-7 illustrations to The Faerie Queene, gets us even closer. Note sword, long hair, armoured skirt, and the large rondels on her chest that give the impression that her armour has breasts. 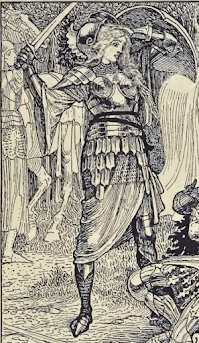 Leighton's 1901 painting The Accolade isn't a Paladin Girl image as such, but it clearly fed into the subsequent iconography. 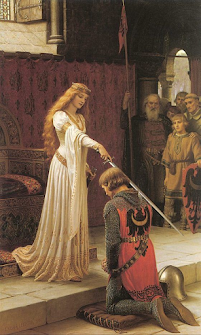 There are plenty of other late nineteenth- and early twentieth-century examples:


Note that more form-fitting armour is becoming the norm, here, with tapered waists and armoured skirts allowing these painters to display a classically feminine 'hourglass' figure even in full armour. (Contrast this with the armour in the sixteenth- and seventeenth-century images, which would mask the wearer's gender.) It's this iconography that fed into the 1948 Joan of Arc film starring Ingrid Bergman, although the need to make a costume that was actually wearable clearly led to some concessions to practicality.
Paladin Girl went into abeyance somewhat during the 1970s, when warrior women in fantasy art tended more towards the 'valkyrie' or 'amazon' archetypes. (E.g. Red Sonja, Valkyrie from Marvel Comics, Hildebrandt's interpretation of Eowyn, every woman Franzetta ever painted.) She only started to make her way into D&D via Larry Elmore's illustrations of everyone's 1983 fantasy waifu, Aleena the Cleric.

It took much longer for her to become the default, though. In the very same book, Elmore's other female cleric - an idiosyncratic reworking of the 'valkyrie' type - looked like this: 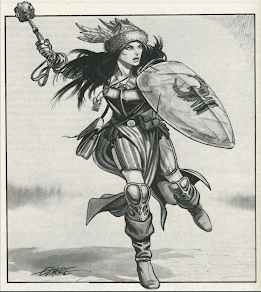 Most 'female fighter' illustrations in 1980s and 1990s fantasy media tended much more towards 'sexy' designs with lots of exposed skin, and armoured female fighters in D&D-adjacent media were more likely to look like this -
When D&D 3rd edition came out in 2000 there was a self-conscious push against this kind of imagery, with Elmore's influence rejected wholesale in favour of the 'dungeon-punk' iconography for which the edition is famous (or notorious). Its iconic female paladin, Alhandra, looked like this: 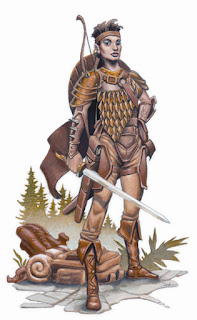 However, in 2004 World of Warcraft launched, and all its female paladin-types looked more or less like this: 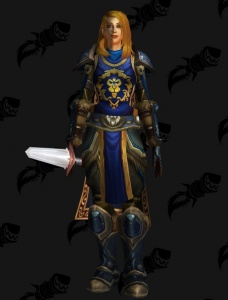 What had happened in the interim, of course, was an explosion in the popularity of anime, manga, and JRPGs in western geek circles. Manga and anime had a long preoccupation with 'female knight' characters, from the original Princess Knight manga series in 1953-6 to the epochal Lady Oscar (1972-3), and modern Japanese fantasy media is littered with 'cute female knight/cleric' figures. From the female priest in Dragon Quest III (1988), whose chainmail bodysuit, tabard, boots, mace, and haircut seem to have been directly based on Aleena five years earlier -

to the iconic figure of Saber from Fate / Stay Night (2004), who basically defines the type going forwards. 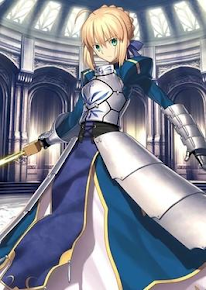 These Paladin Girl types grew out of the older pre-Raphaelite Joan of Arc figure reinterpreted through a manga filter, and in the early 2000s they were reimported to the West, with immediate effect. This anime-by-way-of-World-of-Warcraft style was everywhere in the fantasy art of the period. Tellingly, the 9th Edition of Magic: the Gathering (2005) saw the art for the iconic white card Serra Angel shift from this cone-bra stripper-samurai horrorshow - 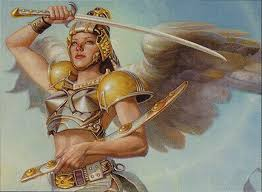 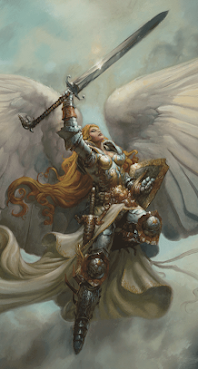 And that's where we've been ever since, basically. In 2009 Pathfinder even made it quasi-official by having their actual goddess of paladins, Iomedae, look like this: 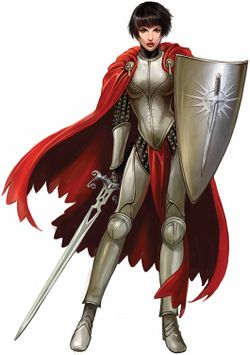 And finally we end where we began, with Joan of Arc.
So what does it all mean? Paladin Girl, I'd suggest, represents a compromise between the sexualised 'warrior woman' designs of the 1980s and 1990s, with their loincloths and armoured bikinis, and the ideals of equal-opportunities empowerment that most modern fantasy media pays at least lip service to. She's 'empowered' - she wears full armour! She's got a sword! - but in a way that emphasises her 'good girl' femininity, rather than clashing with it. (The armour emphasises her breasts, waist, and hips rather than hiding them, she's obviously wearing make-up, and her power is clearly wielded on behalf of the existing social order, not against it.) She stands for female empowerment in its most non-threatening, least socially-disruptive form. Probably this is what led male artists to develop the type in the first place, against the backdrop of the original women's suffrage movement of 1897-1918, which presented them with much less comfortable models of what female power might look like.
But I wouldn't want to paint too bleak a picture of Paladin Girl. She can get pretty silly in her more fanservicey incarnations, all bare thighs and miniskirts and breastplates with cleavage windows: but, despite this, I've known several women to whom this iconography really appealed. As I mentioned early on, the optimistic reading of the archetype is that femininity is not incompatible with martial fantasy heroics. Think of it as the Legally Blonde of fantasy art cliches.
Because if Elle Woods ever played D&D, you know her PC would look something like this... 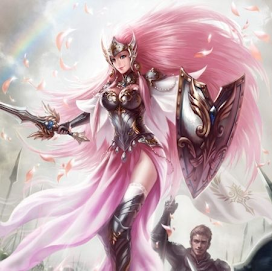