Escape from the Ghoul Queen!

This post is about a situation that arose in a recent session. One of my players suggested that I post it, and I thought it might be of interest as a case study of in-game problem-solving.

The situation was as follows: the party had arranged a meeting with the fearsome Ghoul Queen, in order to negotiate future trade arrangements with her people. The meeting was to take place a few miles from the ruined city she ruled over, one hour before dawn. The PCs really wanted to meet with the Queen, but they were also aware that she was very, very dangerous, and they needed to have an escape plan that would allow them to flee the meeting in case she decided to abduct or murder them, instead.

The party's resources
Take a look through the lists. Think about the situation.  How would you solve it? 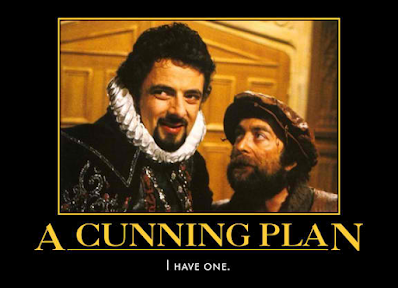 Here's what the party did.
The players were pretty happy with this triumph of lunatic ingenuity. I bet there were other solutions possible, though. They didn't even use the raven in this one.
Feel free to post your own solutions in the comments below!
Posted by Joseph Manola at 15:12