Remnants of the Nameless Empire: more monsters from City of Spires

More monsters that my players have run into during my current City of Spires campaign. These ones lean further into science fantasy, as one of the key conceits of the campaign is that it's a fantasy setting built on top of the ruins of an SF setting. The deeper you dig the more likely you are to start running into all the malfunctioning cyborgs and radiation zombies left over from previous ages of the world. 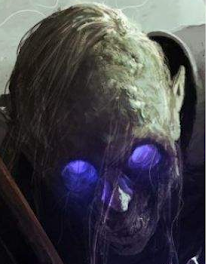 Long ago, the Nameless Empire procured the egg of an alien worm-god for study. At some point after the fall of their empire, this egg hatched, giving birth to the enormous alien monster known as the Great Worm. It remains trapped to this day in the subterranean vault it was originally stored in as an egg, but its dreams and magical radiation are powerful enough to bleed into the world outside.

Worm cultists are those wretched individuals who strayed too close to the Great Worm's prison, and found their minds overwhelmed by the power of its alien dreams. Compelled by its will, they dig themselves as deeply as they can into the rock and earth that entomb it, bathing themselves in the bizarre radiation that it emits until they are utterly changed, body and soul. Their bodies and limbs become slimy and segmented, studded with bristly hairs that allow them to sense vibrations in the earth and air. They can still just about speak, though their voices sound as though they're gargling with slime. At the apex of their transformation they tear out their own eyes, their empty sockets becoming hollow, slime-filled pits in what were once their faces. Mortal sight would only be a distraction from their new senses.

Worm cultists retain human-level intelligence, though the submersion of their minds in the dreams of the Great Worm tends to make them rather unhinged. They are utterly devoted to the Worm, and work tirelessly to free it from its prison. Their boneless bodies can squeeze through any space wide enough for them to get their heads through, and they can tunnel efficiently through soil and dirt. Their bristling hairs allow them to sense motion, making them hard to evade: they can also instinctively sense radiation, including the background radiation found throughout nature, and can recognise different substances from their differing radiation signatures. They are still blind, however, and cannot easily distinguish between e.g. one human and another unless they hear them speak. Drying out is very painful for them, and they take an additional 50% damage from heat- or fire-based attacks. They prefer to remain in cool, wet, dark locations whenever possible.

All worm cultists double as priests of the Great Worm, and have the spellcasting abilities of a cleric with levels equal to their hit dice.

This is what worm cultists eventually degenerate into after soaking up too much magical radiation. Their legs atrophy into vestigial stubs, while their arms warp into long, boneless, wriggling tendrils. Any hint of neck or waist disappears: apart from their arms, they now resemble giant segmented worms with distorted human faces at their apex. Their radiation-fried brains are only semi-intelligent, and they cannot speak. They have the same sensory abilities as worm cultists, and are even more proficient as tunnellers, but lack their spellcasting powers. They usually fight with crude clubs or spears.

Worm men are hermaphroditic, and are capable of breeding with one another, though their irradiated state means that their fertility is very low. They instinctively obey worm cultists, who use them as warriors, labourers, and guardians.

Cybernetic zombies built by the Nameless Empire to guard the resting places of its honoured dead. They resemble embalmed corpses held upright by cybernetic skeletons: their right arms terminate in a variety of blades (to allow them to assist with embalming work), while their left hands have been replaced with short range energy blasters. These blasters require three rounds to reload between shots - zomborgs will try to keep their distance while their blasters are reloading, but if their enemies close with them they will fight with their blade-hands, instead.

Zomborgs sense intruders via motion sensors built into their eye sockets, whose blinking red lights are easily spotted in the darkness of their ruined vaults. They have no other senses, and are oblivious to noises, smells, lights, etc. They have no intelligence beyond their preprogrammed 'guard-hunt-kill' and 'autopsy-embalm-preserve' routines, and are incapable of learning from experience. (My PCs mostly dealt with them by luring them into traps.) 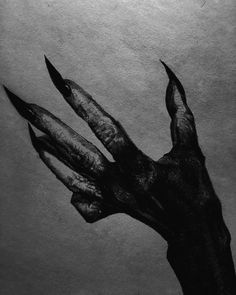 These hairless subterranean humanoids are a deliberately devolved caste of engineer-slaves created by the Nameless Empire. Their stature is dwarfish, averaging only 4' high, but their bodies are lithe and muscular and they have freakishly long arms ending in long, clever, multi-jointed fingers. They can see in the dark, and underground they are as agile as monkeys, effortlessly climbing and swinging along walls and ceilings. They are capable of squeezing their bodies through narrow cracks like contortionists, and their nests are usually found in spaces only reachable via fissures so narrow that only they can squeeze through them. They possess only animal-level intelligence, but have an instinctive knack for mechanical labour if commanded to undertake it via the correct machine-noise signals.

Stranglers get their name from their secondary function, which is to protect the areas they inhabit against intrusions from unauthorised personnel, i.e. anyone without the correct subdermal microchips. When they sense intruders into their ruined underground complexes they will creep stealthily down upon them, aiming to sever ropes, douse lights, and otherwise render their victims blind and vulnerable: then they will leap down upon them in chattering swarms and try to claw and strangle the life from them. If a Strangler hits the same target with both claws in the same round it has its hands wrapped around their throat, and will proceed to throttle them for an automatic 2d4 damage per round in place of its normal attacks until either it is defeated or its victim dies. (Obviously, this special attack only works on enemies who have necks and need to breathe.) They attack only from ambush and in packs, and will retreat if faced with determined opposition.

Stranglers are usually found in the wreckage of Nameless Empire factories and laboratories, some of which still house semi-functional AIs dozing through the centuries on sleep mode. Explorers who manage to fight their way through the Stranglers and contact such an AI may be able to persuade it to microchip them if they can convince it that they are there on legitimate imperial business, though the AIs may demand that they perform other tasks in return in service of their long-dead empire.