Condensation in action: from 600-page AP to 3-page hexcrawl!

So, after moaning about the tendency of Pathfinder Adventure Paths towards massive and needless bloat, I'm going to give an example of what I think they are good for. I've just finished skimming my way through the 600 pages of the Kingmaker adventure path, which is Paizo's attempt at doing a sandbox: they don't do it very well, with railroad tracks laid down all over the place, but as usual there's some good material scattered through them here and there. I reckon that if you cut all the fiction, the railroaded plot arcs, the interminable stat blocks, the poorly-thought-through mass battle and domain management rules, the needlessly huge map, and all the boring encounters, it's possible to cut those 600 pages down into a pretty good 3-page hexcrawl set in a single decent-sized forest.

So here it is. All the encounters are adapted from Pathfinder's Kingmaker Adventure Path, by Hitchcock, McCreary, Vaughan, Spicer, Nelson, and Pett. The hexmap is my own work. Feel free to borrow any or all of it for your own campaigns!

Hook: The PCs have been sent by the king to explore the monster-haunted forests on the southern edge of his kingdom. If they can find some resources worth exploiting and clear out the worst of the monsters, he's promised to grant them a fief in the area as a reward. 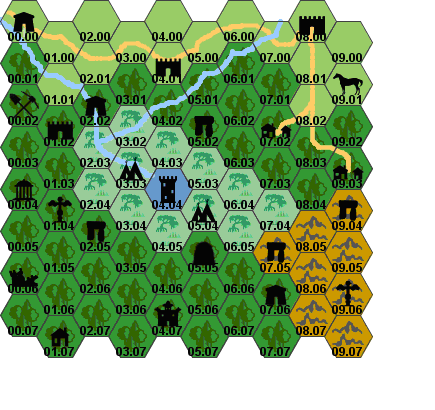 0000: An inn run by a middle-aged couple, currently being squeezed by the bandits at 0100. They offer a reward to anyone who can drive the bandits off.

0001: A nest of tiny (1' high) evil fairies living in tunnels under a huge old tree. They're at war with the kobolds at 0002, and have stolen their holy statue.

0002*: An abandoned silver mine inhabited by a tribe of kobolds, who believe that their tribal gods will destroy them unless they can get their idol back from 0001. There are growing tensions between the tribe's chief and their 'shaman' - actually a gnome wizard who was accidentally polymorphed into a kobold, and is now trying to destroy the tribe from within. If the kobolds were cleared out the mine could easily be made profitable again.

0003: This grove is the home of a friendly dryad and her satyr lover.

0004*: A ruined and overgrown temple, guarded by a huge bear. The bear is possessed by the insane spirit of the temple's last priest, and thus defends the place with all the intelligence of a (crazy) human.

0005: Hunting ground of a 'scythe tree', an intelligent, evil magic tree which wanders around impaling people with its sharp branches. The dryad at 0003 would love to see it destroyed.

0006: Ruined abbey haunted by the ghost of a mad rose gardener. He fell in love with a water nymph and trapped her in a water clock, hoping that she would one day agree to marry him; she didn't, and they're both still there. She knows the location of a powerful magic sword which is hidden nearby.

0100: A camp of bandits preying on passing travellers. Their leader is a slightly crazy young woman with a hatchet and a very dark sense of humour. They answer to the bandit lord at 0102.

0101: A radish field tended by the kobolds at 0002, who can often be found in the field, gorging themselves silly.

0102**: A ramshackle fort inhabited by bandits. The bandit lord is usually drunk, and almost never removes his enchanted helmet, which is carved in the shape of a stag's head. His lieutenant is sick of outlaw life and will betray him if given half a chance. The bandit lord's father, once cruel and abusive but now elderly and infirm, is kept locked in the basement; he knows druidic magic, and serves as the group's healer. The ground around the fort was once a burial ground for the unclean dead, and only the bandits know which parts are safe to walk through: just blundering about is a great way to get eaten by zombies.

0103: The home of an even madder hermit, the younger brother of the one from 0301, who lives there with his pet lynx. He has the portrait of their mother, but won't give it up without a fight.

0104: An overgrown statue of an ancient god of the hunt. If cleared and consecrated by a cleric, it will bestow a blessing upon anyone who offers up a sacrifice to it.

0107*: A witch whose house is surrounded by magical, animated thorns, tended by mutated three-armed giants.

0202: A camp of loggers cutting down valuable timber, currently plagued by misfortune due to the meddling of the nixie at 0203 and trying to work up the courage to go and kill her.

0203: The lair of a nixie, who has taken a dim view of the loggers wrecking her home and is using her magic to interfere with their work. She is protected by two charmed loggers.

0205*: An ancient barrow-mound, still haunted by a barrow-wight. Within, carved stone faces breathe out black mist upon intruders, sapping the life-force of the living.

0301: The lair of a mad hermit. He likes to be left alone, but would very much like to retrieve the portrait of his mother stolen by his brother after their final argument years ago. (His brother lives in 0103.) He is something of an alchemist, and offers payment in potions.

0303: Frog-man village. Their leader has been charmed by the naga at 0503, and is trying to persuade them to take bloody action against the human settlers.

0304: Swamp haunted by bog mummies, the fallen priests of some ancient witch goddess.

0401**: A small fort surrounded by a meager settlement. The lord of the fort has recently taken a new mistress, much to the displeasure of his wife, who has just invited her brother – a powerful wizard – to stay with them as a long-term guest. The lord's best warrior has recently gone missing. (He’s being held captive by the witches at 0502.)

0402: A woman, the last survivor of her smuggling gang, is camping out here by the river. The rest were hanged by the lord of the fort in 0800 and she is eager for revenge.

0403: The lair of a solitary frog-man, exiled from the village at 0303 after making an unsuccessful challenge for leadership. Would welcome new friends.

0404*: Haunted tower on an island. At night, ghosts flicker around its fallen walls in the form of glowing balls of light.

0406: A dream from another world presses closely against this reality, here, manifesting as nightmares, hallucinations, and glimpses of immense black wings that blog out the sky. Spending too long here is a good way to go crazy.

0407**: A great serpent curls around the base of this ruined manor. Inside it, time is unreliable; mirrors reflect people who aren't present, and it's full of voices from people who haven't been there for years, or won't arrive for years to come. Some rooms seem newly-furnished, while others appear thousands of years old. A staff of ghosts act as servants and guards. Six eyeless nymphs roam the corridors, weeping tears of blood from empty sockets. The queen of the house is a mad nymph sorceress who visits nearby people in dreams, leaving them with locks of her hair that drive them to deeds of madness and passion and grief. The sword from 0006 is made from her own rejected heart, and possesses great power when wielded against her.

0502*: The tomb of an ancient hero, converted into a makeshift shrine by a coven of three witches. They have abducted a local warrior and are using a combination of magic, the influence of the hero's intelligent sword, and old-fashioned brainwashing to persuade him that he is actually the hero reborn, come to help them reclaim the land for their horrible old religion.

0503*: Lair of a vicious swamp-dwelling naga. She has charmed the leader of the frog-men at 0303, and if she is killed (or persuaded to release him from her spell) then he and his tribe will become much less aggressive.

0504: Tribe of lizard-men who worship the ghosts at 0404, believing (incorrectly) that they are the spirits of their ancestors.

0505*: Cave inhabited by a gang of ettercap. Webbed up among their victims are the remains of a prospector, with a map showing the location of the gold deposits in 0606.

0603: A wandering giant, usually drunk, looking for berries suitable for making moonshine with.

0606: The rocks here contain substantial deposits of gold ore, although only an expert or a dwarf would be likely to notice it while just passing through.

0700: There was a bridge here, but the bandits from 0102 burned it down and drowned the bridge-keeper after stealing his accumulated toll-money. Now if anyone rings the bell, his waterlogged corpse comes shambling out of the water. Only killing the bandit lord in 0102 and throwing his body into the river will put his soul to rest.

0702: Small village in a clearing. The villagers are secretly cultists of the ancient witch-gods, and maintain a hidden shrine beneath the headman’s house.

0705*: Valley full of gigantic, ancient grave markers, eroded to the point of illegibility. It is protected by a zombie cyclops, preserved by ancient magic, whose badly-decayed mind is tormented with fragmentary memories of some kind of ancient cyclops empire which may or may not have actually existed.

0706*: A huge troll lairs in a ruinous house with his six black saber-toothed tigers. Severed heads hang by their hair from spikes around his home, candles flickering in their mouths and eyes. He seeks a human bride.

0800*: A fort, the base of a minor frontier lord. If the PCs look like they're actually close to establishing a viable claim in the area he'll invite them to a tournament at his fort, and use their absence as an opportunity to send his soldiers to seize all their holdings.

0901: A herd of wild horses, led by an intelligent talking magical horse, once the steed of a dead druid.

0904**: The tomb of an ancient undead cyclops wizard, recently awakened by an incautious treasure-hunter from the village at 0903. He's enchanted all the villagers and led them down into his tomb, where he's eating the brain of one villager a day in order to absorb their memories and learn more about this strange modern world he's woken up in.

0906: A 30' tombstone engraved with tens of thousands of names, guarded by an immense four-armed giant and surrounded by perpetual snowfall regardless of the season.
Posted by Joseph Manola at 02:05