The lost colours of D&D 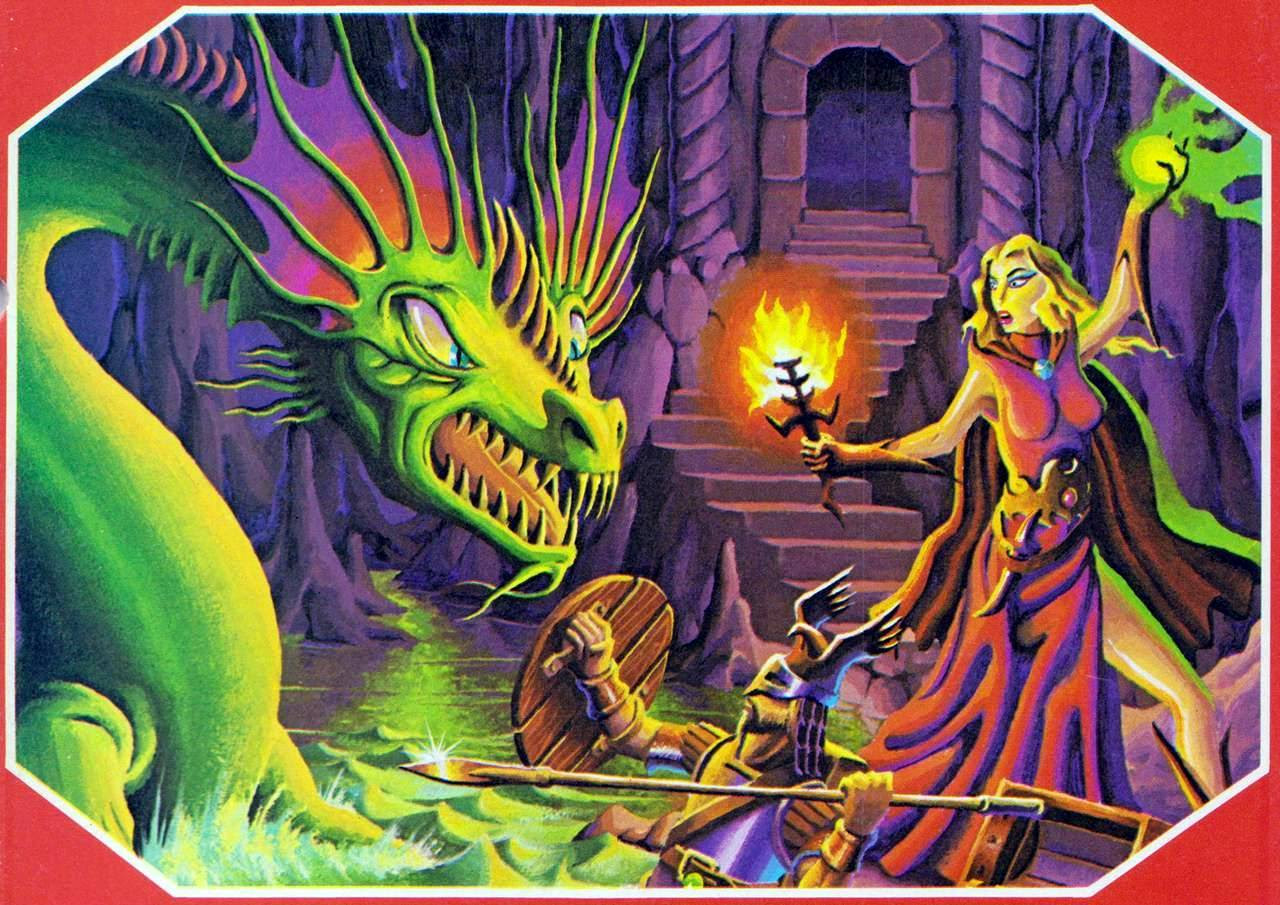 So I looked up ogres in the 1st edition Monster Manual recently, and I came across this text:

The hide of ogres varies from dull blackish-brown to dead yellow. Rare specimens are a sickly violet in color. Their warty bumps are often of different color - or at least darker than their hides. Hair is blackish-blue to dull dark green. Eyes are purple with white pupils. Teeth are black or orange, as are talons. Ogres wear any sort of skins or furs.

Ogres come in three colours: blackish-brown, yellow, and violet. They are covered in 'warty bumps' of 'a different color': so presumably you could have a yellow ogre with violet warts, or some even weirder combination. Their hair is either blue or dark green. Their eyes are purple with white pupils. Their teeth and claws are either black or orange. In short, I have been imagining D&D ogres wrong for my entire life.

Imagine, for a moment: a nine-foot tall brute of a monster with violet skin covered in yellow warts, orange teeth and claws, dark green hair, and purple eyes with white pupils. That, apparently, is what D&D ogres are actually supposed to look like. Did anyone ever describe them like that? Did anyone draw them like that? All the illustrations I can find just depict them as great big grey-brown thugs...

A little more reading soon demonstrated that the ogres were not an isolated case. There were yellow bugbears with brick-red fur, green eyes, and red pupils:

The skin of bugbears is light yellow to yellow brown - typically dull yellow. Their hair ranges in color from lusterless tannish brown to brick red. Their eyes are greenish white with red pupils.


There were silver-haired, amber-eyed elves wearing yellow clothes and purple cloaks, and nicknames based on their eye colour:

Grey elves have either silver hair and amber eyes or pale golden hair and violet eyes. The latter sort are generally called faeries. They favor white, yellow, silver, or gold garments. Their cloaks are often deep blue or purple.

There were gnolls with green-grey skins, reddish manes, amber nails, and armour made of horn:

Gnolls have greenish gray skins, darker near the muzzle, with reddish gray to dull yellow mane. Eyes are dull black and nails are amber colored. Their armor is of horn, metal plates, and leather; like their fur capes and vests, it is shabby, and the latter are moth-eaten and dingy, being brown, black or grayish pelts.


Gnomes were the colour of wood:

Most gnomes are wood brown, a few range to gray brown, of skin.


Goblins can be red, yellow, or orange (no green ones yet), with red or 'lemon yellow' eyes:

Goblins range from yellow through dull orange to brick red in skin color. Their eyes are reddish to lemon yellow.

The hairy hides of hobgoblins range from dark reddish-brown to gray black. Their faces are bright red-orange to red. Large males will have blue-red noses. Eyes are either yellowish or dark brown.


The brown skin of orcs has a 'bluish sheen' and their ears and snouts are pink. (This is back when orcs were still pig-men, of course.)

Orcs appear particularly disgusting because their coloration - brown or brownish green with a bluish sheen - highlights their pinkish snouts and ears.


Red, orange, yellow, purple, blue... all those colours bled out of the game as time went on. Modern orcs are green. Goblins are green. Gnolls are brown. Hobgoblins are sometimes orange but usually brown. Ogres are brown. Bugbears are greenish-brown. Gnomes have human skin-tones, rather than being wood-coloured. Even elves have become far less glam-tastic than they used to be.

Now, there are probably a whole lot of reasons for this. One would be the move away from stories inspired by 1930s weird fiction, which drew its colour palette from the Decadent and Surrealist art of the previous generation, and towards those based on 'map fantasy' novels, which made use of a more chastened colour palette derived ultimately from the Pre-Raphaelite art of the 1840s. Another would be the enormous popularity of the goblinoids from Warhammer, which firmly fixed orcs, goblins, and their kin as 'greenskins' in the popular gamer imagination. A third would be changing fashions in fantasy art, away from the space-rock psychedelia of the 1970s towards the much more grounded grey-green-and-brown aesthetics of most modern fantasy illustrations.  (Erol Otus loved using neon-bright colours. We shall not see his like again.) The move towards more naturalistic colouration certainly makes the monsters feel a bit more 'realistic'; a green goblin and a brown ogre feel like variations on real creatures, things that might conceivably evolve in a natural environment full of mud and trees, whereas a yellow goblin and a purple ogre feel like escapees from a children's cartoon.

Still, though.... orange goblins. Blue-green pig-orcs. Yellow bugbears with red fur. There's something to be said for them. Their 'unnaturalness' could be a strength as well as a weakness: these sound like things which broke out of a wizard's lab, or crawled out of a crashed spaceship, or stumbled through a portal from a world very different from our own. They have an obvious out-of-place oddness about them. Why do bugbears have red pupils? What kind of fucked-up world do they see through their green-and-red eyes?

In my games, I've always described humanoids as grey, or green, or brown; but the next time I run something with more of an old-school, science-fantasy vibe, I think I'm going to mix it up a bit. Bring back the blue orcs and the yellow goblins and the green gnolls and the purple ogres. If nothing else, they should act as big, brightly-coloured signs that we're not in Tolkien any more.
Posted by Joseph Manola at 09:18