Summon Evil Hedgehog: A spell from 1854

My trawl-through of mid-nineteenth-century literature is getting weird, yo.


Nicodemus: The Black Art? Here is your very good health! - I wish you could see my master's room, after he has been trying to call up the devil! Lord, sir! there's no end of skulls, and chalk marks on the floor, and stench of sulphur, and what not - but I don't believe that, with all his pains, he ever brought the devil up.

Second Familiar of the Inquisition: Take another cup. - But he tries it sometimes!

Nicodemus: Punctually upon Wednesdays - about midnight, when the whole household have gone to sleep. But he's not up to the trick: he never could raise anything larger than a hedge-hog.

Second Familiar: But he has done that, has he?

Nicodemus: Of course! Anyone can raise a hedge-hog. But I'm not going to sit here all night seeing you drinking. I must go home to translate Plotinus, who was a respectable father of the Latin Church. Take my advice and go home too - you are both drunk. Where's my beaver? Don't attempt to offer me two, in case I put the phantom one on my head. I say - if there is a drop remaining in the bottle, you might offer it by way of courtesy. Thanks, and take care of yourselves. [Exit]

First Familiar: What say you to this story? A clearer proof
Of arrant sorcery was never given
Unto the holy office.

Second Familiar: It is complete.
He raises hedge-hogs! That's enough for me. 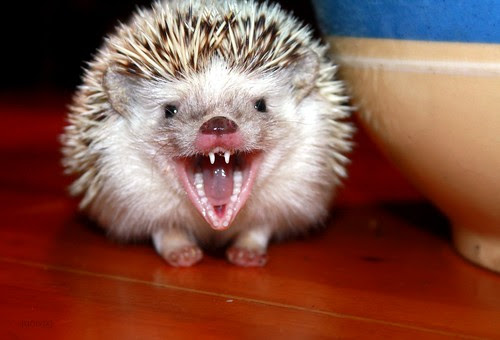 Summoning an evil hedgehog requires chalk, sulphur, and the skulls of at least six humans or large animals, and can only be attempted at midnight on a Wednesday. The spell is most commonly cast by novice magic-users, usually while drunk. Casting the spell requires a 30 minute ritual and the burning of lots of sulphur, at the end of which one of the skulls tips over and an evil hedgehog crawls out from underneath it. If cast by a magic-user of level 5 or higher, there is a 1% chance per level that something really dangerous shows up instead, so the spell is usually avoided by more competent magicians.

The evil hedgehog looks like a regular hedgehog, but more sinister. It can roll itself into a ball and bounce along the ground at a brisk walking pace, and will use this mode of transportation to follow its summoner around until the following Wednesday at midnight, at which point it returns to wherever evil hedgehogs go. During this time it will obey any non-suicidal instructions given to it, and can be used as a messenger, watch-hedgehog, carrier of very small objects, and so on. It cannot speak, but will communicate via biting - one bite for yes, two bites for no. Its teeth are very sharp.

The evil hedgehog can be ordered to attack someone, which it will do by running up their legs (inside their trousers or under their skirts if possible) and proceeding to maul their most tender regions with its spikes, teeth, and claws.This doesn't do any damage, but it's very painful and distracting, and its victim must make a save vs. paralysis each round to be able to do anything except shriek and try to knock it off them. Once the save is passed, the hedgehog is dislodged, causing it to bounce away and lie stunned and useless for the next 1d6 rounds: during this time, it can be killed by anyone willing to spend an action stomping on it. At any other time, killing the evil hedgehog requires a successful attack against AC 0 (AC 20 if you use ascending AC) due to its extreme bounciness. If killed, its explodes into a ball of sulpherous soot and its soul is banished back to Hedgehog Hell, there to await its next summoner. Targets who have very thick skin or proper armour are normally immune to the evil hedgehog's attacks.

Normal hedgehogs hate evil hedgehogs, and will shun them whenever possible.
Posted by Joseph Manola at 05:39