I wrote most of a thing and you can buy it! (Although not from me.) 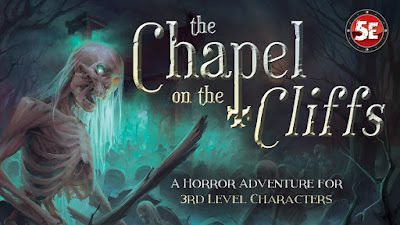 What's that? Fifth edition? What madness is this?

So, funny story. A while back Benoit de Bernardy, who runs the D&D 5e website Goblinstone, put out an open call for people to submit adventures for him to publish. I'd never played 5e - B/X is more my style - but I'd heard people say it wasn't that different to the older editions; so I wrote a scenario and sent it in, and to my surprise Ben liked it enough to buy it off me. He then sorted out the art and the maps and the layout, and made some changes to the adventure, to make it bigger and more fifth-edition-y: I'd written the whole scenario as essentially one big puzzle for the PCs to solve, and Ben's rewrite added more action and combat and whatnot, as well as all that fifth edition 'roll this skill to get some information' stuff. He then put the resulting project up as a kickstarter, which you can see here.

Anyway. The module is called The Chapel on the Cliffs; it's set in a thinly-disguised version of late medieval south-west England, and it's a Gothic horror adventure about getting chased around a haunted village by a fuckload of angry skeletons. It's a 5e module, but it should be easy to run in B/X D&D instead, especially as B/X was what I wrote it for in the first place. It also features art by the rather talented Raluca Marinescu, who painted both the images featured in this post. Five euro gets you a pdf, and ten euro gets you a print copy. Money goes to Ben, not me, but he deserves it for getting the damn thing into a publishable state...

If anyone runs it, I'd love to hear how it goes!