I've read a few Dungeon Crawl Classics adventure modules, but I've never read or bought the actual DCC system; I feel I already have enough OSR-style systems for running fantasy dungeon crawls to last me a lifetime. Mutant Crawl Classics, however, was another matter. I mostly backed the kickstarter because of the number of free adventure modules they promised to throw in, but I was also intrigued by some of what was promised for the game itself: a post-apocalyptic RPG which offered the chance to play as a mutant, or an animal-person, or a plant-person, or a shaman who reveres a pantheon of ancient artificial intelligences as divinities. Anyone who's read much of this blog will know that unconventional PC races and post-apocalyptic science fantasy settings are two of my very favourite things in RPGs, so I backed MCC in order to see what its authors would come up with.

MCC is a stand-alone RPG whose core system is very similar to the one in DCC, which is to say that it's basically a variant of TSR-era D&D: 3d6 for stats, classes and levels, d20 vs. AC to hit, and so on. Wisdom is replaced by Luck, which can be spent to gain bonuses on rolls, and your level 1 hit points are added to your level 0 hit points, which makes characters a bit tougher than their TSR D&D counterparts. Magic items are replaced with scavenged items of high technology (complete with rules for figuring out how to use them without killing yourself), while magic itself is replaced by mutations (including psychic powers) and prayers to the aforementioned pantheon of AIs, which may heed your entreaties enough to lob the occasional orbital laser blast in the direction of your enemies. Classes are Sentinel (=fighter), Rover (=thief), Shaman (=cleric or magic user), Healer (=the one that no-one wants to play because all they can do is heal other people's injuries), and three others which have no direct equivalents in standard D&D: Mutant, Manimal, and Plantient. The game's overall vibe is very Beneath the Planet of the Apes, with nods to other sources such as Blade Runner and Red Dwarf, replicants and hard-light holograms being among the artificial lifeforms that the now-vanished ancients left behind them. Hard science fiction this is not.

There's a very lightly sketched-in setting, which casts the PCs as members of a primitive tribe scavenging among the ruins of a fallen high-tech civilisation, complete with an in-setting justification for the 0-level character funnels which DCC is famous for: to become full members of their tribe, young adults must undertake a rite of passage in which they travel out into the ruins and retrieve an item of lost technology. Their status in the tribe will depend upon the value of the item that they bring back: so all you need to do is gather together a bunch of ambitious adolescents willing to risk their lives for an impressive score, and bam, instant excuse for sending a whole bunch of level 0 characters into some meatgrinder of a post-apocalyptic dungeon complex. Those of them that make it back with valuable relics of the ancient world will be promoted to Seekers, whose task it is to procure more such items for their tribe, meaning that sneaking around ancient ruins in search of Sufficiently Advanced Technology is now their actual day job. The whole set-up is designed to provide an excuse for moving the PCs from one post-apocalyptic dungeon crawl to the next with an absolute minimum of fuss. You could run other sorts of adventures with it, but you'd have to do pretty much all the work yourself. 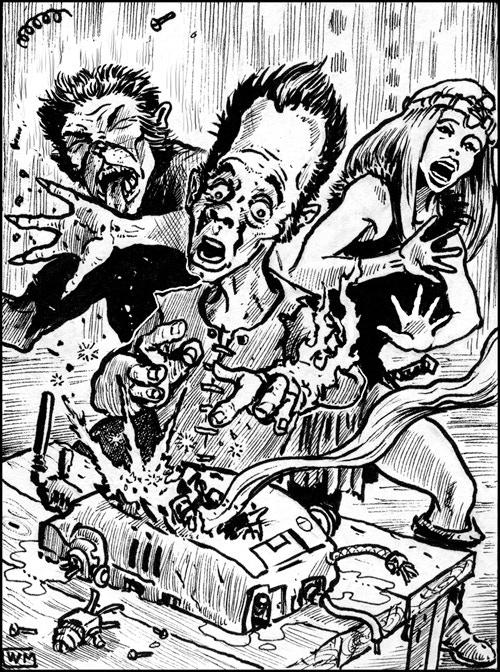 The mutants are pretty much what you'd expect: they get a random number of random abilities at random power-levels. The manimals and the plantients are a bit disappointing, in that their randomly-assigned plant or animal features are almost entirerly cosmetic: they basically use the same rules as mutants, except they get less mutations and get a few generic animal or plant-based powers to make up for it. The rules don't distinguish between tree-people and vine-people, or between dog-people and beetle-people, which I found a bit of a let-down. Still, all those random rolls will leave you with some memorably bizarre characters, as I discovered when I rolled up one of each as a test:


This is all good fun, although of the three of them, poor Manimal Mike clearly drew the short straw; but post-apocalyptic RPGs which let you generate weird mutant PCs are nothing new, and the robots-and-mutants-and-animal-people setting implied by MCC is pretty much the default average for the genre. There are some nice ideas in the monsters chapter - I'll probably steal the Beast Things, degenerate humans who remained in their doomed blue cities until they devolved into ape-like beasts with telepathic mastery over rats, and the Gopher-Men, semi-sentient mutants with steel claws who hoard shiny objects within their subterranean burrows - but, again, it's all fairly traditional post-apocalyptic gonzo stuff. (Its take on the ubiquitous radiation zombies is pretty good, though.) It's all solidly done, but it's probably not going to blow the mind of anyone who's already familiar with Metamorphosis Alpha, Gamma World or Mutant Future.

I thought that the best bit of the book was the chapter on the AI 'gods'. 'The god of the post-apocalyptic tribe turns out to be an ancient computer' is a well-worn cliche at this point, but I don't think I've ever seen it used with as much thoroughness as it is here: so their god of war is an ancient military computer which controls a variety of space-based superweapons, their nature goddess is a sentient weather control satellite, their god of travel is the AI which once ran a worldwide maglev transport and delivery network, and so on. A shaman bonds with their 'deity' by connecting the relevant cyberware to their brain, receiving seemingly-supernatural assistance (and increasingly extensive physical modifications) from their patrons in exchange for serving the agendas of these various crazy machines. The chapter really takes the whole 'your magic is just highly advanced technology' idea and runs with it: the supernatural warriors you 'summon' are warbots teleported in from ancient subterranean storage facilities, your 'divinations' are information downloads from an extraterrestrial computer, the impossible knowledge you find yourself possessing is due to your patron AI using your brain as backup data storage space, the image of your god who appears before you is actually being projected through your retina by a holographic projector embedded inside your brain, and so on. My single favourite example of this was the bit about their goddess of dreams and madness actually being a leftover VR entertainment system, who keeps trying to encourage her adherents to try out her 3D holo-games - experiences which they, understandably, interpret as baffling vision-quests and visits to the spirit world. For players really willing to get into the spirit of the whole 'low-tech observer of high-tech phenomena' set-up, I think this could be really good fun. 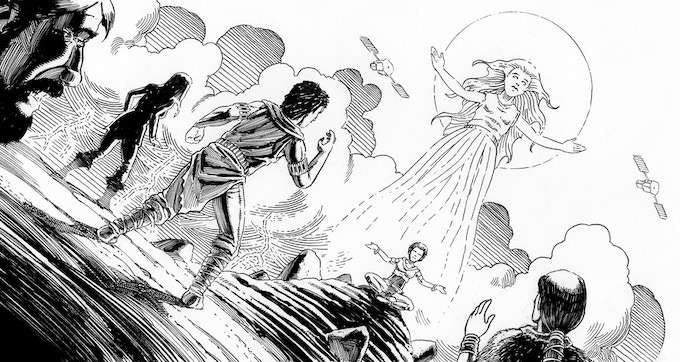 Overall, I'd say that if you're in the market for an OSR-adjacent post-apocalyptic RPG, then this is a pretty good one. If, like me, you're primarily looking for stuff to swipe for other games rather than a whole new system, then you I'd suggest just reading the gods and monsters chapters, and then flicking through the rest of the book for the sake of the art.

Because the art is fabulous. I mean, who wouldn't want their RPG party to look like this?

Email ThisBlogThis!Share to TwitterShare to FacebookShare to Pinterest
Labels: Almost a review, Art