We dance for the spirits and yet they are not appeased.

These are Tsam dancers. 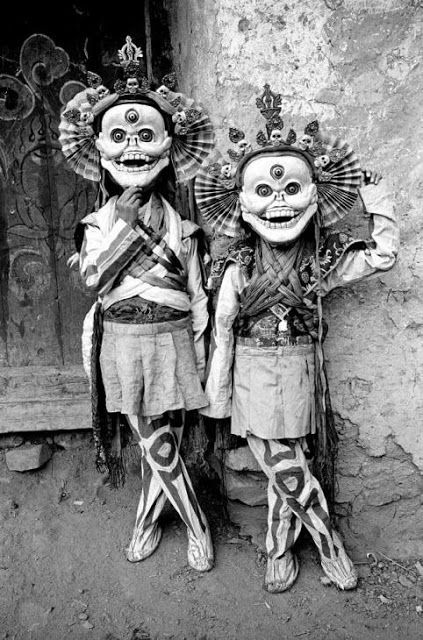 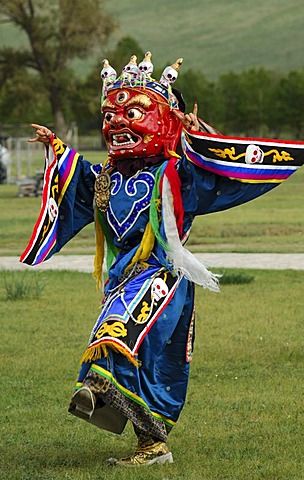 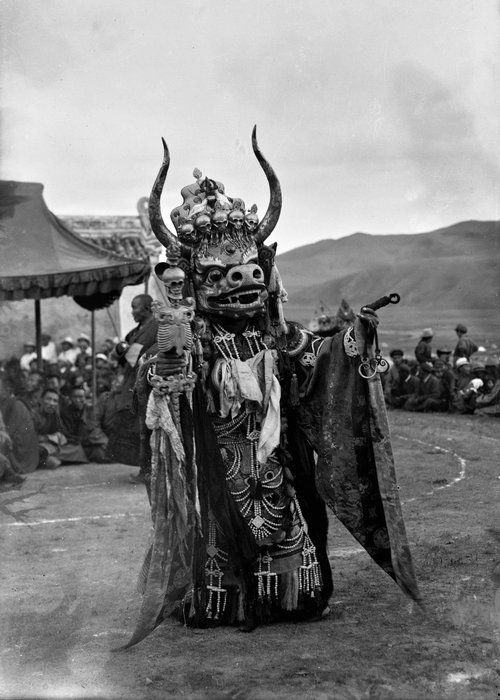 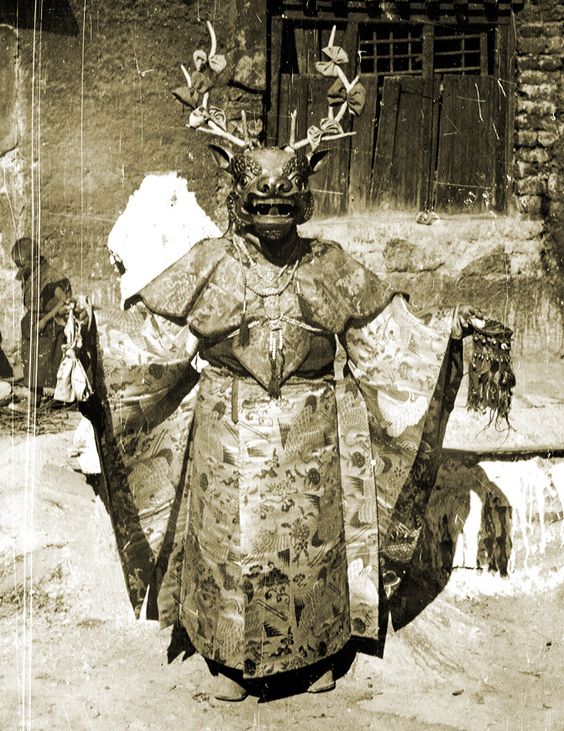 The Tsam or Cham ceremony is a ritual of Tibetan origin, in which masked performers enact symbolic dances in order to spiritually purify themselves and the surrounding environment. Like much of Tibetan Buddhism, it bears a strong resemblance to the indigenous shamanic traditions which were incorporated into local Buddhist practise: and it may have been this shamanic heritage which helped it to catch on in Mongolia, where Buddhist monks began performing Tsam dances of their own in the eighteenth century. To a population familiar with Tegriist shamanism, with its use of ritual masks and dances, it probably seemed logical that Buddhist clergy might also achieve their spiritual objectives by putting on masks and dancing: and the Mongolian Tsam rituals quickly became even more elaborate than their Tibetan originals.

The setting of ATWC is mostly pegged to the seventeenth century, which is before the flowering of Mongolian Tsam traditions: and in any case, I'm extremely wary of turning real religious ceremonies into gaming fodder. Still, I like the idea of the having something similar to the Tsam ritual - let's call it the Great Spirit Dance - as an exciting new ceremonial technique, knowledge of which is just starting to filter into the steppe khanates from some half-legendary mountain kingdom in the south. For the steppe peoples, the Great Spirit Dance is still something daring and experimental and dangerously foreign, which many people have heard of but which very few actually know how to carry out. As such, the performance of such dances is only likely to be attempted by the truly adventurous - or the truly desperate.

Here's how it's supposed to work: through ritual supplications, powerful spirits are drawn down into the masks, which become their temporary homes. The ritualists then don the masks and perform their ceremonial dances, symbolically enacting the cosmic order of the universe. The spirits inhabiting the dancers are reminded of their place within the cosmic system, and at the end of the dance they depart from the bodies of the ritualists in a state of harmonious contentment, meaning that the chances of them deciding to unleash plagues and famines and other disasters upon the people will be drastically reduced in the year to come. They might still do those things, of course: but if they do, it's likely to be because they have a good reason for it, rather than just because they woke up feeling spiteful that day. 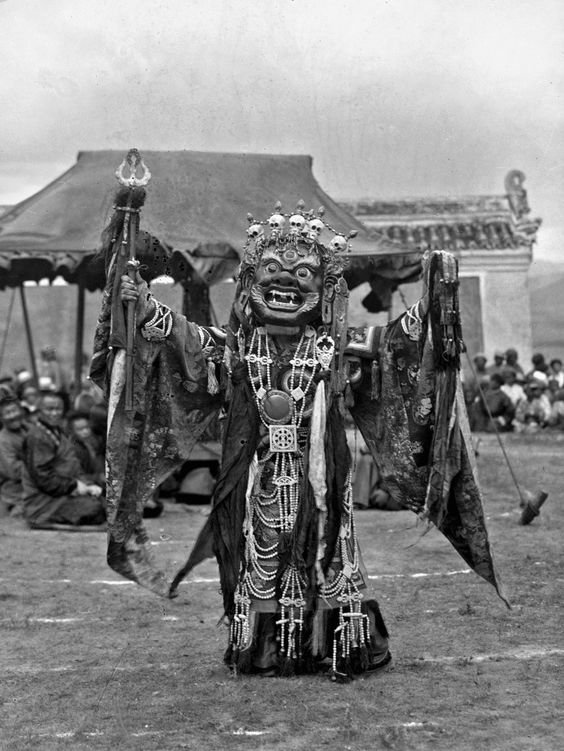 Here's the harmless way to get it wrong: if you mess up the construction of the masks, or the initial ritual preparations, the spirits won't be called down into the performers. You can still do the dances, and if your human audience is paying attention to the symbolism they might even learn some useful religious lessons - but the spirits won't be influenced, because the spirits won't have turned up. As a result, they'll be no more or less likely to send a murrain on your cattle than they would be in any other year.

Here's the really dangerous way to get it wrong: if you get the ritual masks and preparations right, but then mess up the dance, then the spirits will arrive... but they won't leave. You've called them here, into your masks and your bodies, and you're dancing for them... but the dance isn't telling them anything, or at least not anything that makes proper sense. They get confused. They get frustrated. They won't let you stop dancing. They won't let you take the mask off. They want you to do it right.

Thus it sometimes happens that travellers on the steppe chance across a ragged band of dancers, arrayed in the tattered remains of once-fantastical costumes, leaping and stomping their way across the empty lands. Their huge, heavy masks sway and nod to the beat of inaudible music, and through their open mouths can be glimpsed the wild eyes of the dancers, spirit-ridden, gleaming, and crazed. They move in great wheeling circles, their feet tracing intricate mandalas across the featureless grasslands of the steppe. They never eat. They never sleep. They never stop. 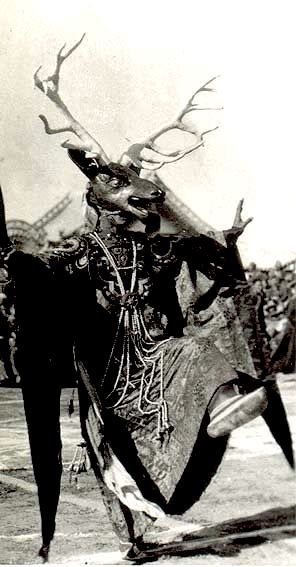 It's best to avoid them, which is easily done on horseback: they move faster than any man, but never in straight lines, so a horse will always outdistance them over time. But if they come upon you by surprise - if they burst upon your camp during the night, for example, for their dance continues in darkness just as it does in light - then almost anything could happen. To determine the disposition of the spirits, roll 1d6:

PCs confronted with such possessed individuals may try to free them by pulling their masks off, but these unfortunates are not so easily saved: while the spirit rides them, the mask is effectively their actual head, and cannot be removed by any means short of amputation. (The exception is if the spirits themselves will it - see 3, above.) Aside from killing them, there is only one way to end their possession, which is to identify what is wrong with their dance and then demonstrate to them how it should actually be completed: if this is accomplished, then the spirits will be satisfied and depart, and their hosts may yet be saved with the aid of prompt medical attention. (They will remember their possession only as a blurred and interminable dream.) For anyone other than a Spirit Dance expert, understanding the flaw in the dance's symbolism requires a 1d6 x 10 minutes of close observation, a specialised religious education, and successful Intelligence check; demonstrating what the correct version should look like requires a great sense of rhythm, 3d6 minutes of dancing, and a successful Dexterity check. Both are likely to be challenging under combat conditions. 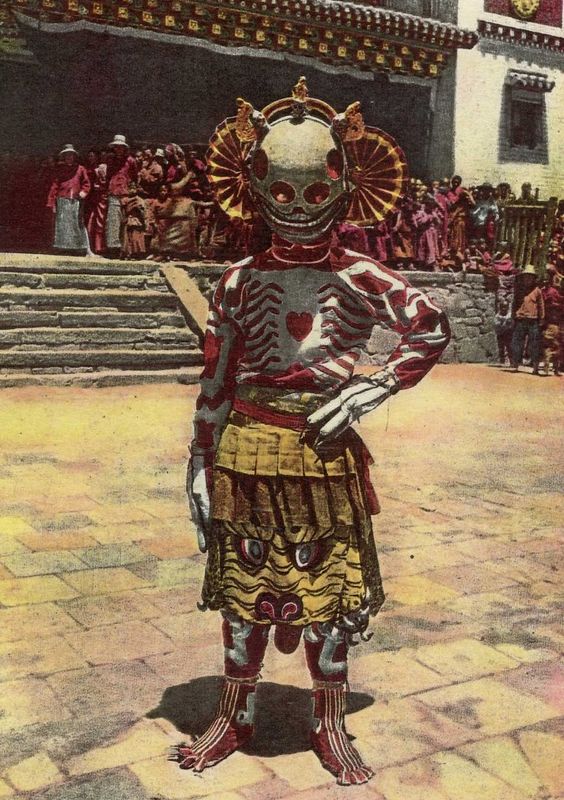