Their Name is Legion: Team Tsathogga move into the monster-making business

One day, long after the adventures of Team Tsathogga have been forgotten, a dusty case in some as-yet-unbuilt museum on their world will preserve as its most prized possession a human skull, stained with old blood and enscribed with ancient runes, with a severed and mummified human hand folded inside its cranium. A nearby plaque will inform the curious that the engraved skull is that of Anthrax the Destroyer, and that the hand once belonged to his killer, Judacus the Betrayer, and that the relics of these legendary heroes of the ancient world must never be parted, lest doom and destruction fall upon all nearby.

It will all be lies.

The relics are fakes.

There were no such people as Anthrax the Destroyer or Judacus the Betrayer.

Team Tsathogga made the whole thing up as part of a demented plan to steal a magic bomb.

I don't even know where to start describing what Team Tsathogga have been up to since they left Qelong. The whole 'Anthrax and Judacus' scenario was so bizarre and convoluted and ultimately pointless that I'm really not sure I can do it justice. The short version is that they created a fake relic, complete with a fake legend and a fake haunting, as part of an over-complicated plan to gain access to a sealed laboratory and steal an orb full of evil magic: exactly what they would do with this orb once they had it was never really settled, although some of the PCs tapped into their inner Bond villains and suggested using it to hold a city to ransom for ONE MILLION GOLD PIECES. However, their efforts led the sorcerer who owned the orb to call in his mercenary soldiers to defend it, leaving his half-built castle nearly undefended: so the PCs promptly gave up on the whole 'fake haunting' plot, rode off to the castle, and stole all his castle-building money instead. Then they ran away.

Knowing that the mercenaries would be hunting for them, the PCs fled to the one place they knew they would never be followed: the goblin warrens beneath Bright Meadows, whose inhabitants worshipped Circe as the prophet of the Frog God. On her last visit to the warrens, Circe had ordered the goblins to start breeding maggots, with the vague intention of using them as a living weapon against the Science Fungoids: her reasoning was that maggots ate both mushrooms and dead flesh, so they would probably be eager to devour the spore zombies of the Fungoids. In the intervening year, the Maggot Trench in the goblin warrens had grown to monstrous proportions: and when they heard from their friends among the toad-folk that the Science Fungoids had become more oppressive than ever as their mysterious 'great project' neared completion, the PCs decided it was time to put their maggot-based war machine into action. All would be well, they reassured the toad-folk. They had a terrible bioweapon on their side, which would devour the minions of the Science Fungoids. It had many mouths. It was always hungry. Its name was Legion.

It was a trench full of maggots.

Quite aside from the rather underwhelming nature of their 'secret weapon', there were serious logistical problems involved in deploying it. The Toad Folk and the Science Fungoids were separated from the goblin warrens by a miles-wide underground lake: how could the maggot swarm be carried across? Once they were over the water, how could they be herded in the right direction, through miles of tunnels, into the mushroom forests of the Science Fungoids? A delivery system was needed. And, after some careful thought, the PCs found one.

Their logic went like this: Preserve Corpse spells obviously prevented corpses from being eaten by insects, otherwise there would soon be nothing left of them. So preserved, animated zombies could be hollowed out and filled with maggots, safe in the knowledge that they would not be eaten by their passengers. The goblins ate their dead, which meant they didn't have a supply of corpses to hand, but the nearby spawning grounds of the vampire toads offered more promising pickings: the needle-fanged vampire toads sacred to Tsathogga simply drank the blood of those who perished, rather than consuming their flesh, and the presence of those same vampire toads meant that other would-be scavengers had a hard time getting access to the bodies of the dead. With the aid of the goblins, the PCs retrieved the waterlogged bodies of dozens of large vampire toads, dried them out, cast Preserve Corpse on them, and had their necromancer buddy Titus animate them as zombies. Then they filled them with as many maggots as they could contain and commanded them to swim across the lake, ready to engage the forces of the Science Fungoids, with orders to vomit maggots onto every fungus-creature or spore-zombie that came within range. Thus reinforced, the PCs set off for the mushroom forests, keen to put their new weapons technology to the test. 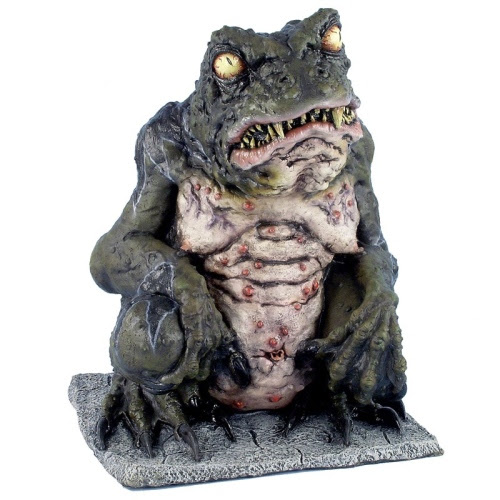 Their name is Legion.
Posted by Joseph Manola at 04:19