Horse-hair and pine-needles spill from their frozen hearts

The other thing I managed to do over the Christmas vacation, aside from playing intermittently-disturbing games with my three-year-old son, was visiting the Scythians exhibition at the British Museum. Most of the items on display barely ever leave Russia, so it was an opportunity I really didn't want to miss.

One thing I learned from the exhibition was that many of the most famous examples of Scythian art were found in what was essentially a tomb-robbing gold rush in the late seventeenth and early eighteenth centuries. Buried in the frozen earth of the Altai mountains, many Scythian kings and chieftains had been preserved by the ice, along with all their grave goods, for millennia - until the locals discovered, by chance, that there were hauls of ancient gold buried up in the hills, some of which found its way back to the court of Peter the Great. Believing that the only proper place for such rarities was in his new cabinet of curiosities (which would one day form the basis of the original Hermitage collection), the tsar sent out archaeological expeditions to search for more of these ancient tombs, along with decrees that anyone finding Scythian gold would be richly rewarded if they handed it over to the tsar, and harshly punished if they attempted to keep it for themselves. Soon the golden treasures of the long-dead kings of Scythia were flowing north to St Petersburg, where they have largely remained ever since. 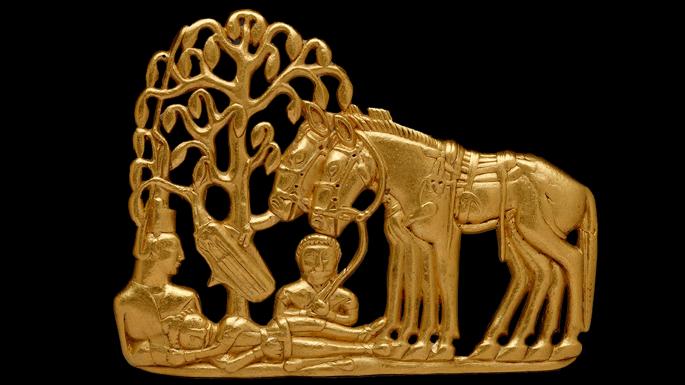 Lost tombs in the wilderness... preserved corpses... ancient treasures from forgotten civilisations... the whole set-up is absurdly D&D-friendly. The fact that it began at almost the exact historical moment that the ATWC setting is pegged to is just a gratuitous bonus.

So: for the last few years, there's been a new rumour travelling up and down the Great Road. They say that the distant Western Emperor, the ruler of all those hairy foreigners with guns who are currently carving up the taiga, has gone mad: that someone brought him a beautiful gold carving from some long-lost tomb, and he fell in love with it, and swore that he would not rest until he had gathered together all such treasures that still exist upon the earth. They say that he thinks of little else, now; that he sits all night long in his treasury, caressing the ancient faces of his golden stags and tigers and monsters, and dreaming of what new acquisitions his messengers may even now be carrying back to him across the endless steppe. Anyone who owns such items and is willing to sell them to the Western Emperor's agents can make a quick fortune. Anyone who owns such items and refuses to sell them is likely to suffer either a very precisely-targeted robbery or a premature death.


Who were they, these ancient goldsmiths, whose skillful workmanship has so bewitched the mind of the emperor, thousands of years after their own deaths? No-one knows: the steppe has devoured them, along with their name and their language and their history, just as it has so many peoples before and since. They lived long before the Wolf Khans, and left no script to be decoded: only scratched pictures of horses and chariots, and carved stone men standing in endless vigils on hillsides, with three diagonal lines cut where their faces should have been. Those who have seen the bodies which lie within their icy tombs call them the Frozen Ones, or the Tattooed Folk, or the Pale Riders. But there are few who can truthfully claim to have seen such sights - and fewer still who like to talk about it.

They built their tombs in the frozen earth, high up in the mountains; and there the ice has preserved them, age after age. Imagine a row of sturdy log cabins, lowered into pits, covered with mounds of earth, and left to freeze: that's what their royal tombs are like. Within lie the bodies of men, women, and horses, their skin dried and frozen into icy leather, their weapons and clothes and harness still intact despite the passage of so many centuries - but cold, all of it, so deathly, deathly cold. Sometimes the corpses are just corpses, and any daring hand can loot them, plundering all their valuables - their golden buckles and armbands, their bowls and brooches and earrings, and all those other precious things of which the Western Emperor dreams. Sometimes even their beautiful beaded clothes can be stripped from them, revealing the fantastical tattoos on their bare and frozen limbs, and their long-dead wearers will simply loll, and crack, and not resist. Sometimes a fortune in old gold can be pulled from the earth with almost no risk at all.

Sometimes. But sometimes not.

For sometimes they rise, these old ones, these pale riders. Sometimes they lift their ancient war-picks in anger against the intruders in their tombs. Sometimes would-be looters will find themselves impaled by volleys of millennia-old arrows, launched out of the subterranean darkness by icy fingers which have forgotten how to miss. Sometimes the adventurer who reaches down to take a golden buckle from some withered corpse will find their arms suddenly grasped by a dead man's hand. They never speak, these frozen guardians. If their bodies are cut open, horse-hair and pine-needles spill from their wounds instead of blood.

Here is a secret that no-one knows yet: the bizarre creatures depicted in the gold jewellery of the Pale Riders were not mythical or imaginary, but real monsters of the ancient steppe and taiga, which their heroes hunted to extinction in the dim and distant past. The preserved and frozen corpses of a few of them still stand in certain undiscovered tombs, buried as trophies with the great hunters who slew them. Such a specimen would be worth a fortune to any scholar or collector; but their mighty spirits do not rest easy, and if taken from the tombs of the mighty men and women who defeated them in life, their bodies are liable to reanimate as soon as they feel the wind and sun once more upon their faces.

Here is a another secret which no-one knows yet: although the Western Emperor isn't nearly as mad as the rumours claim, he is becoming increasingly obsessed with his collection, and his obsession is not an accident. The gold really is calling to him, calling in a voice that feels like snow and smells like hemp and horses. The more of these ancient treasures he brings together, the louder the voice becomes. He feels he can almost understand it, now. He can almost make out the words.

Leathery, pale-skinned corpses with tattooed limbs, these ancient warriors defend their tombs using the antique war-picks they were buried with: these weapons are fragile with age, however, and will break on an attack roll of 1 or 2. In life they were expert archers, but there is simply no way to preserve a compound bow for two thousand years in a useable state, so they have to rely on melee weapons instead. If anyone intrudes into their tomb carrying a bow, their first priority will be to kill that person and take it. A Pale Rider corpse with a functional bow shoots with AB +5 and +2 damage.

These bizarre creatures resemble odd combinations of features from elk, wolves, lions, tigers, and predatory birds. One might have a lion's body, an eagle's head, and feet ending in hooves; another might have the body of a tiger, a wolf's muzzle, spreading many-tined antlers, and a lashing tail that ends in a snapping bird's head. All are huge and savage. They de-animate at once if the corpse of the hunter who originally killed them is brought into their presence, or if they can no longer feel the sun and wind on their skin.

The Ice Maiden loved worked gold more than anything else, so much so that when she died a fraction of her spirit passed into each of the golden treasures that she loved the most, which were then divided among the various kings and chieftains of the Tattooed Folk. Once more than three of these are gathered together in any one place, their owner will begin to feel a nagging desire to own more; this desire will grow stronger the more such treasures are brought together, gradually reaching the level of an obsession. Once half of them have been collected, she will be able to manifest herself at will as an 5 HD spirit. Once all of them have been assembled, she can manifest at 10 HD, instead.

The Ice Maiden manifests as the ghostly figure of a woman in a high conical hat, her arms and legs covered in fantastical tattoos of taiga animals being devoured by predatory beasts and monsters. If she wills it these beasts can spring to life, uncoiling themselves from her limbs and dilating into full-size predators within seconds: each round, in lieu of attacking, she can summon one such creature, up to a maximum of four. These have the statistics of the Monsters of the Ancient Taiga, above, but they cannot act in the round in which they are summoned. They vanish instantly if she is defeated.

Once manifested, her first objective will be to regather all her original treasures, and her second will be to start hoarding together as much gold as possible. She will find modern cities extremely confusing, however, and if she manifests in such a city - the capital of the Western Emperor, for example - she will venture forth only at night, when it's quiet and there aren't too many people around. She speaks only her own long-extinct language, but is capable of basic telepathic communication with whoever owns her treasures, and can also be contacted like any other spirit through the use of shamanic trance rituals.

Killing the Ice Maiden banishes her for 1d100 days, but she will always return as long as her treasure collection is intact. The only ways to permanently get rid of her are to break up the collection, destroy more than half the treasures, or get every surviving treasure blessed by a man or woman of great holiness (which sends her spirit on to the afterlife). Alternatively, if all her treasures were taken to one place and buried, she would become a spirit of the land, who could be contacted and bargained with by shamans like any other. Her favour would bestow skill in metalwork, prowess in hunting, and resistance to cold, but - unsurprisingly - she would demand offerings of gold in return.