More encounters from the City of Spires: the uplands

Second in a series of three 1d10 encounter tables, one for each of the three biomes that my PCs have been most active in recently. This post covers the uplands. Feel free to roll on them next time you need to stock a random hex! 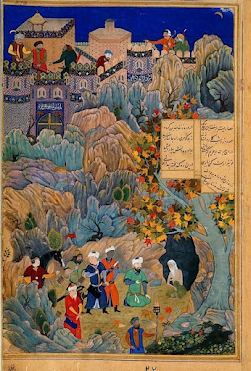 8: Half of an ancient castle clings to a mountainside, here - the other half lies smeared and tumbled across the slope below, having been toppled in an earthquake centuries before. Once the seat of some ancient tyrant, it is now the home of an exiled magician, banished from her homeland for dealings with unholy beings who promised her knowledge and power - an opportunity whose loss she still very much regrets. Since taking up residence here she's managed to refurbish the flying stone skull-throne that belonged to the castle's original owner, an airbourne symbol of power and terror that has allowed her to convince the inhabitants of the surrounding villages that she's a terrible witch whose wrath must be placated with offerings of food, herbs, and flowers. Although amoral in the pursuit of knowledge, she's otherwise a decent enough sort, and far from the fearful hag the villagers imagine her to be, even if her years of living in isolation are making her increasingly eccentric...

9: Long ago, this mountain was partially hollowed out by a now-fallen empire as the resting place of its most honoured dead. Whole sections of the complex have collapsed over the centuries: what remains is accessible only by clambering through ancient elevator shafts, and is still defended by zomborg guardians, who stand watch over endless rows of ancient, embalmed corpses in broken glass cases. Few were buried with much treasure, but the halls are an antiquarian's paradise, and the cumulative value of all those rings and earrings and belt buckles is considerable. In the uppermost part of the complex the embalmers themselves still rest in cryosleep, though various freezer malfunctions over the centuries has turned their brains to mush: if revived they will mostly come lurching from their chambers crazed and screaming, some of them brandishing still-dangerous cybernetic limbs. Only one of them, an apprentice embalmer wearing a protective amulet gifted to him by his sorcerer uncle, is really reviveable alive and sane, though he will be utterly distressed to learn that his civilisation has fallen while he slept.
10: Beneath this mountain lies a great vault, built to contain the egg of the Great Worm. At some point after the fall of the civilisation that built it, the egg hatched, giving birth to a vast, blind worm-god crawling endlessly around its prison. At some point after that a band of luckless refugees chose the wrong cave in which to seek shelter, and ended up being converted into worm cultists by the psychic radiation of the monster-god below. Now they and their worm-man followers labour endlessly to dig their way through the innumerable tons of rubble that lie between them and their buried god: already they have dug close enough that anyone descending into the lower workings will be enveloped in the dreams of the Great Worm, a hallucinatory dream-world of alien jungles that the Worm recalls through ancestral memory, but has never actually seen. The cultists have unearthed many relics of the ancient world in the course of their excavations, and will eagerly trade these for sturdy pickaxes and shovels if the opportunity arises. Vulnerable travellers who are unable or unwilling to hook them up with good shovel suppliers will be abducted and dragged down below instead, where the Great Worm's psychic radiation will progressively transform them into worm cultists as well.
Posted by Joseph Manola at 02:24