I recently read a book called Mummies, Cannibals, and Vampires, by Richard Sugg. Despite its title, it's not about monsters. Instead, it's a history of what Sugg calls 'corpse medicine' - the early modern practise of using bits of dead people in attempts to cure the living. Sugg can be a bit credulous in places, but he does a good job of establishing that human blood, fat, and bone saw fairly widespread use in both European folk remedies and 'academic' medicine during the period, giving rise to a range of often gruesome medical practises that, in some cases, lingered on as late as the nineteenth century.

Here are the most gameable bits. 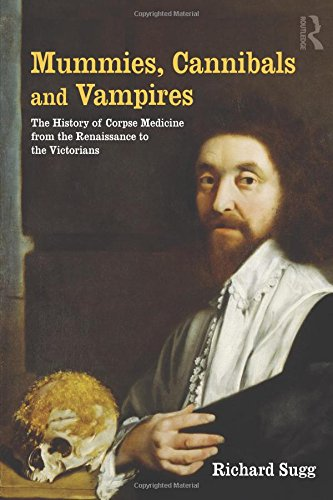 Skull Moss: The theory went like this: during life, your brain is constantly sloshing around inside your skull, marinading the bone in brain juice (AKA 'vital spirits'). So after you die, some of the life-giving power of your brain juice should logically still inhere in your skull. You could just grind up a skull and use the resulting powder as medicine, and indeed many people seem to have done exactly that. But the best way to get the power out is to take a human skull and grow moss on it, preferably by moonlight or starlight. The moss sucks the power of the vital spirits out of the skull, and you can then powder and eat the moss as a remedy.

Strangulation boosts skull quality: If someone dies by hanging or strangling, then at the moment of their death their life force will obviously be trapped inside their head, unable to escape down into their lungs. This means they will die with a head full of super-charged brain juice, making their skull (and any skull moss subsequently grown on it) extra-potent for medical purposes. There was consequently a brisk trade in the skulls of the hanged.

Subdermal talismans: One particularly hardcore early modern soldier apparently wore a lump of skull moss under the skin of his own head, presumably by cutting a flap of skin off his forehead, pushing the moss under it, and then sewing up the wound and letting it heal. Probably the intention was to fortify his own skull with a double-dose of life-giving brain-juice. Apparently it worked, too, protecting him against being injured by sword-blows to the head. 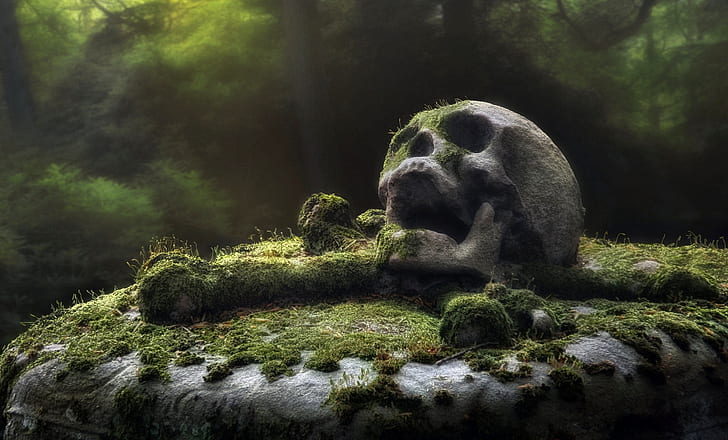 Wound salve: According to the early modern doctrine of sympathy, a connection existed between a wound and the weapon that caused it. Rubbing a 'wound salve' made of human blood, fat, and skull moss on a bloodstained weapon would make the wounds caused with it heal, no matter how remote the victim might be.
Plot seeds:
A cure for bad blood: To reconcile enemies, take blood from both of them and mix it with fertile soil, then grow herbs from the soil and feed the herbs to both enemies. This mixing of their life forces will soften the enmity between them.
Plot seeds:
Blood lamps: Take a lamp, fill it with human blood drawn from one person, and then light it. The light from the lamp will reflect their condition - if it burns clear and bright they're probably OK, but if the flame wavers it means they're troubled, and if it goes out suddenly for no reason it means they've died. Presumably the lamp required periodic blood top-ups to renew its connection.
Plot seeds:

Dead man's hand: One seventeenth-century doctor recommended treating piles and swellings with the sweat of a dying man. This was obviously a pretty time-limited resource - if he's genuinely dying, you've only got so long before he tips over into being dead - but luckily, there was an alternative: you could rub them better with a dead man's hand! (Presumably he had a preserved one that he used for this purpose? I imagine it mounted on a stick for easier rubbing...)
Plot seeds:
The executioner's other trade: Each human body was believed to possess a certain allocation of life force, which leaked away through age and sickness - thus the bodies of young people (especially healthy young men) who died suddenly by violence were held to possess great power, as so much unspent life force remained bottled up within them. Many early modern executioners thus carried on a thriving trade in the blood, bones, skin, and fat of their victims, all of which were believed to possess healing properties and even to be able to ward off black magic due to the life force with which they were charged. The fresher these body parts were, the better - people desperate for cures would sometimes come to beheadings with cups, ready catch and drink the victim's blood right at the foot of the scaffold.
Plot seeds: 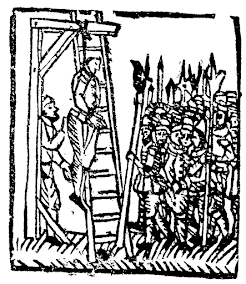 Blood against age: Drinking the blood of the young and healthy was thought to grant strength to the old and infirm. Normally the 'donor' was paid, though rumours circulated that some rulers had young victims abducted and murdered for the sake of their life-giving blood.
In-game uses:
A cure for flatulence: Tired of farting at inconvenient times? Try wearing gloves made of human skin! For some reason they're good for the joints, as well!
(We can only hope that not too many people tried putting this one into practise, although the idea of human leather doesn't seem to have disturbed our ancestors as much as one might expect. Books continued to be intermittently bound in human skin well into the nineteenth century.)
Plot seeds:
Mummy: The crushed flesh of Ancient Egyptian mummies was believed to have many healing properties - so much so that demand for it soon outstripped supply. Egyptian corpse-merchants made up the shortfall first by substituting 'natural' mummies (the dried-out corpses of travellers killed in desert sandstorms) for the ancient kind, and then by just buying up as many bodies as they could, drying them out in giant ovens, and exporting them as 'mummies'. Paracelsian medicine maintained you could make a home-grown version just as good as an ancient one by taking the freshly-killed body of a young man who died by violence, leaving it out overnight, cutting it into strips, and macerating it in wine. So as well as moss-covered skulls, dead men's hands, human-skin gloves, crushed-up mummies, and pastes made from human blood and fat, the workshops of early modern doctors may also have contained shredded corpses in wine. For, y'know, medical reasons.
Plot seeds:
The Black Doctors: Suspicion of the medical profession seems to have run deep in rural Scotland. There parents would warn their children of 'the Black Doctors', medical murderers who lurked around looking for potential victims. When they spotted a likely target they'd sneak up behind them and slap a black adhesive patch over their nose and mouth, suffocating them and preventing them from calling out, then drag them off to make healing broth from their bodies and bones. (Very similar stories circulated in early Victorian London, where medical murder-gangs were rumoured to garrote pedestrians and throw their bodies down through hidden hatches into ever-boiling cauldrons in the tunnels below.)
Plot seeds: 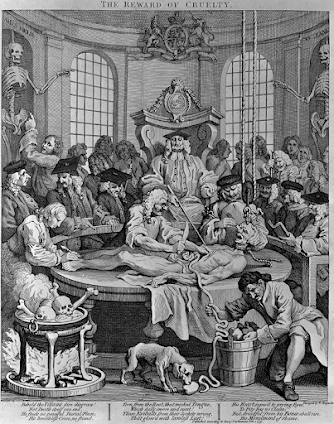