Clockwork tech, continued. This is the sort of stuff you might see in larger cities. No-one except a mechanic would take it into more rural areas, because if it broke down out there none of the locals would have the tools or expertise to repair it.

All of this stuff is very expensive.


Clockroach: These clockwork pests are used by the Brass Folk to punish communities which cheat or mistreat them; the Brass Men seem to endure their ill-treatment patiently, but the next night they will depart and leave a swarm of clockroaches in their wake. Each is a fist-sized metal insect with sharp, cutting jaws, dexterous little claws, and folding metal wings which let them fly, whirring, through the air. By day they scuttle into holes and raise small hidden fans: whenever the wind blows, the fans turn, winding the clockroach's main spring. By night, if they have enough power, they scuttle out looking for any kind of metal, which they cut into pieces with their jaws and assemble into more clockroaches. They are not difficult to destroy (AC 14, 1 HP), but no metal object will be safe nearby for as long as even one survives.

Medium Tank (4-man): A long, lumbering metal coffin of a machine, 6' wide and 10' long, clanking along on two rows of wheels, and usually with a couple of swivel guns mounted on the roof. The crew is one driver, two gunners, and one engineer. Its heavy armour plating will need a cannon to penetrate; the gunners only have their heads and upper bodies protruding above the roof, granting them +4 AC from cover. The bad news is that it's hot, slow, useless on uneven ground, eats coal by the bucketful, and breaks down constantly. More often used as a semi-mobile fortified gun emplacement than as an actual vehicle. If you run out of coal, the four cranks must be turned for three hours each to allow it to run for an hour.

Brass Man (Body): This is the difficulty of making a whole new body for a Brass Man which has suffered extensive damage. (Individual arms and legs use the clockwork limb difficulties.) Useless without a clockwork brain. Some particularly brave or accident-prone brass men have been through ten or twelve different bodies in their lifetimes, their companions salvaging their armoured brain-case from the wreckage of each in turn and implanting it into a new body as required.

Large Yaga: A walking metal box, 15' on a side and subdivided internally into two levels, stomping along on enormous 10' clockwork legs. This is about as large as yagas get; at this size, a whole family can live in one, with their worldly goods either stashed within or tied in bales to the outside. Often have a swivel gun or a cannon mounted on the roof. The thick metal walls are proof against musket-fire, but a swivel gun has a 50% chance of penetrating and a cannon certainly will. The legs (each AC 16, 30 HP, immune to missile weapons smaller than a swivel gun) are still the most vulnerable part. Fuel requirements make it totally impractical to wind by hand. Don't run out of fuel.


Steam Knight Armour: An enormously bulky suit of heavy armour, far too heavy for anyone to wear and move in unaided. (Someone with Strength 18 could slowly creak around in it.) Its movements are assisted by a powerful clockwork mechanism, which allow even someone of normal strength to wear it provided they understand how to operate its fairly complex controls. Wearing Steam Knight armour gives the wearer an effective Strength of 20 (+5 melee to-hit and damage), AC 20, and immunity to missile weapons smaller than a swivel gun, but it is very slow: they cannot move faster than a walking pace, and can fight only with huge, clumsy swings, which impose a -5 penalty on melee and ranged to-hit rolls. (The strength of the suit makes up for this in melee.) Reloading guns takes twice as long as usual due to the clumsiness of the amour's fingers, and bows cannot be used at all: they'd just snap in your hands. Most Steam Knights carry swivel guns, relying on the weight of their armour to soak up the recoil. Requires one hour's winding (by hand or autowinder) for each hour's use. Actually wearing the armour while the autowinder is running is a good way to get cooked alive.

Clockwork Wings: Folded, these metal-and-leather wings effectively form a very heavy cloak: they provide +3 AC from behind, and count as two items for encumbrance purposes. Unfolded, they have a 12' wingspan, and permit a lightly-burdened human to clumsily flap from place to place. Both hands are necessary to operate the controls. Requires four hours winding (by hand or autowinder) for each hour's use.

Small Mech (1-man): A 10' humanoid walker, operated by a single pilot, who controls one arm with each arm and one leg with each leg. The mech inflicts 1d8+6 melee damage with its enormous fists or 1d12+6 with a huge weapon, but is clumsy enough that it grants no to-hit bonus in melee despite its enormous strength. It could fire a swivel-gun one-handed, at a -6 to-hit penalty, but would have no way of reloading it afterwards. AC 20, 40 HP, immune to missile weapons smaller than a swivel gun. Requires six hours of winding per hour of operation if you run out of coal. 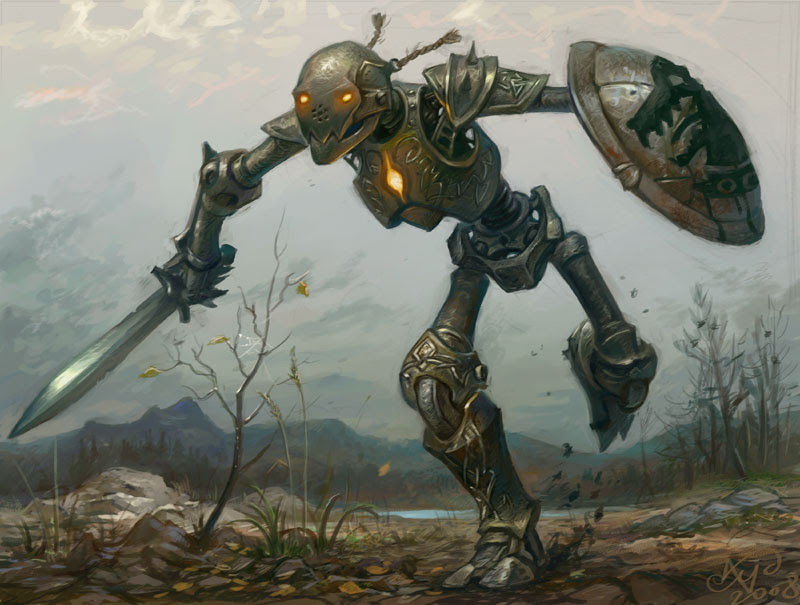 Clockwork Beast or Soldier: These are the simplest 'free-willed' automata, with clockwork brains capable of responding dynamically to a limited range of situations rather than just repeating the same routine over and over again. Possible varieties include clockwork workers (able to perform a limited range of menial tasks on request), clockwork soldiers (able to fire and reload muskets at a designated target - melee is rather beyond them), and clockwork beasts (able to roam around and attack intruders, mauling them with metal claws). They cannot understand language: new orders must be given in code. Winding times and fuel requirements vary based on size.
Posted by Joseph Manola at 01:43