Districts of the Wicked City 1: The King's Tower

There's no point in trying to draw a map of the Wicked City; it's too huge, too sprawling, and anyway the buildings move around when they think that no-one's looking. But it can be divided into six basic zones: the Tower, the Cobweb, the Districts, the Slums, the Rubble, and the Maze. 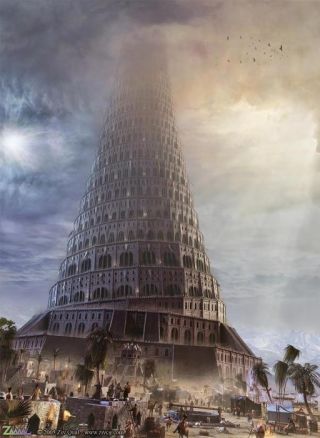 The Tower is the seat of the Wicked King. His worshippers claim it goes all the way up to heaven. Everyone else thinks that's crazy-talk, but it certainly is very, very, very high: one hundred stories at the very least. (It's impossible to count them accurately from the ground.) Anyone with any knowledge of engineering or architecture can tell at a glance that there's no way a structure that tall should be able to stay standing; it should have collapsed under its own weight before the builders got even halfway up. And yet here it stands.

The Tower is the heart of the Wicked City's government. An army of ministers and bureaucrats work there, attended by a second army of servants, and watched over by a third army of soldiers, guards, and secret policemen. Enormous quantities of food are carried in through its front gates every morning. In return, it spits out laws, orders, and the occasional highly-armed death squad with sealed orders and suicide pills in their pockets. As you ascend the Tower, the administrators get more senior, the intrigues get more complex and deadly, and the spies and soldiers get more omnipresent. By the time you reach level ten, the office politics alone are enough to drive you crazy. By the time you reach level twenty, the whole system seems to have collapsed into a maze of mad, feral bureaucrats, their eyes wild with paranoid dread, who will literally murder anyone who comes into their offices without a prior appointment. And there are at least eighty more levels to go after that.

The Wicked King went into the Tower about fifty years ago. He never came out. It is entirely possible he has been dead for decades. Nevertheless, something is up there, passing down orders to the lower levels. Something keeps this whole insane system from totally falling apart. You can ascend through thirty, forty, fifty levels, and in between carving memoranda on each other's skulls the gibbering tribes of arch-administrators will still assure you, looking upwards with expressions of sickly dread, that the boss is up there somewhere. Messengers come down from even higher levels with orders and instructions. People who disobey them are never seen again.

Given that lighter-than-air flight exists in ATWC, smart PCs will want to avoid climbing through one hundred levels of increasing craziness by just flying right to the top of the Tower. Unfortunately, the Tower is absolutely bristling with anti-aircraft defences. On the lower levels you just need to watch out for all the sharpshooting musketeers and cannon emplacements, but higher up things get weird: gargoyles come to life and fly out on stone wings (how?) to attack incoming airships, holes in the walls turn out to contain concealed flamethrowers, weird pale-faced men will throw themselves out of windows onto your ship and start suicidally attempting to sabotage it, screaming incoherently the whole time. Eventually, even the bravest airship captain will get the message. Whatever is up there does not want to be disturbed.

Of course, you can skip at least the first forty levels or so by entering through the Cobweb. But that's a subject for another post.