Denizens of the Wicked City 7: The Blighted and the Adepts of the Diamond Mind (Ultralight rules for psychic PCs!)

Among all the children of men, it was common knowledge that some people were just born unlucky. They possessed freakish, uncontrollable gifts; flashes of insight into the minds of others, random glimpses into the past and future, the curse of the evil eye. There was little that could be done with such individuals; they congregated in the waste grounds on the edge of settlements, consulted by the unhinged and the desperate, as often as not driven mad themselves by the things they had seen and heard. Those with the mental strength to weather their curse sometimes acquired fame as witches, but even they seldom had any but the vaguest control over their powers. These unfortunates were known as the Blighted.


One day, it so happened that an initiate of the Order of the Stone stayed in a Blighted encampment. Impressed by his lack of fear, and by the fortitude with which he weathered the ascetic ordeals of his Order, one of the inhabitants begged him to take her with him as a novice; for she had learned that suffering was unavoidable, and longed only to be able to encounter her ordeals with the same serenity with which she saw him face his own. She served a long and gruelling apprenticeship, made even harder by the curse with which she contended; but she persevered, and as she did so she discovered something remarkable. By adapting the meditative techniques of the Order of the Stone, she was able to develop a methodology for holding her curse at bay, and even bending it to her will; and this methodology she called the Diamond Mind.

Now calling herself the Sage of the Diamond Mind, the woman returned to her old companions and tried to share her wisdom with them. Most of them proved incapable of mustering the necessary mental fortitude and concentration; but a few succeeded, and they became her first disciples. Wandering from land to land, they taught their secrets to others of the Blighted, men and women desperate to be free of their curse; and so the Order of the Diamond Mind was born.

The laws of the Diamond Mind were simple, but extremely rigorous. Mind and body had to be strictly trained; emotions, desires, and fears were all subject to the firmest control. Like the Elemental Orders on whom they modelled themselves, the Disciples of the Diamond Mind lived lives of extreme simplicity, cultivating a state of perfect concentration, shunning stimulants and intoxicants, and ruthlessly suppressing every urge of flesh or spirit which might threaten to lead them astray. Many male Disciples even went so far as to castrate themselves, in order to free themselves from at least some of their bodily desires. For the successful, however, the rewards were rich: not just freedom from the curse of unwanted and incomprehensible knowledge, but the ability to control their powers, seeing into the minds of men and bending the world to their will. Today, almost anyone who is born Blighted will at least attempt to become one of the Disciples of the Diamond Mind, even if less than half of them ultimately succeed; and the Disciples themselves are to be found in many offices of high honour, serving as advisers to kings and magistrates for whom their insights are more valuable than gold. 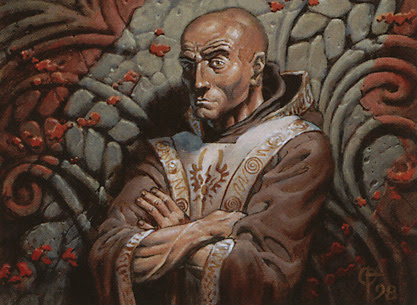 The Curse and the Cure: Being Blighted can happen to anyone, and usually manifests at adolescence. On average about one person in a thousand will be afflicted in this way, although some populations seem to have dramatically higher rates of affliction, for no reason that anyone has been able to adequately explain. As mentioned above, these days the first thing most people do upon realising that they are Blighted is to seek out the nearest Diamond Mind adept and beg for training, so most Blighted individuals that the PCs are likely to encounter will fall into one of three categories: inhabitants of remote areas with no way of getting Diamond Mind training (and possibly no knowledge that it even exists), Blighted adolescents roaming from town to town searching desperately for a Diamond Mind adept to train them, or drop-outs who lacked the self-control to complete their Diamond Mind training and have now resigned themselves to miserable lives on the fringes of civilisation. The third category will mostly consist of characters with Wisdom 9 or lower.

Every Blighted character has a Psychic Instability score, which is rolled on 1d6. (Some exceptionally severely Blighted individuals can have even higher scores, but this is rare.) Whenever a Blighted character experiences fear, anger, or stress, they must pass a WILL save or experience an uncontrollable psychic outburst. (Characters who have had even basic Diamond Mind training receive a +1 bonus to this saving throw. Very extreme emotions or stresses might impose penalties, at the GM's option.) If an outburst occurs, roll 1d6, add their Psychic Instability score, and consult the table below. If a 6 is rolled, then put the dice aside, roll another 1d6, and add this to the total; keep doing this until you either stop rolling sixes or your cumulative total rises to 25 or higher, at which point a Psychic Holocaust occurs and you can stop rolling because everyone's probably dead.

Note that any result of 10 or higher will be attended by phenomena which make it very obvious who is responsible: the Blighted character may bleed from their eyes, levitate off the ground, be surrounded by a miniature telekinetic whirlwind, or similar effects. Catastrophic psychic outbursts, leading to the deaths of one or more people, are often immediately followed by the lynching of the Blighted individual responsible.

Blighted characters are not usually suitable as player characters (unless you want to be very unpopular with the other players, but you may play a Diamond Mind Adept if you wish. Playing one requires Intelligence and Wisdom 12 or higher. Use the following game information: