Another class inspired by my browsing through the Pathfinder SRD. Pathfinder has a Mesmerist class, and like most Pathfinder classes it's enormously fiddly and overcomplicated, full of abilities that let you do one thing to allow someone else to do another thing which, in turn, gives you a bonus to a third thing when someone does something else. Maybe once I could have kept track of all that stuff, but now I'm old and tired and I just want a class which lets you stare at people until they drop down dead.

Fortunately, amongst the many, many areas of obscure knowledge I have accumulated over the course of my life is a bizarrely complete knowledge of eighteenth- and nineteenth-century mesmerism; and, let me tell you, the stuff those guys got up to was easily weird enough for D&D. So here's a new Mesmerist class which is not only simple, but also HISTORICALLY ACCURATE, in the sense that all the things it can do are things which actual historical mesmerists claimed that they could do as well. (Yes, even the really weird ones like 'Eyes in the Belly' and 'Electric Sex'.) Because God knows that the one thing most D&D games need more of is a bunch of pseudo-Victorian hypno-occultists who go around staring at people all the time.

(I am now morbidly curious about what a B/X game would look like if it used Mesmerist, Angel, Inquisitor, and Patchwork Girl as its four core classes...) 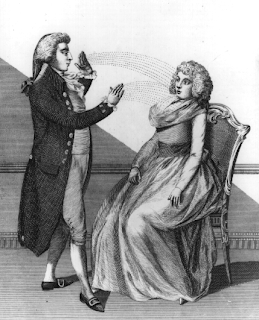 Mesmeric Stare: By staring at someone for one round, you can project waves of MESMERIC FORCE into their bodies and their brains. This ability has a maximum range of 20' plus 5' per level. Your target must make a save or go into a trance state, effectively paralysed by your mesmeric powers for as long as you maintain total concentration. (Of course, if they want to enter a trance state, then they can forgo their save.) If your target takes any damage, or if you take any action other than walking, talking, and staring, this effect immediately ends. Once someone succeeds in a saving throw against your mesmeric stare, you cannot attempt to mesmerise them again for the next 24 hours.


Mesmeric Passes: If you use both hands to make continual waving motions at the target of your Mesmeric Stare, propelling additional waves of MESMERIC FORCE into their bodies, they take a -2 penalty to their saving throw. You can only make Mesmeric Passes if your hands are empty and your arms are unencumbered.

Sonambulism: Once you have placed someone into a trance state using your Mesmeric Stare, you can order them to perform simple physical actions: 'drop your weapon', 'walk forwards', 'unlock the door', and so on. All these actions will be performed very slowly and clumsily, making fine manipulation impossible. (Similarly, if you tell them to attack someone, their blows will be so slow and clumsy that only an immobile target will be in any danger from them.) If you order them to do something harmful to themselves, or repugnant to their beliefs, they may make a new saving throw to break out of the trance; and if they actually take damage, the trance ends immediately.

Iron Will: Whenever you are affected by a mind-affecting supernatural power (e.g. sleep, charm person, fear, etc), you may spend 1 ME to reroll your save (or to make a save, if the power doesn't normally allow one). If you fail, you can try again next round until you either pass your save or run out of ME.

Mesmeric Transfer: By touching a fellow mesmerist, you may transfer any amount of your own Mesmeric Energy to them. If this transfer brings them above their normal maximum level of Mesmeric Energy, the excess must be used immediately or it is lost at a rate of 1 point per round.


Battle of Wills: If you ever try to involuntarily mesmerise another mesmerist, they are instantly aware of your attempt; and, instead of making a saving throw, they may instead choose to engage you in the world's most epic staring contest. Each round, you each roll 1d6 and add your Mesmerist level; the loser loses 1d3 points of Mesmeric Energy. Whoever runs out of Mesmeric Energy first is mesmerised by the winner.

Mesmeric Powers: At level 1, you may select one of the following Mesmeric Powers for your character. Select an additional Power for each subsequent level.

The powers you may choose from are as follows: 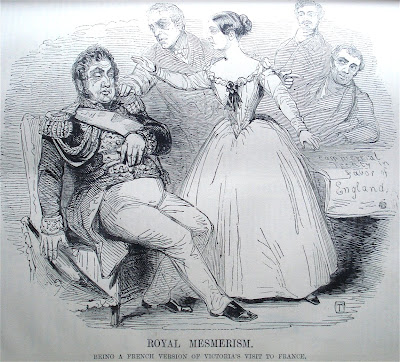