The Island of Cairns

This is Vaygach Island, in the Arctic Ocean. 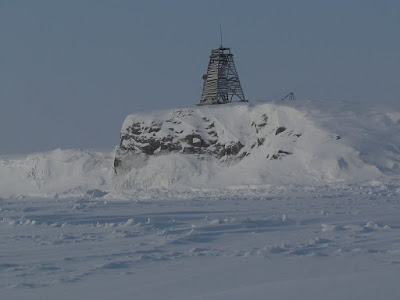 It's about the same size as Long Island in the US, but almost no-one lives there: it's too cold, too bleak, too bare. There are no trees. There is no shelter. Back in the Soviet period, the Russians tried to run a mine there, using conscript labour from the Siberian gulags. It wasn't a success.

Vaygach is regarded as a holy site by the Nenets people of northern Siberia. For centuries, they came here to raise idols and offer up sacrifices to the great spirits, Num and Nga, a dualistic pairing of sky-god and underworld-god comparable to that of Tengri and Erlik further south. They were reindeer herders. They painted the idols with the blood of slaughtered reindeer. They raised piles of stone and wood, Arctic equivalents of the Ovoo cairns of Mongolia, and placed the skulls of the sacrificed reindeer on top of them. Thus the spirits were appeased.


Like most of Siberia's indigenous peoples, the Nenets suffered badly during the twentieth century. The Soviets disapproved of their nomadic lifestyle, and forced them to move with the times: settle in one place, learn Russian, practise collectivised agriculture. Today their southern cousins, the Forest Nenets, are in a very bad way; there are only a couple of thousand of them left, their language is dying out, their songs and traditions have mostly been forgotten. But the tundra Nenets, the ancestral keepers of Vaygach Island, still manage to maintain some kind of continuity with the past.


So: far, far to the north of the Wicked City, beyond the steppe, beyond the taiga, beyond the tundra, there is a frozen sea. In that sea is an island; and on that island are many cairns and no houses, many idols and no trees. The cairns and the idols are maintained by the Reindeer People, who drive their herds across the tundra, but even they don't actually live on it. No-one lives on it. It's too holy for that.

On the Island of Cairns, the world of spirits presses very, very close to the world of men. Here, anyone, even a non-shaman, may communicate with the spirits simply by killing an animal, pouring its blood over an idol, putting its skull on a cairn, and then stating their message or request. Do this, and the spirits will heed you; and if they want to answer you then they will come to meet you in person, stepping out from the shadow of a cairn or an idol in the form of a man, or a woman, or a great wild beast. They seem to regard the island as a kind of antechamber to the spirit world, within which it is proper for them to give due audience to those who come to seek them; and even the most hostile and unreasonable of spirits can usually be counted upon to give its supplicants a decent hearing if invoked amongst the cairns of the frozen sea. They may still refuse to give their aid, or demand completely exorbitant offerings in exchange for their assistance, but at least they'll hear you out.


The Reindeer People say that the spirits are not the only inhabitants of the island. They say that there is a secret race of dwarves, white-skinned and furtive, inhabiting caves beneath the surface; that these dwarves are great magicians who ride across the sea on clouds, singing the fish out of the water and up into their nimble, pale little hands. They say that sometimes, in the depths of winter, huge men like giants come riding across the frozen sea on sleds drawn by great white reindeer without antlers. If you wish to communicate with the dwarves, or with the giants, you must leave offerings for them out on the cairns, and state your message or request with all the courtesy that you can muster. You won't see them, but they will be watching. They will be there.

Magical though they may be, the dwarves and the giants still need to eat, and food is scarce on the shores of the Frozen Sea. Sometimes there are tensions. Sometimes they and the Reindeer People come to blows; and when they do, it's usually the Reindeer People who get the best of it, because unnatural stature and magical powers are no match for having a whole clan of kinsmen backing you up. If you kill a giant or a dwarf, though, it is very, very important that you take their body back to the Island, and build a new cairn over it. Doing anything else invites the most terrible bad luck.

Due to their long-term saturation with the energies of the spirit world, the bones, stones, and wood of the island's cairns and idols possess considerable magical power. The merest pebble from such a cairn, worn threaded on a string around the neck as a good luck charm, is worth a +1 bonus to saving throws; wearing a bear or reindeer skull taken from a cairn as a helmet grants protection from misfortune while travelling, while arrowheads made from the antlers of reindeer skulls placed on such cairns, or from the bones of giants or dwarves buried below them, seem almost never to miss, granting a +4 bonus on to-hit rolls. But to plunder the cairns is to risk the wrath of the spirits. Who would dare commit such impious deeds?

Surely only the agents of the Wicked City...