Romantic Fantasy Revisited 3: How do I use this in a game of D&D? 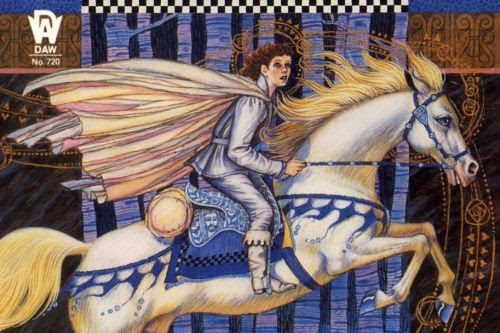 Man, I need to get this series finished. I promised Derek Holland a review of his magic item book!

OK: part three. In my last two posts, I discussed what I mean by 'romantic fantasy' (although Yora has now started calling it 'Hope and Heroism' instead), and why someone might potentially want to emulate it - or at least parts of it - in a game of D&D. In this post, I'll address the next obvious question: how?

Let's say that you and your group are totally up for a romantic-fantasy-themed D&D game, full of redeemable villains and non-violent solutions. How do you make that happen? What do the rules need to do? And why aren't you all just playing Monsterhearts instead?

The biggest burden, as usual, falls on the GM. The GM is the person who establishes what kind of world the game takes place in, after all; and if the world that they present to their players is one that doesn't seem like it's going to be amenable to romantic-fantasy-style problem-solving, then the PCs will probably just turtle up and start murderhoboing instead. So what sort of things might one expect such a romantic fantasy game or setting to contain?

1: Injustice may be severe and commonplace, but it is neither inevitable nor invincible

As I've been emphasising throughout, romantic fantasy narratives don't have to be all sweetness and light; in fact, they're very often full of cruelty and darkness. But if you want PCs who are willing to go the extra mile to resolve situations without just killing everyone and taking their stuff, you need to make clear that the campaign world is the kind of place where things might be bad, but they can get better. If the tone is one of bleak, cynical amorality, where every petty tyrant you overthrow is immediately replaced by another one who's twice as nasty, then the players will very rapidly stop bothering to strive for a better world.

Let me repeat: this doesn't mean the setting has to be nice, but it does mean that it has to be improvable. Specific injustices can be ended. Cycles of violence can be broken. So let your PCs have the victories they work for, demonstrating to them that, with enough determination, they really can build a better world around themselves, even if it's only within the confines of their own community or home.

Characters in traditional fantasy RPGs often have very abstract motivations, like 'wealth', 'power', 'knowledge', or 'justice', or else by commitments which relate to abstract entities, like 'serve the Faith' or 'protect the Kingdom' or 'take over the world'. In romantic fantasy narratives, motivations tend to be much more personal: 'impress my elder sister', 'marry that guy I've got a crush on', 'get back at that woman who insulted and humiliated me all that time ago', and so on. By giving NPCs motivations like this (and by giving PCs ample opportunities to discover them), you'll make it much easier for PCs to steer, influence, and generally manipulate them via social interactions. Someone who just 'wants power' can't really be influenced except with straightforward bribes ('help me and I will give you this power') or threats ('help me or I will take your power away'), which reduces social interactions with them to a simple matter of logistics: if you don't have sufficient resources to credibly bribe or threaten them them, then you're out of luck. But someone who wants their big sister's approval is a proper character-based storyline waiting to happen: a storyline in which anyone can potentially play an important role.

In most romantic fantasy narratives, violence isn't exciting or fun; it's horrible. As a result, very few people are likely to do the whole 'attack on sight and fight to the death' routine so common in modern D&D games, because they know that wounds hurt and fights are terrifying and death is forever. Stumble across a bunch of dudes in a dungeon and they might well leap to their feet and point weapons at you - but then they'll hesitate, hoping that the whole situation can be resolved without them actually having to risk their lives, and that hesitation opens up a space for people to talk to one another; bribe, threaten, bluff, negotiate, whatever. This doesn't mean that the PCs can simply deal with situations by walking from one group of monsters to the next and saying 'Hey, let's be friends!', because - as mentioned - the world is a cruel place, and its inhabitants have been forced to adapt to its cruelty, which includes learning not to let their guard down; they'll have been hurt before, and will have every reason to expect that this latest bunch of strangers just want to trick or exploit them, too. But PCs who are prepared to make an actual diplomatic effort - to listen to what each group wants, to understand why they're doing whatever it is they do, and to try to find a non-violent solution to the situation in which they all find themselves - should have a decent chance of success, and may even be able to convert potential enemies into friends or allies, instead.

It's easy for fantasy RPGs to default to a paradigm in which only the movers and shakers really count. The PCs are important because they're good at killing people; the king is important because he has an army; the evil wizard is important because he can cast cloudkill; but the swarms of 0-level characters who circle around them are just unimportant extras. In a romantic fantasy game, though, this doesn't have to - and indeed shouldn't - be the case; there should be plenty of important characters, playing pivotal roles in whatever is currently going on, who are just ordinary people whose significance comes not from their ability to blow stuff up but from their emotional connections to those around them. The fact that the queen relies on her handmaiden for advice on her love life makes that handmaiden at least as important as the champion the queen relies upon to kill her enemies. Of course not every passing groom or maidservant can be a major character; but ensuring that a good number of the significant characters in any given situation are relatively ordinary should help to emphasise that this is a world in which emotional and social bonds are at least as important as sheer firepower.


I think that applying these five principles to any RPG should go a long way towards making them amenable to the style of play that I've been discussing, here - always assuming, of course, that you've talked to your players and checked that they're onboard with the whole idea first. (If they're not onboard with it, they'll sink it faster than you can say: 'Gosh, shooting the princess in the back and then stealing her tiara wasn't very romantic, was it?') The exact same set-up - a keep on an unsettled borderland region, for example, adjacent to a cave system inhabited by feuding humanoid tribes - will play out very, very differently if all the groups involved are presented as relatively sympathetic, willing to listen to reason, and bound together by personal connections and motivations, rather than simply as murderous savages who attack anyone trespassing on their turf. But these principles could be applied to almost any game, in almost any system, which brings me onto my last point: how does any of this fit in with OSR D&D?

These days, there are plenty of newfangled games around which build systems for social interactions right into the rules. Apocalypse World and its derivatives, especially Monsterhearts, place inter-character relationships at the heart of the rules, and indeed make them much more mechanically 'solid' than the kind of things that most traditional RPG rulesets generally try to model, while Fate would be an example of a more traditional game which tries to give social interactions the same mechanical 'weight' as physical ones (and, indeed, models them in pretty much exactly the same way). Social mechanics like these are very, very divisive among RPG players; some people love them, while others feel that such matters should simply be roleplayed out rather than reduced to a matter of dice-rolling, and/or deeply resent the idea that the dice can tell them what their character now thinks or feels, even if they think that she would actually be thinking or feeling something completely different. If you want a game which will mechanically model a conversation in the same way that an older game would model a sword-fight, then OSR D&D is obviously a terrible choice. If you prefer more traditional games, though, in which talking to people is modelled by, um, talking to people, then I think it has a lot to recommend it: it's quick, it's simple, most people are already familiar with it, the fragility of its characters serves to heavily dis-incentivise combat, and - as I've written about before - it actually has a surprisingly robust social interaction system in the form of the reactions, morale, and henchmen rules.


If you're playing in an explicitly romantic fantasy idiom, the only rules changes I'd suggest making are these:


These house rules, in addition to the general morale and reaction rules, should ensure that there is very often a chance for situations to be resolved socially rather than violently. Whether the PCs take advantage of that chance is up to them, but at least it'll be there.

So. That's the what, the why, and the how dealt with. In my next post - which should be the last one in this series - I'll try to explain why I'd describe ATWC as a romantic fantasy setting, and to give some concrete examples of what a traditional D&D adventure might look like if translated into a romantic fantasy mode...