All That Is Solid Melts Into Air: d100 encounters with onrushing modernity

'We have fallen upon strange times', wrote Dickens in 1839, 'and live in days of constant shifting and changes.'

Most fantasy worlds get by without ever really changing, apart from the odd cataclysm every couple of thousand years. It's all just kings and guys with swords, forever and ever and ever. Even if steampunk or clockpunk technology does exist, it's usually as a known quantity, something that's been around for long enough to be thoroughly integrated into the fabric of society.

My current interest in the 1830s and 1840s emerges from their status as crisis decades, in which everything was changing very fast, and no-one really knew how to cope with it. They worked it out in the end, of course, for better and for worse. But for a couple of decades there, everyone from the paupers to the prime ministers were totally making everything up as they went along.

Here's an Elfmaids and Octopi-style d100 encounter table suitable for any rapidly-industrialising city, mostly based on things that really happened in Britain between 1830 and 1850. Environments like this are full of rich pickings for chancers and opportunists. Your PCs should do just fine. 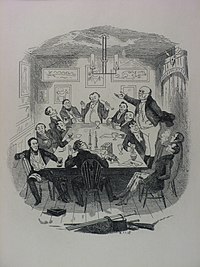