First up, a brief announcement: the kickstarter for Knock! issue three has now gone live, packed with material from the old-school blogosphere's finest. It will also have a couple of my articles in it, so if you've ever wanted to own a physical copy of my d100 problem-solving items table but couldn't be bothered to print it out yourself then this is your chance.

Anyway. Something mildly interesting happened in my game this week: the PCs were negotiating with a king to end a civil war, which had started when the king had framed a mostly-innocent nobleman for his own misdeeds. The PCs wanted him pardoned, and suggested that the king should instead pin the blame on a different, more powerful nobleman, who was (a) actually much guiltier and (b) a drunken wastrel whom nobody liked. The king baulked at this, which somewhat confused some of the players. 'Isn't he a drunken incompetent?' one of them asked. 'Yes', I replied, 'but he's a very rich and influential drunken incompetent!'

The negotiations moved on and a compromise was ultimately reached, but thinking this over I feel there may have been a disconnect between the assumptions that I and (some of) my players were bringing to the table. To them, I think that getting rid of a corrupt lord who was despised by his own people seemed like pure upside, something that should be easily acceptable to everyone who wasn't him. Whereas my assumption, roleplaying as the king, was that openly moving against a powerful regional magnate - even one he personally disliked - would be something that he'd want to avoid unless he felt that there was absolutely no alternative. This isn't the first time I've felt such a disconnect: in reading discussions of fantasy RPGs and similar online, I've sometimes seen the view expressed that pre-modern aristocracies are purely parasitic, something that can be circumvented or done away with without disadvantaging anyone other than the aristocrats themselves. Frequently these seem to be rooted in modern liberal-democratic assumptions that aristocracies are obviously stupid ideas, and that any society that has one would be better off getting rid of it as soon as possible.

Now, I myself believe in democracy, and I am very glad that I don't have to spend my life bowing and scraping to the guy in the castle down the road. But I also think that social forms develop for a reason, and that if most of Europe and Asia kept circling back to social systems built around powerful land-owning aristocrats for thousands of years, then that probably wasn't just due to some kind of historical accident. When people think of aristocracies, I think they often tend to think of nineteenth-century aristocracies, lounging in their stately homes, expensive and decorative and mostly useless. But pre-modern aristocracies have a function, one that is not easily circumvented before the rise of the modern state, and understanding this function can help in making settings where all the obligatory dukes and barons and whatnot actually have some reason to exist.

Pre-modern life is local. There are no accurate maps, no accurate census data, no accurate statistics: the only way you can properly learn about a region is by living there, not just briefly but for years on end. Learning who lives where, what they produce, what they trade, understanding the social fabric that connects each family or community to those around it... all this requires specific local knowledge, and there are no shortcuts to acquiring it. Under these circumstances, establishing an effective system of resource extraction (taxation, conscription, etc) is often going to be the work of years, if not of generations. Any thug with an army can ride into a major population centre, steal everything not nailed down, and ride off. But if he wants his power to extend into the woods and the hills, the hamlets and villages, then that thug and his family need to be prepared to settle in for the seriously long haul.

This is the service that the local lord provides. If they've been there for long enough, he and his relatives will have wound their tendrils deep into all the prominent local families, bought off or intimidated all the local village 'big men', and learned through a grim process of trial and error roughly what kind of tax burden can be extracted from the region without actually triggering famine and/or revolt. He's probably been hunting and hawking in the area his whole life: he knows where to find all the hidden villages nestled deep in the forests, the ones that will never appear on any official map. His family's grip on the area will often have been decades if not centuries in the making. If you just banish them and install someone else then it might take a long, long time before his successors are able to exploit the region with anything like the same success.

And above the local lord is the regional magnate, who is playing the same game one level up. As the local lords work their hooks into the local clans and prominent village families, so the magnate works his hooks into the local lords, gradually establishing a network of family ties and legal dependencies and bribes and threats and traditions and alliances that allow him to tap them for resources, and to call upon their aid in times of war. The whole system is intensely local and intensely personal: it's 'I know a guy who knows a guy' all the way down. A really well-entrenched regional magnate can run his domain like a petty king: the royal court can issue laws and proclamations, but the court is far away, and royal power can only extend out into the regions via networks of local intermediaries. In the little hilltop towns that the king has never heard of, the law is usually whatever the local lord says it is.

As a result, for a king to antagonise one of his regional magistrates is a really big deal. That magnate stands at the head of a patronage network that reaches all the way down into miserable, marginal settlements that only a few outsiders even know how to find, and alienating him - or alienating his family by executing or banishing him - risks disrupting the functioning of government across a whole chunk of the kingdom. Dispossessing his whole family and installing someone else could easily be even worse: while they'd presumably be loyal to you, it might take decades for their replacement to get a proper system of leverage up and running to replace the one you've just destroyed. (Remember, all of this is personal - a matter of 'you owe my brother a favour' or 'my cousin married your sister' or 'our grandfathers served together in the war' - and so none of it is straightforwardly transferable to a new candidate.) And of course there's always the risk that the offended magnate (or his family) will simply storm off and rebel, relying on their remote strongholds and local support networks to keep them safe. You'll probably win the resulting civil war - you're the king, after all - but winkling them out of their distant castles is probably going to be a slow and bloody business, and exactly the kind of thing that rival kings love to take advantage of if given half a chance.

So when the PCs in our session this week proposed to King Bahir that he should sacrifice Lord Maruf, I think that what they meant was 'You're the boss, so why don't you pin this whole mess on this under-performing middle manager?' But what I, in character as the king, heard was: 'Hey, that guy whose family network you rely upon to hold down the northern provinces and the border lords? The one whose people know how to extract tax revenue and conscript soldiers from the upland villages around the domains of the Broken One? He's expendable, right?' The fact that King Bahir personally disliked Lord Maruf was beside the point. He just couldn't afford to take that kind of hit unless he really had to.

Luckily, in the end the party circumvented the whole issue by staging an illusionary wizard battle in a desert instead! 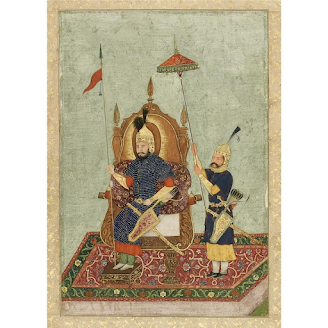