More encounters from the City of Spires: the desert

A year ago I posted tables of 72 encounters from the City of Spires, as a convenient means of recycling material from my ongoing campaign into something that other people might find gameable. As the game is still going on (and now approaching the two-and-a-half year mark, or five and a half if it's considered as an extension of the previous Team Tsathogga campaign set in the same world), I thought it was probably time for an update.

Since taking over their city the PCs have been spending more and more time in the outlying wildernesses, so I'm going to be doing three 1d10 encounter tables, one for each of the three biomes they've been most active in. This post covers the desert. Feel free to roll on them next time you need to stock a random hex! 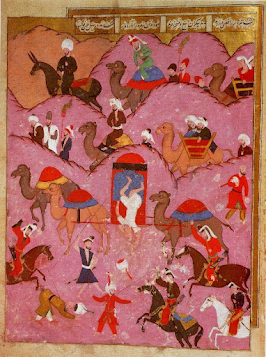 Deserts
1: Desert expanse roamed by nomad pastoralists, who travel between watering holes with their herds of goats, sheep, camels, and horses. Harsh experience has taught them to live in dread of the evil spirits of the desert, to whose wicked deeds they attribute all their misfortunes. A thriving market in protective charms, spells, and talismans exist among them, and the clans compete fiercely over those rare men and women believed holy enough to protect them from the devils of the wastes.

2: A trade road winds alongside the wadi here, watched over by linen-swathed desert giants, ten feet tall, leaning on gigantic spears. They are few in number and serve a human king, acting as his shock troops and honour guards, and demanding a toll from all who pass. The king's palace stands nearby, an ancient building divided awkwardly into human-scale and giant-scale areas. The giants are long-lived and more loyal to the palace than the man who rules it, transferring their loyalties each time it changes hands with little more than a shrug of their colossal shoulders.

3: City built by the side of a wide, shallow oasis, surrounded by stands of date palms and overgrown with sedges. The people of the city are famous for the manufacture of papyrus: in the heat of the day they sleep, and conduct much of their business by night, in streets lit by innumerable papyrus lanterns. Their ruler is a once-vigorous man, now sinking swiftly into indolence. In the dusty caravanserais the traders mutter that the desert clans no longer fear him, and that their demands grow more outrageous every year.

4: Here the desert clans have been driven from their watering holes by an aggressive race of diminutive lizard folk, who came surging suddenly out of the desert and have since been conducting excavations of certain long-abandoned buildings of baked brick that lie nearby. Their diggings have revealed walls painted with ancient frescoes, depicting beautiful androgynous figures dancing between pillars of fire. The lizardfolk are mute, and exactly where they came from and what they are looking for remains deeply unclear. The nomads who claim these lands would very much like them to be driven back into the wastes from whence they came.
5: A ruined city deep in the desert, raised up on a rocky plateau. In its central plaza a holy fire burns eternally, huge and hot enough to burn a man to ash. Any who come here are met by a white-robed spirit who asks if they come as pilgrims: any who say no are driven from the city by swarms of mute, dwarfish lizardfolk (see 4) who come pouring from the ruins to aid her. If they affirm that they are pilgrims then she will ask which of them is the celebrant: whomever is chosen will then be invited to step into the flame and be burned to death, so that their fellow pilgrims may ritually partake of their charred remains in the name of her god, whose name is both Fire and Hunger. Anyone who actually goes through with the whole ghastly rite will win the favour of her ancient divinity. A being of pure ritual, the spirit is easily confused by anyone who goes off-script, and quick-thinking PCs may be able to capitalise on this in order to escape.
6: Desolate dunes roamed by desert zombies, dehydrated animated corpses with flames flickering in their hollow eye sockets. They guard the lair of an undead sorceress, whose body animates only in darkness: in the light she is merely a corpse, clad in tattered crimson rags. During the day she lies buried beneath the sands, her tame bone worm coiled around her, but when night falls she and her mount rise up to resume their unholy work. In life she was a great architect, and knows many secrets of the famous palaces and temples of the world, their hidden tunnels and concealed chambers, having been responsible for designing many of them herself. Now she seeks the resting place of an ancient god once revered in these lands (see 5), confident that she would be able to tap its power for her own purposes if only she could build a temple over it in just the right way...

7: Dusty hilltop ruin encircled by bandit camps. The bandits chased a bunch of wizards in there a while back, and have been keeping watch on the ruins ever since to make sure they don't sneak out again. They haven't gone in after them because the wizards, in desperation, activated the slumbering stone golems with which the ruins are littered: now they cower in the ruins of the very manufactory in which the golems were once mass-produced, relying for protection on the ancient ward-lines that once kept them out of the manager's offices. The wizards have no way of controlling the golems, which now randomly attack anyone entering the ruins, though they're very much hoping to come up with one before they all starve to death...

8: Oasis city ruled by an aristocracy with ash-grey skin, marking them out at a glance from the general populace, who have normal dark-brown skin tones. Each year, the city's emir makes ritual offerings to the spirits of the oasis to ensure the prosperity of his city. He claims to enjoy the favour of the spirits, and those who defy him are dragged off into the night by the Misery Men: anonymous enforcers with jet-black eyes, their presence announced by a cold, damp smell like the bottom of a half-dried well. Among the people, mentioning (or even acknowledging the existence of) the Misery Men is believed to incur extreme misfortune. The remains of an immense rusted tank by the side of the oasis suggest that something was once contained here, although whatever it was must have leaked into the oasis long ago... (No further details - my PCs haven't got to the bottom of this one, yet!)
9: Wasteland haunted by clawed, burrowing humanoid scavengers the colour of charred meat, who sense tremors through the earth and dig their way up to sieze unwary travellers by night.  Though savage and feral, they are smaller than men and do not like to attack except by ambush. The smell of cooking meat will attract them from miles away, and a funeral pyre will bring them in swarms. If killed the bones within them are found to be black and charred, as though burned by some terrible fire, and are filled with cinders where their marrow should be.
10: The desert clans shun this region, roamed as it is by damaged but still-functional obsidian warriors, huge and mighty and almost-indestructible. Beyond them, in the heat-haze, can be glimpsed the bulk of an immense structure half-buried in the desert sands, its walls riven in ages past by some unimaginable violence. Sometimes the wind carries strange sounds from this building - distorted voices, hollow booming, the scrape of metal on stone - but since the fall of the cult of he whose name is both Fire and Hunger (see 5), none have successfully run the gauntlet of the obsidian warriors to discover what lies within... (No further details on this one - my PCs haven't been inside!)
Posted by Joseph Manola at 04:05