ATWC Base Classes 1: The Fighter 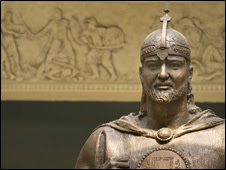 One of my goals with ATWC is to put together a version of OSR D&D without Vancian spellcasting classes like Magic-Users and Clerics. I'd much rather have a setting where magic is much bigger and weirder than OD&D's safe, reliable spell-slot system really allows for. As a result, I've come up with some variant base classes: the Fighter, Traveller, Trickster, and Scholar. Fighter and Trickster fill the fighter and thief niches, while traveller and scholar are closer to cleric and MU, respectively.

The fighter is the one that needed least changing; I've just taken the fighter from Lamentations of the Flame Princess, and given him a tiny bit of healing to compensate for the lack of cleric magic. I've also folded all that fiddly bend-bars-lift-gates stuff into a class mechanic. Finally, as with all my classes, I've borrowed the three-fold FORT / REF / WILL saving throw model from D&D 3. There's a lot wrong with third edition D&D, but in my view the simplification of saving throws into 'tough enough', 'fast enough', and 'strong-willed enough' was one of the things that they got right.

So here it is: the ATWC Fighter.

All my classes will require a base of 2,000 XP per level. (To be honest, I don't use experience points at all; characters level when I and their players agree that they've done so much cool stuff that it's reasonable they've learned something from it.) I don't anticipate any of my games going higher than level 10.
Posted by Joseph Manola at 11:03