Giving praise where it's (probably not) due: B9 Castle Caldwell


The original D&D Basic adventure series (modules B1-10, released 1978-86) gets quite a lot of well-deserved praise in OSR circles. Keep On the Borderlands (B2) is about as foundational as D&D adventures get; The Lost City (B4) and Night's Dark Terror (B10) are classics of the genre that still hold up extremely well today, and Horror on the Hill (B5) is a very solid adventure which manages to combine a whole lot of classic D&D-isms (haunted graveyard, weird underground labyrinth, a dragon in a cave, etc) into a satisfying and tolerably coherent whole. No-one, however, ever seems to have a kind word to say about module B9, Castle Caldwell. Having recently read it for the first time, though, I found myself... weirdly well-disposed towards it. Even its cover illustration - featuring a captive princess in distinctly un-medieval ankle boots and slit-to-the-waist skirts - wasn't enough to put me off. 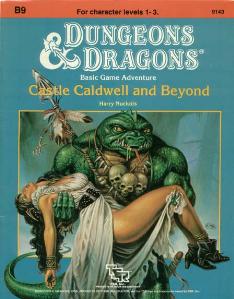 By most reasonable standards, Castle Caldwell is a terrible module. It consists of five very short adventures, each suitable for a single night's play. In the first one you go into a castle and get rid of the inhabitants. In the second one you go into the castle's basement and get rid of the inhabitants. In the third one you rescue a princess from the world's most overconfident kidnapper and his band of comically-accented minions. ('Hey, what are you guysss doing here? You are not with usss!') In the fourth one you get captured, trick a single incompetent jailer, and then fight your way out of a small outpost full of soldiers. In the fifth one, a heretical cleric steals a magic bell, and you have to steal it back. The maps are boring and repetitive. (What kind of medieval military outpost assigns a single room to every single soldier?) There are no interesting environments, monsters or treasures. All five adventures simply involve stomping through small dungeons, one room at a time, and the closest thing that any of them have to a twist is... well... I'll let the module speak for itself:

'Elwyn is a woman, but the information above has been written in such a way so the party will assume Elwyn is male. Allow the party to believe this so that they will not realise immediately that he woman's voice they hear when exploring the fortress is actually the voice of Elwyn.'

Oh yeah. Not using gender-specific pronouns in your intro text, in the hope that the PCs will then assume the ambiguously-gendered name of 'Elwyn' must belong to a man rather than a woman, and thus be shocked - shocked! - when it turns out that the woman's voice that's been taunting them throughout the whole adventure belonged to the villain all along. That's right up there with Citizen Kane.

Despite this, I rather like Castle Caldwell. I like the fact that the villains are all rubbish, that their minions suck, that their plans are stupid, that their security arrangements are laughable, and that their hideouts are so tiny that even the laziest PCs could clear them out over the course of a few hours. Take adventure 3, 'The Abduction of Princess Sylvia'; the titular princess is carried off by a magic-user named Oliver, whom, we are told, 'is very sure of his abilities, and believes that he and his gang can withstand anything short of a full-scale war'. So what does this near-invincible 'gang' consist of? Ten goblins, seven lizard men, and an owlbear, hiding in a cave. The cave doesn't even have a front door: just a twenty-foot wide entrance tunnel perfect for being stormed by superior forces. But wait, it gets better: Oliver doesn't even have competent minions! The goblin on guard duty at the front door is asleep on the job when the PCs turn up. The two goblins in the kitchens are so sick of peeling potatoes that they're willing to sell out their comrades 'after a little persuasion' to the first band of heavily-armed crazies who wander in. These guys are absolute bottom-draw villain material, and we don't get enough of that. Most adventure writers try to talk up how scary and dangerous their bad guys are. It's refreshing to see the reverse instead.

This is taken to an extreme in the first adventure, 'The Clearing of Castle Caldwell', which doesn't even have villains in any meaningful sense. The inhabitants of the castle (discounting its basement, which is protected by an arbitrary plot device and cannot be accessed until adventure two) consist of the following:

You see what they did there? Normally the PCs are supposed to be the underdogs, fighting their way through a dangerous location against overwhelming odds; but here, the PCs are the most dangerous thing in the castle, and all the NPCs know this and act accordingly. No suicide charges, no bizarre delusions that even though the PCs have successfully hacked their way through ten rooms full of monsters already, they can totally take the party on and win; just a bunch of castle-dwelling weirdos who know that their time is up and would quite like to get out of here with their lives and treasures intact. The only creatures that are automatically hostile are unintelligent monsters, and even they can be dealt with non-violently in some cases; just leave the cobra's nest alone, and give the wolves something to eat. And given the map, a really conflict-averse party could just spike the doors shut on the remaining handful of beasties and wait for them to starve to death.

Unsurprisingly, this sort of thing is very, very rare in D&D modules. PCs are usually put up against very stiff opposition; in old-school modules they're supposed to overcome them through careful planning and negotiation, whereas in new-school modules they're just supposed to kill them all using the zillions of combat abilities written on their character sheets. The fact that most people who bought or played Castle Caldwell were presumably hoping for a satisfying challenge is probably a big part of why it has such a poor reputation; but if you embrace the kinda-rubbish-ness of it all, I think it could be a lot of fun, at least as a change of pace. If your PCs are the kind of players who just kill everything, then it'll be pretty boring; but if they're not then this stuff could be roleplaying gold, tense and sad and funny all at once, and given some weight by the fact that 1st level BD&D characters are so fragile that if they really do force a fight, even a sleepy trader with a shortsword could easily end up taking someone down with him. What do you do with a bunch of bandits (and a mule!) who just want to run away with their (presumably stolen) treasure? With a notionally-evil cleric who actually just wants to lead you in a peaceful round of prayers? Weird, sleep-loving 'traders' who are obviously terrified of you? Goblins who just want to be left alone? A really diplomatic party could probably end up making friends with almost everyone in the castle, turning them into a cast of recurring NPCs or henchmen for adventures still to come.

Did Harry Nuckols, the author of Castle Caldwell, intend any of this? Probably not. Probably he was just trying to write generic D&D adventures and wasn't very good at it. But I find the end product oddly inspiring, and it makes me want to run at least a session or two where, for once, the challenge is not 'how do we survive this overwhelming threat?', but 'how do we get the best outcome from this mildly dangerous, but also mildly comical situation?' What if, just for once, the bandits are stupid kids who've made some bad decisions that they are rapidly coming to regret, instead of being ruthless outlaws? What if, instead of being a budding Evil Overlord, the necromancer is just some loon with delusions of grandeur who stumbled across enough magic to be (slightly) dangerous? What if, when you did the whole classic mid-dungeon negotiations with weapons drawn on both sides, it was the monsters who were desperately hoping to be able to get out of the room without a fight? You'd never want it to be the default setting; but from time to time, I think that having the PCs set out loaded for bear and end up coming face-to-face with a mildly aggressive duck instead could be a lot of fun. If nothing else, it would help to break up the tyranny of each encounter always being a tough-but-fair fight every single time...
Posted by Joseph Manola at 04:05