Districts of the Wicked City 4: The Streets

Before the Wicked King rose to power, this city had a population of almost a million souls. Today, it's less than half that, and the people that remain cluster heavily in the centre of the city, around the Cobweb and the Great Bazaar. As a result, the rest of the city is badly under-populated; families of three or four live in houses built for twice that number, in streets where half the buildings have long since been abandoned and fallen into ruin. Rubble litters the half-deserted streets; grass and flowers grow between the cobblestones of neglected squares and marketplaces. Here and there one comes across little clusters of habitation like villages amidst the wilderness: a few streets where all the houses are inhabited and in good repair, where the streets are clear and the children run and play in shrieking crowds. But for every such cluster there are streets and streets of ruins and rubble and weeds. 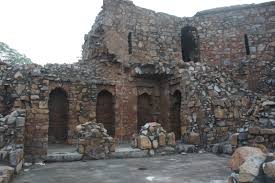 By day, the streets of the Wicked City are more sad than dangerous. The statues of the king stand on every corner, and anyone who says or does anything seditious where the statues can see or hear them will promptly be disappeared by the secret police, but aside from this the tyranny of the Wicked King rests a little more lightly, here; patrols by the King's Men are relatively infrequent, and the districts are largely left to run themselves. The people grow vegetables in what were once parks and gardens, and scavenge amidst the rubble for materials with which to keep their own homes in repair. By night, they take on another aspect; at dusk the people bar their doors and shutters, and refuse to open them for anyone they do not know. Navigating the rubble-choked streets becomes weirdly difficult; roads seem to twist and turn like serpents, buildings rearrange themselves at random, and paths unexpectedly turn into dead ends while no-one is looking. Through this bizarre, shifting nocturnal cityscape roam the other inhabitants of the districts: the crazed hermits, the criminal gangs, the malfunctioning clockwork robots, the junkies who've taken so many weird serpent-man drug cocktails that they're barely even human any more. Enormous vermin, too; giant rats, giant spiders, giant cockroaches, giant centipedes... no-one ever sees them during the day, but by night, there they are, digging through the rubble and scurrying through the abandoned courtyards. Most are the size of dogs, but some are bigger. Some are much bigger.

Smart PCs will make as many friends and allies as possible amongst the people of the streets. By day, being friends with a few families who live out in an otherwise-deserted district might not seem like much; but by night, when that same district turns into a nightmare of looping streets and shuffling buildings and drug-addled crazies and rats the size of ponies, having someone who's willing to open their doors to you can mean the difference between life and death.

(Of course, the really smart thing to do would be to avoid going out after dark entirely. But since when have PCs ever been able to manage that?)
Posted by Joseph Manola at 16:29