Districts of the Wicked City 6: The Maze

A little more than a hundred years ago, a new religious movement took root in what would later become the Wicked City. They preached what they called the Labyrinth Doctrines: that the physical world was a maze in which the soul was trapped and tested, until - over the course of many lifetimes - it finally managed to free itself from error and sin, escaping into the spiritual realm beyond. The city became a great centre of the Labyrinth Doctrines, and adherents flocked to it from many lands, hoping to learn from its spiritual teachers how best to further their progress through the world-maze. Finally, under the leadership of a charismatic but rather literal-minded leader, the faithful began work on a great project: the construction of an actual labyrinth, hewn out of the rock and earth beneath the city as a form of penitential labour. Those who built it were assured that the work would benefit their souls, and the labyrinth itself was conceived of as a kind of spiritual forcing-ground, in which pilgrims would be confronted literally and directly with the kind of tests and quandaries which might otherwise take them many lifetimes to encounter, thus allowing their souls to make rapid progress towards their ultimate escape from the prison of the physical world.

For thirty years, the Maze grew: at first little more than a series of ritual chambers, then an elabourate complex of shrines, meditation rooms, and arenas, and finally a sprawling labyrinth in which many of the faithful dwelt for months or years at a time. After the death of the leader who had initially planned it, the followers of the Labyrinth Doctrines schismed into several competing sub-sects, each of which seized control of one section of the Maze and continued to extend it in its own direction, in accordance with its own interpretation of what would be most spiritually beneficial to those who walked their halls. Competition between the sub-sects became vicious; there were rumours of sabotages, disappearances, furtive episodes of sectarian violence erupting down in the dark. The digging became more frenzied than ever. Each sub-sect was convinced that its own version of the Maze was nearing complete perfection, and that the day was fast approaching when a pilgrim would need only to walk each hallway and pass each test to achieve complete clarity of soul. Shortly afterwards, one of the sub-sects walled themselves up inside their Maze, and all contact between them and the surface was lost.

Shortly after that, the man who would become the Wicked King appeared at the gates of the city, as if from nowhere, and began his meteoric rise to power. It is widely speculated that these two events may not have been unrelated. 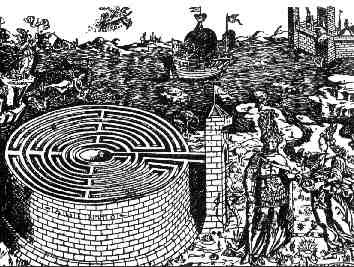 Today, the main entrance to the Maze is blocked, choked with rubble beneath the collapsed School of the Labyrinth Doctrines; but it can still be accessed, for enterprising souls have mined their way into it in a hundred places. All across the Wicked City there are basements and sub-basements, sewers and secret passages, which contain connections to the Maze. The King has no statues there, and as a result its upper levels have become a haven for plotters and fugitives and would-be revolutionaries, who set up makeshift bases in abandoned ritual chambers and plan how best to bring the reign of the Wicked King to an end. Further down can be found the remaining followers of the original Labyrinth Doctrines, who still try to practise their faith as best they can, relying on their unparalleled knowledge of the Maze to keep them safe from their would-be persecutors. Below them, things get creepy: in the tunnels dug by the maddest of the sub-sects, the passages twist and branch at random, punctuated by lethal traps built as insane tests of scriptural knowledge or spiritual purity. Bands of blind cultists sit chanting endlessly in the dark, living on the fish that swim into their flooded subterranean temples, and scratching prayers on the walls with their fingernails; mad hermits maintain decades-long vigils in disused underground shrines, waiting for the day when a pilgrim will finally arrive to be tested. Many sections are haunted by the ghosts of all those who died down there; unable to find their way out of the Maze and proceed to the afterlife, their spirits have become crazed and cruel and vengeful, filled with hatred of the living. The lowest sections are mostly flooded, their waters inhabited by strange pallid monsters which have never seen the light. Many treasures are said to be lost down there: sacred relics, books of esoteric wisdom, offerings of gold and jewels, and perhaps even the secret of the Wicked King's origins. Very few, however, are bold enough to go in search of them; and of those, even fewer return.

For PCs, having allies amongst the saner dissidents and cultists of the Maze will be a real asset: not only is it the only genuinely statue-free zone of the whole city, it also provides a relatively safe and inconspicuous way of moving people and objects from one district to another without being observed by the statue network or the secret police. Trips further down are likely to be made only in moments of exceptional need; but if you want an excuse to run a dungeon crawl in the Wicked City, all you need to do is map out a dozen or so rooms of the Maze, add some treasures, traps, monsters, and cultists, and you're set. The secret of defeating the Wicked King could easily be hidden down there, in the cold, wet darkness of the lowest levels; but the Maze will not yield up its treasures without a fight.
Posted by Joseph Manola at 06:54

Email ThisBlogThis!Share to TwitterShare to FacebookShare to Pinterest
Labels: Religion, The Wicked City