Districts of the Wicked City 5: The Rubble

A decade after the Wicked King disappeared inside his tower for good, a fire broke out in one district of the city. The response was slow, disorganised, chaotic; the weather was dry, the river was low, and the flames spread with terrifying speed. By the time that the King's Men managed to get the situation under control (by blowing up whole streets of houses with gunpowder to turn them into firebreaks), several square miles of the city had been reduced to blacked rubble.

Fires happen all the time in cities, and normally the damage they do is rapidly rebuilt. But the Wicked City was built to house a population so much larger than the one which currently inhabits it that no rebuilding actually took place; the people displaced by the fires just moved into vacant houses elsewhere in the city, and left the burnt-out districts to lie in ruin. The authorities abandoned it, feeling it not worth their while to patrol; and so, over the years, a strange wilderness has grown up right on the city's doorstep. The blackened stone is all overgrown, now, and animals have come creeping back to live among the fallen buildings; for some reason, poisonous snakes seem to flourish there with particular vigour, growing huge and colourful and quite spectacularly deadly out amidst the shattered streets. They don't live there alone, though: every few years the King's Men carry out a sweep of the streets, round up all the junkies and crazies and general undesirables, and drive them into the ruins where they'll be less of a nuisance to everyone, with promises of death if they ever dare to return to the city proper. Over the decades, a bizarre half-feral culture has developed among these outcasts; they now consider themselves to be almost an ethnicity, bonded together by their pariah status and their shared experience of life-threatening initiation rituals involving huge quantities of snake venom and hallucinogenic mushrooms. They know every snake nest, every deadfall, every secret path through the ruins. They call themselves the People of the Rubble.


When the city was at its height, the districts which now comprise the Rubble were home to almost two hundred thousand people. Today, their population is less than 1% of that. The People of the Rubble live in a half-dozen semi-permanent encampments, each of which is surrounded on each side by at least half a mile of uninhabited overgrown ruins. Being unstable, partially flooded, and infested with poisonous snakes, these ruins would be hazardous enough under any circumstances; but the People are intensely suspicious of outsiders, and have added to the natural dangers of the district by rigging the ruined streets and houses with all manner of traps. Hidden tripwires placed so as to send their victims tumbling out onto particularly nasty falls; false floors concealing drops into flooded basements; shallow pits full of short, poisoned spikes, covered with leaves, waiting to impale the feet of unwary travellers; these, and many more, await those who trespass in the Rubble. Most people, unsurprisingly, leave the district well alone. 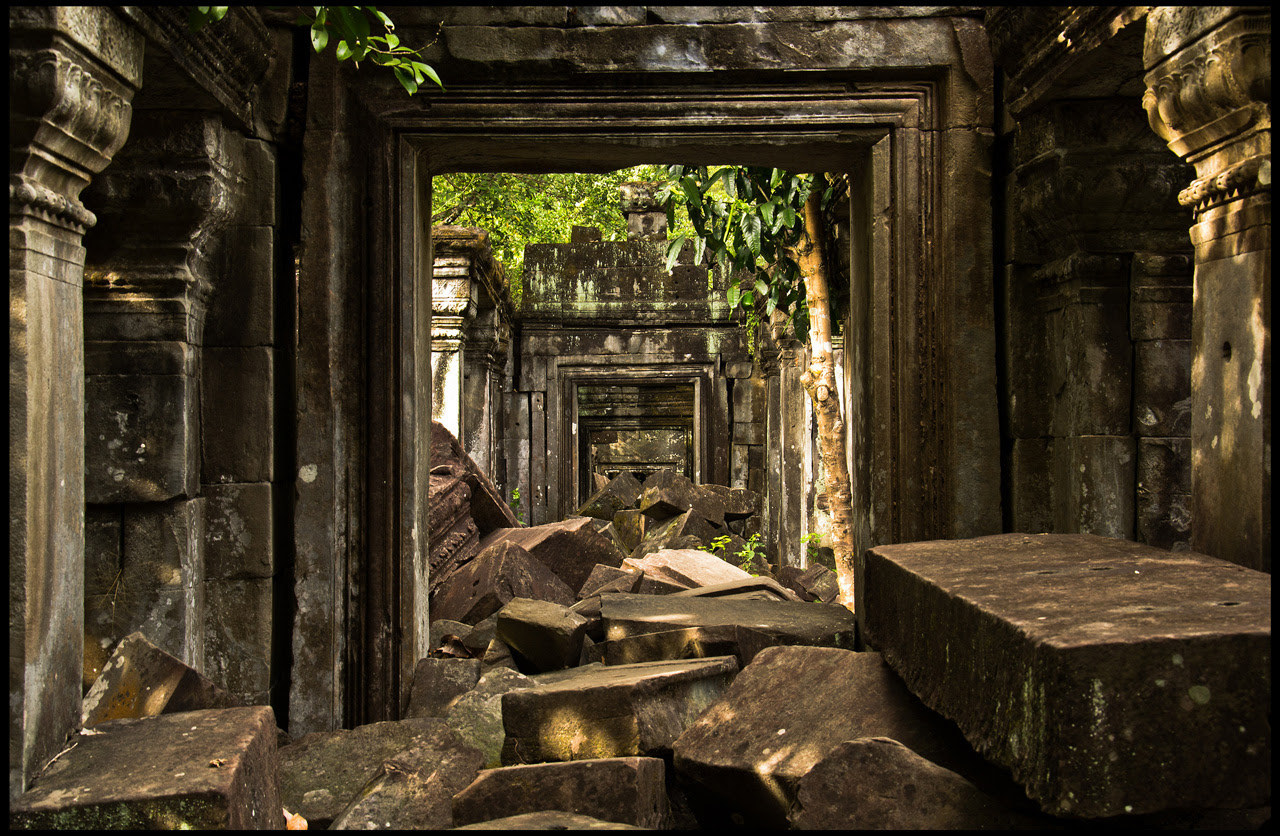 For those who have no love of the Wicked King, however, the Rubble offers something of great potential value: an area of the city in which almost all his statues have been smashed to pieces, and in which people may thus act and speak openly without fear of being observed by whatever it is that watches the rest of the city through the eyes and ears of the statue network. Moving through the Rubble, one may come very close to the edges of the Grand Bazaar and the Cobweb without fear of the statues, or the King's Men, or the secret police. If the People of the Rubble can be befriended, the district can even be a shelter in times of trouble; the King's Men regard the whole area as a deathtrap (with good reason), and are extremely reluctant to pursue fugitives beyond its borders. Of course, befriending a tribe of feral drug-addled lunatics with a collective snakebite fixation has its own difficulties; but when was anything ever easy in the Wicked City?
Posted by Joseph Manola at 10:53