Wheels within wheels: clockworkers and scrap mechanics of the Wicked City

Compared to its state a century ago, when it stood at the zenith of its prosperity, the Wicked City is a shadow of its former glory. Its streets lie in ruins. Its population has fallen dramatically. Its farmlands are turning to desert. Its state religion has become a hollow farce. But one segment of the city's economy which has not declined are its clockworking industries: and in this area, at least, the city retains its world-leading status, just as surely as it did before it lost its name.

Before the rise of the Wicked King, the city became preeminent in clockworking because its coal mines made it cheap to build and power metal automata, and because its position at the hub of the Great Road made it easy for its merchant dynasties to attract the most talented mechanics from both the eastern and western empires, sure that they would be able to find markets for their wares. Since then, the city has retained its edge largely because of the enthusiasm with which its government has invested in clockwork technology, ensuring that the clockworking guilds have never lacked for patronage. The government's willingness to tolerate the excesses of the Steel Aspirants has made the city a major centre for the cult of the Cogwheel Sage, and the low price of coal means that it still has a substantial community of Brass Folk: after all, they can 'eat' there more cheaply than they can anywhere else. 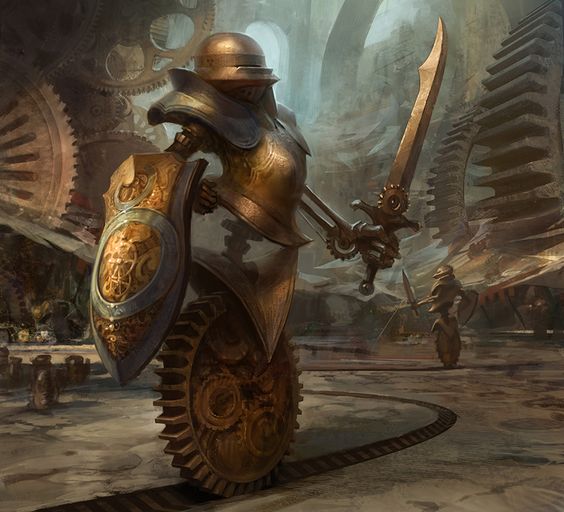 The innumerable automata upon which the city's economy depends are manufactured partly by the Brass Folk, and partly by the old clockworking guilds, many of whose constituent families pride themselves upon having been clockworkers for three or four generations. Their guildsmen are a fussy and elitist bunch, much preoccupied with family trees and certificates of mastery, and deeply disdainful of interlopers and outsiders. It is their workshops which produce the heavy, ornate, slightly oppressive-looking clockwork machinery for which the Wicked City is famous the world over: it is their sons and daughters who maintain the gyrocopters of the Air Corps, and serve as mechanics in the King's Own Armoured Brigade. Their business practises are slow and obfuscatory, and the Ministry of Technology would like to dispense with them entirely; but no matter how much the minister might dream of uniformity and standardisation, clockworking remains iredeemably artisanal in nature. It is precise, fiddly, and technically demanding work, of a kind that favours obsessives and virtuosos: every workshop has its own house style, and every master teaches their own distinctive tricks and methods to their apprentices. Attempts by the Ministry to train whole regiments of slave-mechanics to a uniform standard have met with very limited success.

In most parts of the world, the expensive tools, materials, and training required to create clockwork automata ensures the craft is practised only by licensed masters and their apprentices: but modern clockworking has been practised in the Wicked City for over a century, now, on a scale which has made the maintenance of true monopolies impossible. Tools get stolen. Supposedly 'secret' methods get taught to curious friends or lovers. Mistreated apprentices run away and take their knowledge with them. Knowledge-hungry slum-kids catch stray clockwork songbirds in nets, and spend endless hours painstakingly taking them apart to see what makes them tick. As a result, alongside its official clockworking schools, the Wicked City has become home to a vigorous 'street clockwork' tradition characterised by ingenious use of improvised materials. For every 'legitimate' clockworker family operating out of a licensed workshop, there is at least one unlicensed scrap mechanic working in a hidden basement, cobbling together devices out of whatever salvaged fragments come to hand: and the asymmetrical kitbashed products of their labours can be often be glimpsed scurrying over the rooftops of the Wicked City, catching the evening sunlight with a dull glint of tarnished brass. 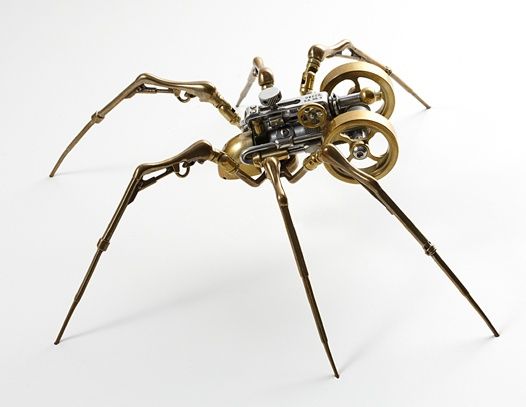 The unofficial symbol of the scrap mechanics is the cogworm. Little more than an adjustable tube of gears with a crank at each end, the cogworm allows power to be leeched from one machine to another: the user simply attaches the worm to moving machinery in such a way that the machinery turn the crank at one end of the tube, and then attaches the crank at the other end to the machine which requires winding, thus turning its key and winding its mainspring. Most scrap mechanics have, by dint of long practise, become extraordinarily dexterous in the use of cogworms: leave them alone with a large automaton for even a couple of minutes and it will end up with cogworms dangling off every part of it, like a horse that's just emerged from a leech-infested bog, each of them feeding power to some whirring contraption hanging from the other end. Many street automata actually incorporate cogworms into their bodies, which emerge like lashing metal tentacles to opportunistically siphon energy from any exposed machinery that may happen to be nearby. When draining power from other people's machines isn't an option, the scrap mechanics use homemade windmills or waterwheels, instead. Actually paying for coal is a last resort.

The scrap mechanics have found all kinds of niches for themselves within the city's grey economy, cobbling together everything from primitive washing machines for laundresses to clockwork messenger birds for gangsters. They employ gangs of street kids to gather scrap metal for them from the city's dumps, and make occasional excursions out into the countryside to loot rusted machinery from the city's old pumping stations - a practise which often brings them into conflict with the pig-men who now infest the abandoned irrigation tunnels. They are fiercely proud of their inventiveness and originality, and delight in competition, constantly facing off against one another in various contests of clockworking skill - everything from simple races in which the fastest automaton wins, to tournaments between chess-playing clockwork robots, to grand events in which whole teams of clockworkers will labour for months to assemble clockwork war machines which are then pitted against one another in battle. The city's gangsters often come to bet on these events, and the drink and drugs flow freely - a quality which has given them a near-legendary reputation among the apprentices of the legitimate clockworkers, many of whom secretly dream of sneaking away from their masters and becoming champion scrap mechanics in the slums, instead. In most cases these dreams lead them no further than occasionally creeping out to spend a night illicitly watching a clockwork street race, but every veteran guildsman can tell stories of promising but unruly apprentices who sneaked out one night and simply never returned, choosing lives of precarious outlaw glamour over the security of wealth and status that might otherwise have been theirs. 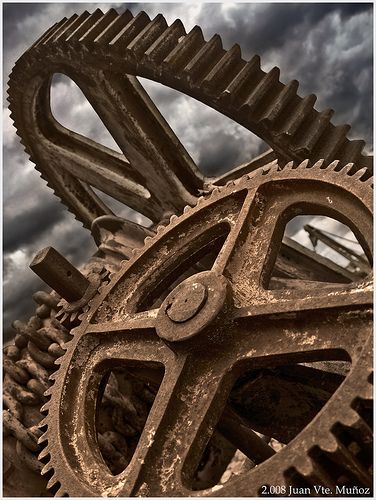 To find out what the local clockworker's guild is up to, roll 1d10:

To find out what the local scrap mechanics are up to, roll 1d10:


(EDIT: The Scrap Mechanics and the Clockworker Guilds have now been added to my post on liberating the Wicked City.)
Posted by Joseph Manola at 16:57